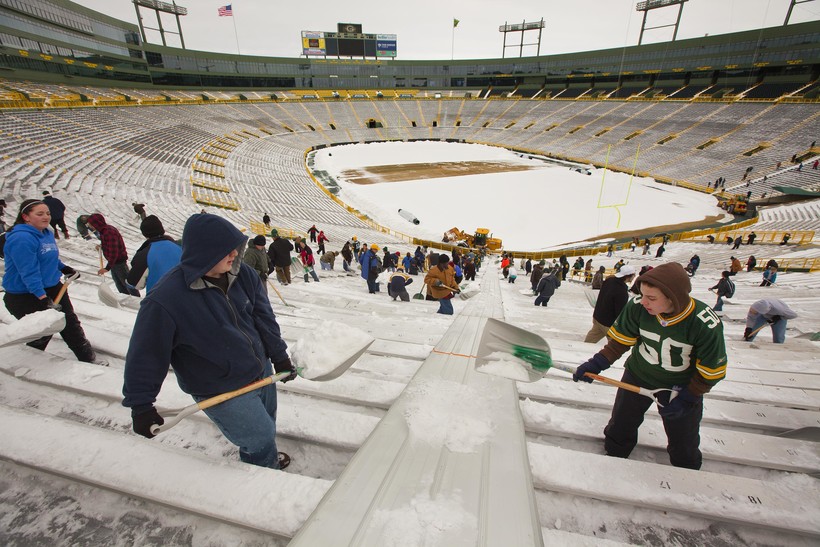 As Heavy Snow Heads For Parts Of Wisconsin, Packers Put Out Call For Snow Shovelers

The weather service issued a winter storm warning for southeastern Wisconsin that’s in effect from 7 p.m. Friday to 6 a.m. Sunday. It includes the cities of Milwaukee, Janesville, Racine and Kenosha.

In those areas, residents could see 2 to 5 inches of snow and up to a quarter inch of freezing rain through Saturday morning.

"Up to a quarter inch of ice will impact far southeastern Wisconsin, along and southeast of a line from Janesville to Milwaukee," the weather service said in a statement.

An additional 6 to 9 inches of snow is possible Saturday night along and south of a line from Darlington to Port Washington. Near Lake Michigan, wind gusts could reach up to 40 mph.

At a Friday news conference, Milwaukee Mayor Tom Barrett said the city is prepared to respond to the storm. Streets are being treated with salt brine to prevent ice from binding to the pavement, he said. Snow plow drivers and more than 350 pieces of heavy equipment are at the ready, he added.

"The storm looks to be severe, so relax," he said. "Stay home. Don't travel if you don't have to."

He also encouraged residents to follow Milwaukee's winter parking restrictions to make it easier for snow plows to clear the city's 7,000 miles of streets.

In northeast and north central Wisconsin, a winter storm watch will be in effect from Saturday afternoon through late Sunday night. According to the weather service, snow totals of 5 to 10 inches are possible. Winds could reach up to 40 mph in the Fox Valley, Hykin said.

"Strong north to northeast winds will increase the potential for ice shoves, lakeshore and bayshore flooding and shoreline erosion," according to a weather service statement.

Travel will be difficult across the affected areas. With the high winds, Hykin said blowing snow could cause visibility issues for drivers.

There is still uncertainty around how the storm will develop, she said. Recent models predict lesser precipitation than was originally expected, but that could still change, Hykin warned.

"Things may become a little bit clearer for us later tonight into tomorrow morning," she said.

The storm could affect fans who are traveling to Green Bay for Sunday’s NFL playoff game. The Green Bay Packers kickoff at 5:40 p.m. Sunday against the Seattle Seahawks. 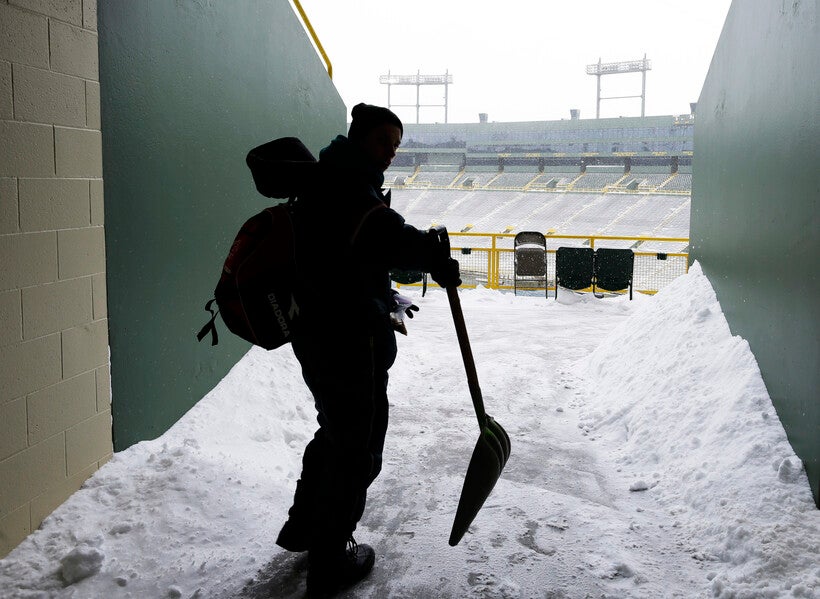 The Packers put out a call Thursday for 700 snow shovelers to help clear out Lambeau Field on Sunday morning.

Aaron Popkey, the Packers’ director of public affairs, said they’ll start shoveling at 6 a.m. and aim to have the shovelers done by 1 p.m. In his 27 years with the team, Popkey said this is the first time the Packers have required a clean out on game day.

But it isn’t the first time this season the Packers have required shovelers. Most recently, they were brought in on Friday, Dec. 13, to remove snow before the Packers beat the Chicago Bears on Sunday, Dec. 15.

The Packers typically call for 600, Popkey said, but they increased the number for this weekend due to the quick turnaround. Popkey said they have some regulars, but it tends to be a mixture of people who show up to shovel.

"We suspect there will be some folks who are just simply in for the game and will find this to be among the more unique opportunities in terms of a weekend activity that will be available," he said.

Others do it to earn a little extra money, especially around the holidays, he said. The Packers pay shovelers $12 per hour in cash.

Despite the pressure of getting the stadium ready for kickoff, Popkey said shoveling at Lambeau Field has become a right-of-passage in northeast Wisconsin.

"It's something that adds a little excitement to the whole game weekend atmosphere and electricity," he said.

Popkey encourages fans to be careful traveling to the game and getting around the stadium. Though temperatures are expected to be relatively mild for the Wisconsin winter — in the mid-to-low 20s, he also said fans should dress in layers.

"We always like to remind folks to prepare for anything," he said

Popkey also said the Packers have added some "bells and whistles" for the playoffs. Fans can expect to see more pyrotechnics and other touches to add to the excitement of game day.