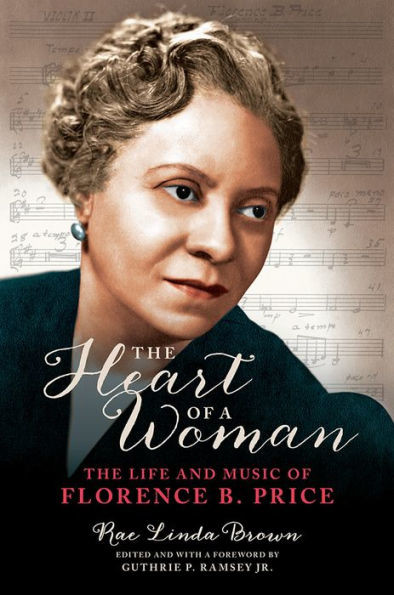 The Heart Of A Woman

The Life And Music Of Florence B. Price
By Jonathan Overby
Share:

It has long been my view that hosting a radio program is a gift. And one of the many benefits of doing so is the privilege and opportunity to introduce new music to listeners. In my case, that benefit extends to announcing upcoming events, concerts, topical album releases, and publications dedicated to music.

Today, I'm pleased to introduce the newly released 2020 publication, "The Heart Of A Women," The Life and Music of Florence B. Price. The book, written by the late Rae Linda Brown, and published by the University Of Illinois Press is "the first-ever" biography of Price.

Florence B. Price, was an African American composer who has roots linked to Little Rock, Arkansas (just a rock's throw from Pine Bluff, Arkansas, where my grandparents lived until the 1920s before departing for Milwaukee, Wisconsin), is a noted American composer.

Recent attention to the work of Price is worth noting, though her reputation outside careful study and research on African American classical music has historically been under explored.

For many years I've had several of her recordings in my library, aired them, shared them with colleagues while marveling at her music-making even though I knew far too little about her.

Over the years, I've made it a point to collect as many publications on African American classical music artists and composers. In doing so, I found it curious that many of the citations in previous publications failed to adequately illumine the full life, breadth of, and body of work by Price.

Price is the author of many impressive compositions in choral and vocal music, art songs, and arranged spirituals, including instrumental music orchestral suites, and thoroughly composed symphonies.

The musical life of Price overlapped with that of other African American giants in Eurocentric classical music composition. They include but are not limited to William Grant Still (who seems to forever be the go-to composer for traditional music hosts especially during Black History Month), Samuel Coleridge-Taylor, Scott Joplin, Nathaniel Dett, and Harry T. Burleigh.

The Heart Of A Woman reveals several intriguing details about Price who, like her contemporary colleagues, women, and men, suffered from the same social challenges that African Americans faced during her life in the United States. And as the book reveals, not all were wedded to racism.

My copy of the book just arrived and I'm already turning the first pages of what author Naomi André describes as "a richly texture tapestry that reveals Price in her well known roles as ground breaking composer."