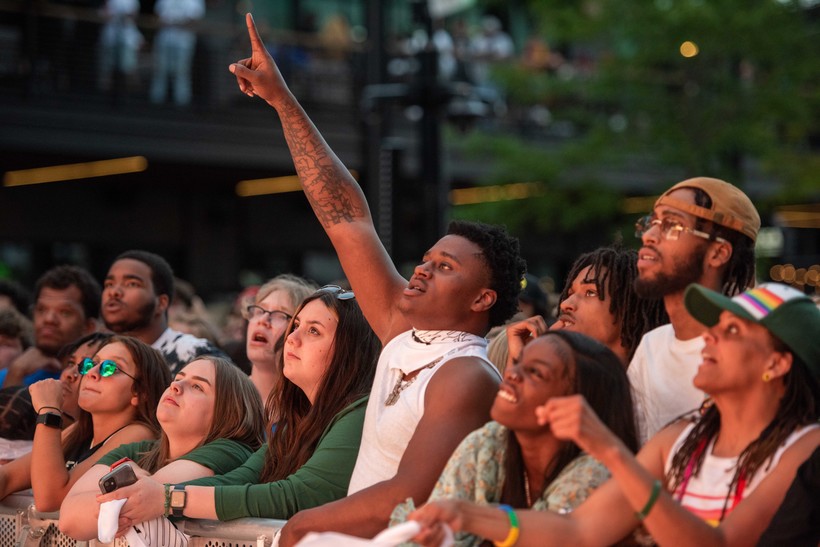 'For The Haters': Bucks Prepare For Conference Finals Against Hawks

The Milwaukee Bucks open their Eastern Conference finals series against the Atlanta Hawks on Wednesday night at Fiserv Forum.

It took seven games for Milwaukee to knock out the Brooklyn Nets in their semifinal series. Now the Bucks are left with an incredible opportunity: With just four teams remaining, they’re considered the favorite to win an NBA title — their first since Kareem Abdul-Jabbar was a member of the team.

And the city is excited, with thousands of fans crowding the Deer District to show their support during games in the last series.

Alder Khalif Rainey even issued a statement for the haters: "Keep bringing the disrespect, so the Bucks can keep turning it into jet fuel that they’ll use to propel the team to its first NBA championship in 50 years!"

His message came after ESPN broadcasters said they didn't want to travel to Milwaukee to cover the games. But Alex Thomas disagreed with their sentiment. He came up from Illinois for the game.

"I think it's great. I think Aaron Rodgers should stay," he joked. "I would move here for sure." 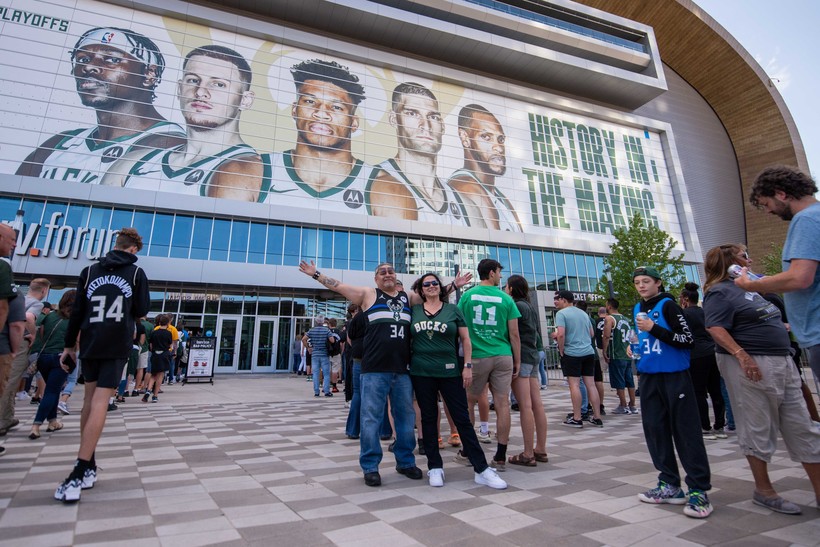 People gather outside the Fiserv Forum on Wednesday, June 23, 2021 in Milwaukee, Wis. The Milwaukee Bucks open their Eastern Conference finals series against the Atlanta Hawks on Wednesday night. With just four teams remaining, they’re considered the favorite to win an NBA title — their first since Kareem Abdul-Jabbar was a member of the team. Angela Major/WPR

Hours before tipoff, there were already crowds of fans waiting to head into the game or watch it on the big screens in the plaza. The music was pumping and almost everyone was decked out in Bucks gear. There were lines of people waiting to enter Fiserv Forum and fans watching the end of the Milwaukee Brewers' win over the Arizona Diamondbacks.

Crystal Morrell and her son, Jordan Rowls, were among them. She surprised Rowls with tickets for his 17th birthday. He predicted Bucks star Giannis Antetokounmpo would post a triple-double and Milwaukee would win Game 1. He has the Bucks winning the series in seven games. 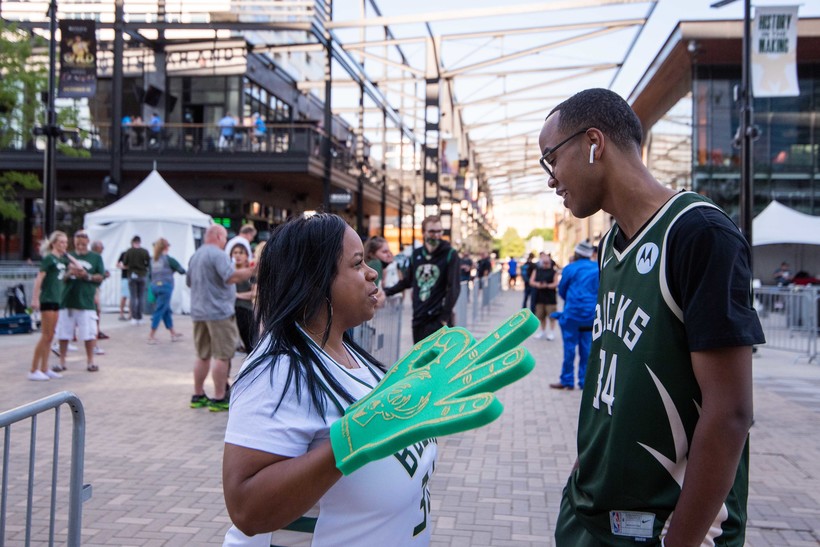 Cody Rome, who lives in Milwaukee, said it feels like a sense of normalcy is returning to the city after the coronavirus pandemic. He was enjoying the ambiance in the Deer District before heading into the game, his first of these playoffs.

"We’re just going to hang out for a little bit here and then go in, but I’d be happy to watch the game from out here too," he said.

Douglas Page picked the Bucks to win in five games. He and his brother, Patrick, drove up from Illinois, after buying tickets on StubHub. There were a lot of stressful moments in Milwaukee's last series, they said.

And of course, the Bucks have another tough opponent standing in their way of the NBA Finals.

The Hawks were underdogs going into both of their early-round matchups, especially against the top-seeded Philadelphia 76ers. The Sixers didn’t get great play from their stars, including Joel Embiid, who struggled with a knee injury in the series. 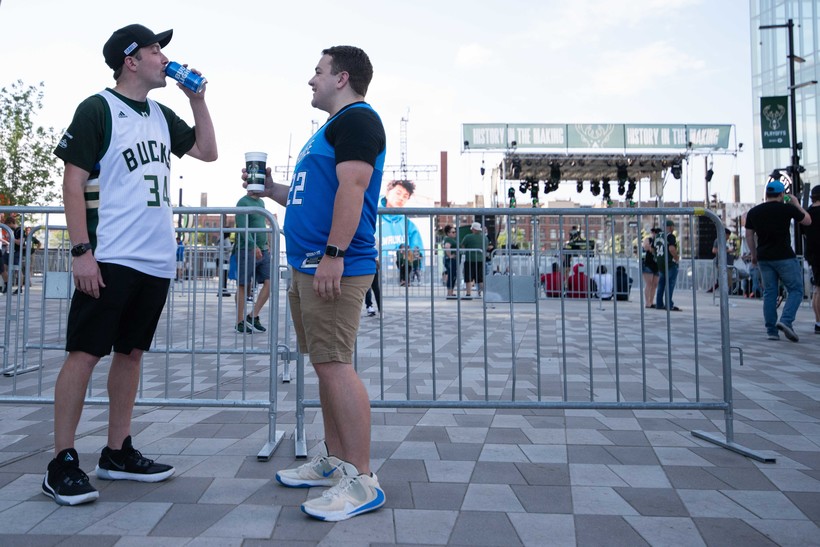 Brothers Patrick and Douglas Page stand outside the Fiserv Forum on Wednesday, June 23, 2021 in Milwaukee, Wis. The Milwaukee Bucks open their Eastern Conference finals series against the Atlanta Hawks on Wednesday night. With just four teams remaining, they’re considered the favorite to win an NBA title — their first since Kareem Abdul-Jabbar was a member of the team. The brothers drove up from Illinois, after buying tickets on StubHub. Angela Major/WPR

It seems unlikely the Hawks will get lucky there again.

Milwaukee’s top player is coming off the best playoff series of his career. On Saturday, Antetokounmpo played more than 50 minutes in Milwaukee’s overtime win, finishing the game with 40 points, 13 rebounds and five assists. He made 15 of 24 from the field — even sinking most of his free throws, an area where he’s struggled.

He dominated in the paint, scoring 30 points in Game 6. His teammate Khris Middleton put the Bucks over the top that night. His 38 points were a postseason career high.

Meanwhile, the Hawks are the first team to reach a conference final without an All Star on their roster since 1994. That’s not to say they don’t have great players and a coach, Nate McMillan, who brought new life to the team when he took over midseason.

The Bucks saw Hawks point guard Trae Young in just one game this regular season. He’s averaging 30 points in 38 minutes this postseason. At just 6-foot-1 and 180 pounds, he’s played effective defense too. The Hawks have a stable of strong shooters and some size with John Collins.

The Bucks will also see Bogdan Bogdanovic this series. The shooting guard almost ended up in Milwaukee last offseason, but the deal fell apart. It’s unclear how much of a difference he’ll make in this series as he’s dealing with a knee injury. 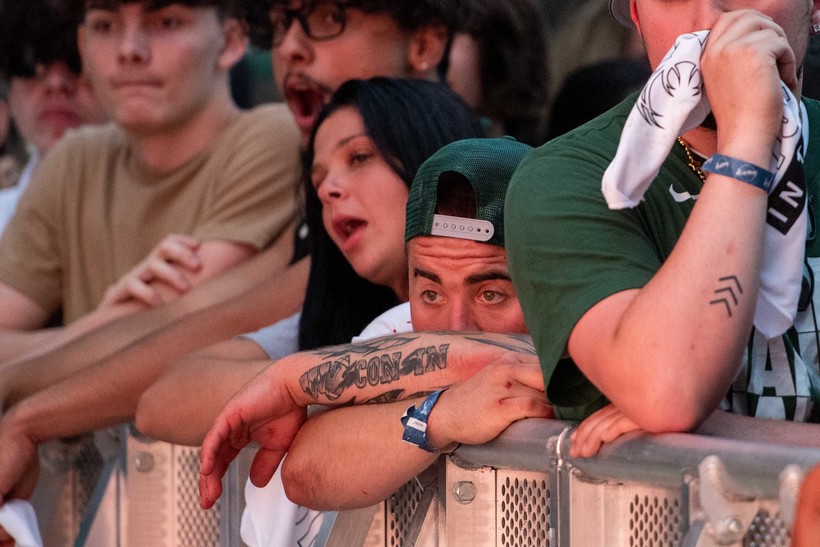 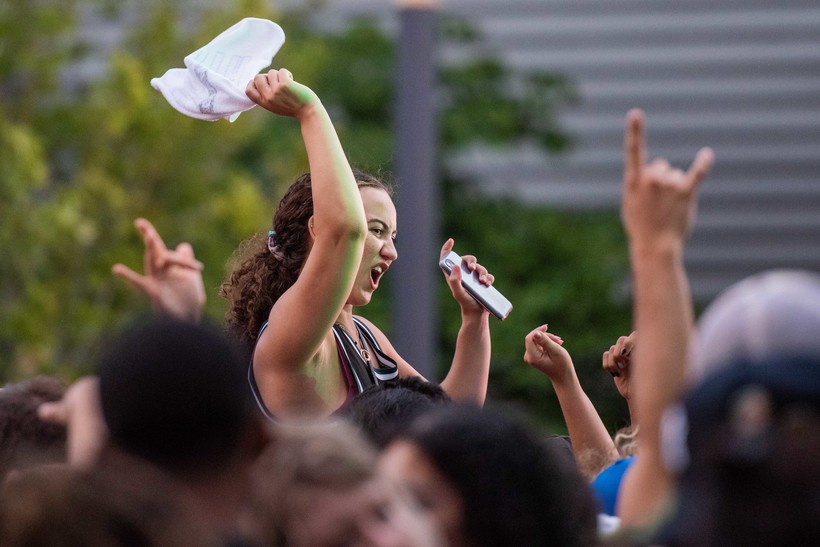 The Bucks last reached the conference finals in 2019, where they lost to the Toronto Raptors, who were led by superstar Kawhi Leonard. He and the Raptors went on to win a championship that year.

This time, Leonard’s team is one of two remaining in the Western Conference, but he’s sidelined with an injury, and there’s no indication on when or if he might return these playoffs. Plus, his Los Angeles Clippers are down two games to the Phoenix Suns.