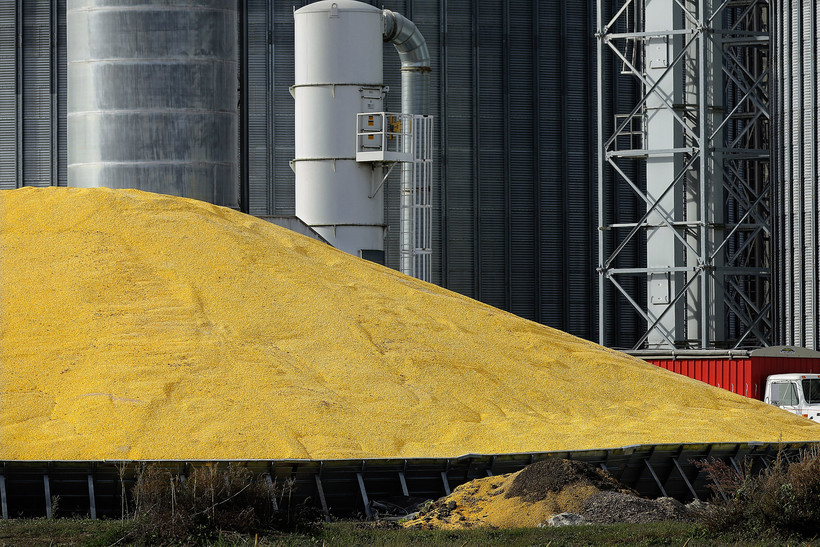 In this Thursday, Oct. 23, 2014 photo, as the silos fill up, harvested corn is piled outside the Archer Daniels Midland grain elevator in Niantic, Ill. Seth Perlman/AP Photo

Harvest Struggles Across Wisconsin Could Impact Supply Of Livestock Feed

While unfavorable weather is making the fall harvest difficult for many Wisconsin farmers, some agriculture experts worry the excess moisture will also impact stored livestock feed this winter.

Dairy farmers and other livestock owners often chop the entire corn plant in order to make silage. The plant material is compressed in a silo, bunker or other storage and allowed to ferment in order to preserve the feed.

Liz Binversie, agricultural educator for University of Wisconsin-Extension in Brown County, said she has heard farmers describe silage as like pickling vegetables.

"You're kind of pickling the feed, right? You're preserving it long term. And what's doing that is the microbial population," Binversie said.

She said farmers need conditions to be just right for the preservation process, especially the moisture level. Excess moisture within the plant or from rain could cause the silage to spoil or develop leachate, a kind of runoff that allows nutrients to seep out of the feed.

"When you're harvesting and trying to pack it in and then all of a sudden you have rain come (down) on your pile or on the crop in the field when you're trying to harvest it. …It's a really really tough year for farmers," Cooley said. "We had a really difficult fall last year and we're having as bad if not worse of one this year."

Cooley said farmers want to avoid having leachate develop in their silage because it could make the feed unusable or less nutritious for livestock.

The runoff can also be detrimental to surface water quality in the area.

State Department of Natural Resources officials recently found E. coli bacteria in a stream in Brown County after leachate from a nearby farm seeped under an earthen berm.

Brown County conservationist Mike Mushinski said the leak was partly a result of excess rain and high moisture content in the silage. He also pointed out the farm didn't have permanent infrastructure for managing leachate like a tank or lagoon, which is a requirement for many large farms in the state.

Binversie said some farms are also seeing too little moisture in their corn crop. With wet soil keeping machinery out of the fields, she said some farmers are worried about mature corn getting too dry.

Hitting the recommended moisture level is even more difficult this year given the planting delays many farmers experienced this spring.

"The earlier planted corn is becoming mature before the later planted corn, sometimes on the same farm. So trying to get all of that out of the ground while dodging different rain events has posed a huge challenge,” Binversie said.

She said not having a good harvest could drive some producers to sell off part of their herd or pay more for feed additives to make up for a low quality silage.