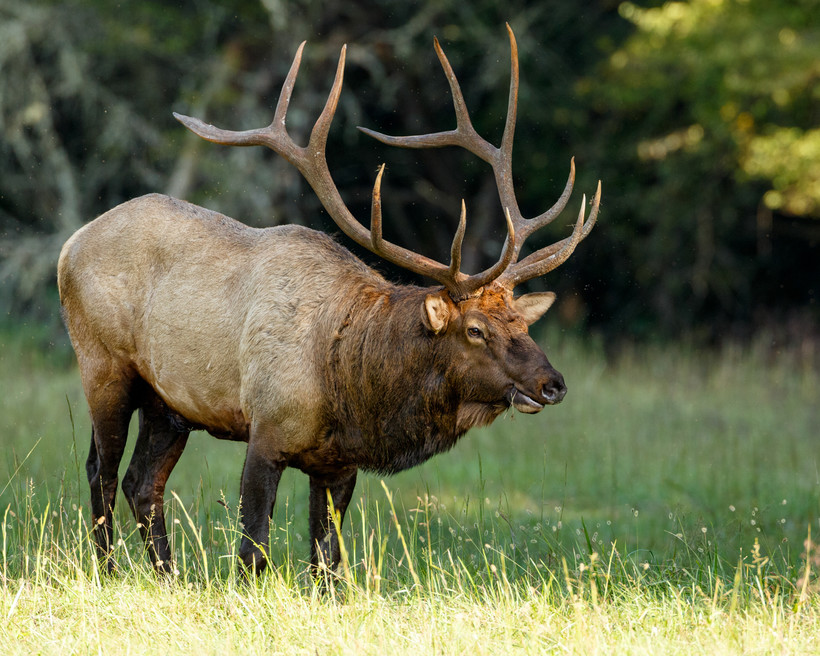 State and tribal hunters will be able to harvest eight elk from northern Wisconsin’s herd as part of the fifth-annual hunt set for this fall.

The Wisconsin Natural Resources Board unanimously approved the eight-elk quota at its meeting Wednesday. The decision maintains the elk quota set last year.

Wisconsin first approved a modern-day elk hunt in 2018 after the northern elk herd surpassed 200 elk for the first time since they were reintroduced to the Clam Lake area in 1995. While once widespread, the animal had been eliminated from the state since the 1880s.

The state Department of Natural Resources wants to grow the northern elk herd by at least 10 percent over a two-year period, maintain a minimum of 40 bulls for every 100 cows, or female elk, and increase the number of bulls over the next four years.

"At an eight-quota harvest, you can see that the estimated population in total, the total bull population, and mature bull cohort all continue to increase at a pretty decent size across that," Josh Spiegel, DNR wildlife biologist, said. "So that's going to continue to improve that whole herd status."

Since the elk hunt began, state and tribal hunters have harvested 31 elk. The eight-elk quota will be split equally with Wisconsin’s Ojibwe tribes and state-licensed hunters each receiving four tags.

For state-licensed hunters, one elk tag will be raffled off by the Rocky Mountain Elk Foundation. The remaining three tags will be drawn at random in June for state-licensed hunters. The DNR received more than 25,000 applications for a state-issued tag last year. The cost to apply for a tag is $10, and hunters can still apply until May 31. Winners of the drawing must pay a license fee of $49.

The board’s vice chair, Bill Bruins, questioned why the DNR's population estimates didn’t seem to account for the loss of calves. Spiegel noted the DNR has just begun a new study of calves that he hopes will give the agency a better understanding of their near and long-term survival.

The agency has been working with forestry officials and other landowners to improve habitat for the herd to help cows and their calves thrive. Calves need cover from trees to evade predators and habitat for foraging. Aspen is a primary food source for elk, and each year the agency works to provide diverse grasses and other forage for the herd. Spiegel noted prescribed burns have also been conducted to help promote vegetation for elk in northern Wisconsin.

The DNR has an overall goal to grow the northern herd to around 1,400 elk. For the central Wisconsin herd, the agency aims to grow the population to 390 elk with a goal of beginning discussions for an elk hunt there when the herd reaches 150 animals.

The board's secretary Bill Smith asked whether the state’s elk herds can sustain themselves without further introduction of elk from outside Wisconsin. The DNR reached an agreement with Kentucky in 2014 to import and release elk in Wisconsin. The agency ended those efforts in 2019.

Spiegel said they’re hoping to see whether calves from elk that were introduced from Kentucky will see increased survival.

The board’s chair Greg Kazmierski and board member Dr. Fred Prehn questioned whether the northern elk herd has reached its biological carrying capacity. Spiegel said they are seeing elk range farther out to areas where they historically haven’t been found.

"The landscape can support our elk," Spiegel said. "That's not a question. Our young animals are surviving."