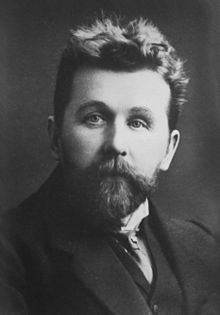 It was a brief and simple encounter but it made a big impression. In his 1952 autobiography, My Life, Alexander Gretchananoff looked back more than sixty years to his first meeting with his musical idol.

In the 1880s, when Gretchaninoff was a student at the Moscow Conservatory, the celebrated composer of the day was Peter Tchaikovsky. Each new Tchaikovsky symphony was included in the concerts of the Russian Imperial Musical Society. As soon as his songs were published, music lovers snapped them up. As a boy, Gretchaninoff was lucky enough to attend the first performances of Tchaikovsky's operas Eugene Onegin and The Queen of Spades.

For the Moscow symphony concerts, the orchestra was usually beefed up with conservatory students. Theory students were sometimes drafted to play the percussion instruments if the parts weren't too prominent. Gretchaninoff was excited and nervous when he was assigned the glockenspiel part in a performance of Tchaikovsky's orchestral suite Mozartiana. The prospect was all the more thrilling because the conductor was to be none other than Tchaikovsky himself.

Despite Gretchaninoff's nervousness, the practices went well. During the intermission in the last rehearsal Gretchaninoff was talking to a friend when he saw Tchaikovsky coming toward him. The friend introduced them. Tchaikovsky shook hands with Gretchaninoff and commented, "These parts should always be given to young musicians. Professional players never play them as conscientiously as these young performers do."

Long after receiving the compliment from his idol, Gretchaninoff was walking on air. His friends made fun of him by saying that for an entire week Alexander Gretchaninoff had not washed the hand that had touched Tchaikovsky.

Alexander Gretchaninoff’s career took him a long way from the Moscow Conservatory.  In 1939 he settled in the United States and became an American citizen. He lived to be ninety-two years old and was eighty-eight when his autobiography came out, but even then he remembered a few kind words and a handshake from Tchaikovsky.