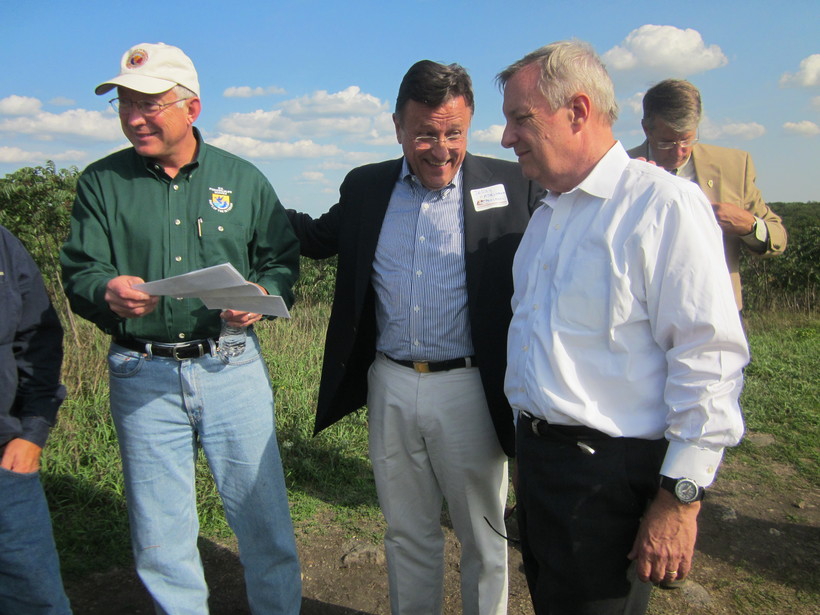 Hackmatack: An Attack on Ryan?

The Interior Department authorized a National Wildlife Refuge to be located in Walworth County, Wis. and Northeastern Ill. Many decisions about dollars have to be made before the refuge takes shape. Some of the decisions could be tied up in the race for vice-president and the battle for control of Congress.

There are still some farms and open space in the U.S. Highway 12 corridor between Chicago's northwest suburbs and Lake Geneva, Wis., but you can see Land for Sale signs everywhere. Citizens groups have been asking the federal government for about six years to fight urban sprawl and create the Hackmatack National Wildlife Refuge on both sides of the Wisconsin-Illinois border. Hackmatack is a Native American word for the tamarack tree, which is found in the region.

Denecke also believes wildlife would be better protected. So, Denecke was among those cheering at a park in McHenry County, Ill. when Interior Secretary Ken Salazar made this formal announcement, "That we have signed off on the final documents that will make this the 557th national wildlife refuge in the United States of America."

While Hackmatack supporters are excited, they are also worried about government budget battles. These struggles could slow the negotiation of conservation easements, land purchases and other preservation methods needed to link some already-protected property and private land into a 20,000-acre refuge.

To get a better view of what money could buy, Secretary Salazar and a small group of people climbed a mound at the McHenry county park and looked to the west. In the group was Illinois Democratic Senator Richard Durbin. Salazar used the moment to talk about the ongoing federal budget fight in Washington, and how House Republicans are trying to cut land and water conservation funds. He said, "What they've done is they've decimated LWCF [Land and Water Conservation Fund], so it doesn't exist anymore. The North American Wetlands Conservation Act is decimated as well. Most of the funding streams that would make this a reality are essentially taken away.'

The state of Illinois says it is willing to kick in about $5 million to help Hackmatack, and private conservation groups may shake the local money tree a bit. However, a larger federal commitment would help people like Sarah Schuster who owns an outdoors sports store in Lake Geneva. She says she would like to supply people heading to the new refuge, "You can't ignore opportunities like this in order to get people out and active, and take advantage of our urban youth and get them out here." About 12 million people from Chicago, Milwaukee and Madison are within an hour's drive of Hackmatack.

Margaret Lass-Gardiner of Lake Geneva and the Hackmatack friends group urges her U.S. representative to send a clear message of support for the refuge. Her representative is House Budget Committee Chair and vice-presidential candidate Paul Ryan.

Lass-Gardner said, "Economic no brainer, Paul Ryan. This is going to bring jobs for very, very little investment in infrastructure. You don't need to hire more police. It's nothing. You buy the land. You designate it as Hackmatack. People will come to see it. The tourism industry in the Lake Geneva region will blossom."

Ryan's congressional office says any comment from Ryan will have to come from the Mitt Romney campaign for president. The Romney-Ryan campaign office did not get back to us.