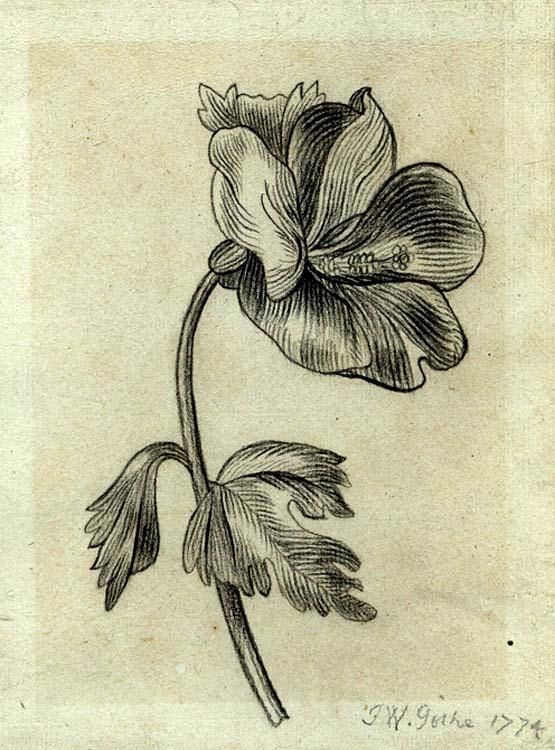 A flower sketch by Goethe.

At the age of twenty-one Felix Mendelssohn was already known as one of Europe’s finest composers, and he came from a family that moved in high social circles.  But young Mendelssohn was in awe and unsure of himself when he visited the 81-year-old literary giant, Johann Wolfgang von Goethe.  On May 25th, 1830, he wrote from Weimar to his family in Berlin:

“Goethe is so friendly and congenial with me that I don’t know how to thank him or how to be worthy of it.  This morning he made me play the piano for him for about an hour, pieces by all the great composers, in chronological order, and explain to him how they had crafted them, while he sat in a dark corner like the god Jupiter with his old eyes flashing lightning.

“He didn’t want me to play any Beethoven.  But I told him that I had to and so I played him the first movement of the C-Minor Symphony.  That had a strange effect on him.  At first he said, ‘that’s not the least bit moving.  It’s only amazing. It’s overblown.’  And then he went on growling to himself until after awhile he started again, saying, ‘that’s very great, quite mad.  It almost makes me afraid that the house will fall down.  And just imagine when they’re all playing at once!’

“As you know, I dine with him every day now.  He asks me very probing questions, and after the meal he’s so cheerful and talkative that we usually sit on in the room for more than an hour while he talks continuously.  It’s absolutely wonderful the way he brings me etchings, for example, and explains them or gives his opinions on literature or the theater or pretty girls.

“I inquired yesterday if I were really not coming too often.  But he growled that he had hardly begun to talk to me.”

Felix Mendelssohn describing conversations with the literary giant, Goethe, in a letter of May 25th, 1830.