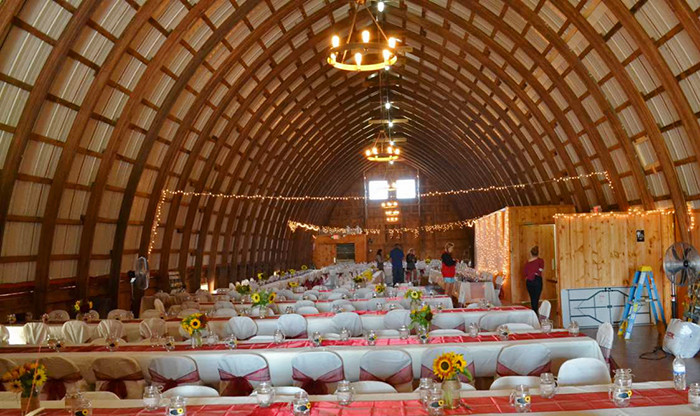 A bill has passed the Wisconsin Assembly that sets minimum safety standards for old barns that have been repurposed to hold weddings and other events.

But some local officials in rural parts of Wisconsin worry that the proposed new regulations don't go far enough.

The bill passed the Assembly on a voice vote Jan. 23. The companion bill, Senate Bill 137, is still in committee.

"It really came down to an issue of fairness, and we figured we would be better off and safer if we had a statewide approach that made all of the regulations and safety requirements across the board equal and similar," Tranel said.

The legislation has bipartisan support. State Rep. Katrina Shankland, D-Stevens Point, said she voted for it, but thought it could be improved.

"It seems like the law hasn't been keeping up with the growing trend toward agritourism, and I'm very supportive of agritourism," Shankland said. "I think it helps people in rural communities with economic development, but I do think we also need to balance those needs with safety."

On Jan. 25, Shankland attended a meeting of central Wisconsin county and town officials who are concerned about wedding barn safety, and what they perceive as loopholes in the new legislation. The meeting was held in a barn that has been repurposed for weddings on John Eron's rural Stevens Point farm. Eron is the president of the Portage County Farm Bureau and owner of Eron's Event Barn. Eron said he invested about $500,000 in his barn, and added safety features that go beyond the requirements of Tranel’s bill. They include back-up lights and an electrical generator, which he said proved invaluable during a power outage at a reception in early August.

"A semi hit a freight train in Stevens Point a little after 11 o’clock at night, and all of a sudden the power went out, everywhere in the barn. All the neighbors were completely dark," Eron said. "Instantly all the back-up emergency lighting kicked on. People were still going in and out of the bathrooms. The emergency back-up generator fired up soon after that."

Eron said back-up lighting and generators should be required by state law.

"I look at what would have happened," Eron said. "Everybody had some alcohol, and all of a sudden it's completely black in there. Somebody's going to trip down the stairs or worse yet, get trampled."

Eron invited Nancy Mistele, director of the Wisconsin Department of Administration's Office of Business Development, to listen to and comment on the concerns of local leaders.

Mistele told those in attendance that they needed to try to accommodate wedding barn owners whenever possible.

"If you're a town that simply says 'Ain't gonna happen here;' and if you do it, we're going to fine you $500 every time you do it, I've got people that just consider that a cost of doing business," Mistele said. "To simply stonewall and think the problems are going to go away, guess again."

The town and county leaders complained about too much noise in residential neighborhoods, parking on highways and safety concerns.

Barry Jacowski, chair of the Portage County Planning and Zoning Committee, said he supported agritourism, but worried about how quickly fire can spread in old barns.

"I would hate to have my friends or my family members go to something like a wedding or an anniversary that is supposed to be a very joyous occasion, and lose the whole family because the barn went up in flames," Jacowski said.

Leif Erickson, supervisor for the Town of Eau Pleine, said he worried that some old barns could collapse under the weight of hundreds of people dancing.

Erickson said some barn owners in the region are making money on weddings without getting permits or paying attention to safety concerns. He said when confronted by local officials, the barn owners claim that their events are private and only for friends and family.

"I would think the local tavern league, the local dance hall owners, the local businesses that pay taxes would be very upset," Erickson said. "There are a number of these event centers that make $40,000 to $70,000 a year and pay absolutely no tax. They're sticking it to the local people who do things by the code and that bothers me."

"Private property rights allow people to do things on their own property," she said. "And if individuals indicate that they're doing private events, I guess the real problem then becomes, whose responsibility is it to prove that it's not personal?"

Mistele told the town and county leaders that they had the ability to control wedding barns through temporary seasonal permits, which allow them to set conditions for the events.

But she said they needed to talk to the barn owners and try to reach an agreement with them.

"My advice is sit down, work with people and see what you can come up with, because two heads working together are probably going to come to solutions," she said.