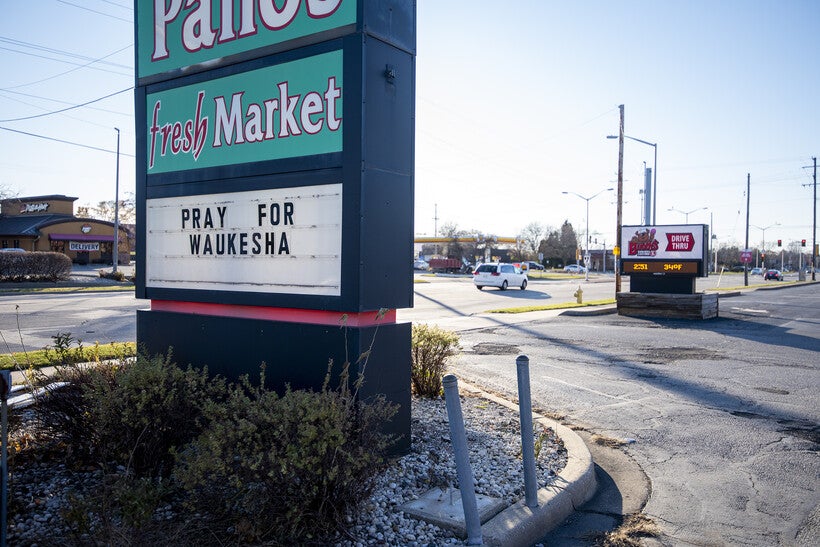 A sign outside of a local business acknowledges the Christmas parade tragedy Monday, Nov. 22, 2021, in Waukesha, Wis. Angela Major/WPR

Gov. Tony Evers has received a petition asking for the Milwaukee County's district attorney to be removed from office.

The call for action comes weeks after it was discovered that one of the office's prosecutors recommended a bail of $1,000 for a man who authorities say later drove his SUV through a Christmas parade in Waukesha last month, killing six people.

Darrell Brooks is being held on a $5 million bail for the six intentional homicide charges he faces stemming from the Nov. 21 parade deaths. Brooks is charged in the deaths of: Virginia Sorenson, 79; LeAnna Owen, 71; Tamara Durand, 52; Jane Kulich, 52; Wilhelm Hospel, 81; and Jackson Sparks, 8. He was released on bail just days before the parade after allegedly running over the mother of his child with his vehicle. On Monday, in a symbolic move, a Milwaukee judge raised the bail in that case from $1,000 to $200,000.

Milwaukee County District Attorney John Chisholm has been under fire since Brooks’ low bail was uncovered following the parade tragedy.

A group of people pledging they are Milwaukee taxpayers and led by longtime activist Orville Seymer filed the petition with Evers seeking Chisholm's removal. The petition cites other cases where Milwaukee County residents were free on bail and went on to commit further crimes.

"There are six people dead, including an 8-year-old boy, and none of this should have happened," Seymer said. "It would have been easily preventable if John Chisholm and his team would have requested a substantially higher bail."

Chisholm and Evers couldn't immediately be reached for comment. Both have said an internal investigation is taking place.

On Dec. 2, Chisholm addressed a Milwaukee County Board committee and told the group Brooks being free was a mistake. He said it was human error resulting from a young, overworked prosecutor.

Seymer has been involved in political activism for 20 years. He was part of Citizens for Responsible Government, which formed after the Milwaukee County pension scandal that included hundreds of county employees, including former Milwaukee County Executive Tom Ament, earning up to $900 million in annual payments.

When reached by phone Tuesday, Seymer said Evers is facing a tough reelection bid for governor, and Chisholm will be an albatross to him.

"Gov. Evers should think long and hard about this complaint that is front of him," Seymer said. "The election starts in earnest right after the first of the year. I don't think he wants the stain of John Chisholm hanging around his neck as he starts to run for reelection. This is such a big, big story, it’s not going to go away."

Meanwhile, state lawmakers approved a plan Tuesday that includes raises for all district attorneys except Milwaukee County's. In an 8-0 vote, members of the Joint Committee of Employee Relations voted that whoever holds office after the 2024 election in Milwaukee won't receive a pay increase because of the Brooks bail incident.

The increase was part of a compensation plan that includes a 2-percent pay increase for nearly all state employees.

Brooks' next court appearance for the Waukesha parade case is Jan. 14.