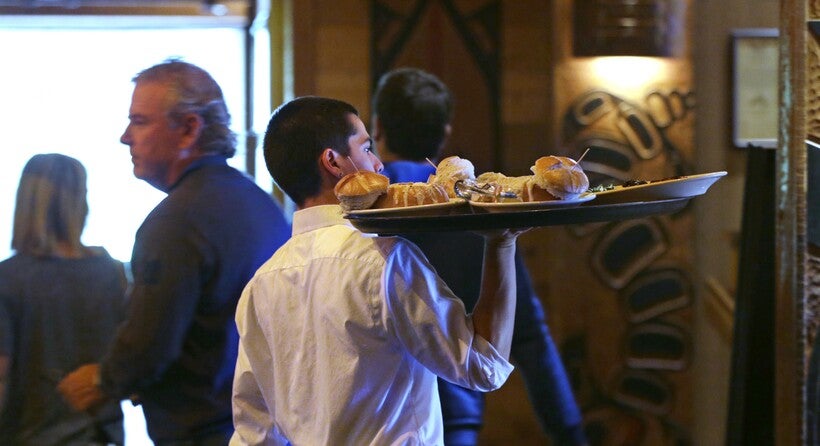 Server Zachary DeYoung carries a tray of food at an Ivar's restaurant in Seattle on Monday, July 27, 2015. Elaine Thompson/AP Photo

Proponents Of Eliminating Tipping Say It's More Equitable For Employees, Others Warn It Could Mean Less Income For Workers
By Rich Kremer
Share:

A group of restaurants, hotels and bars in Eau Claire have eliminated tipping and raised their minimum wage to $16 an hour. The ownership group overseeing the establishments says it's aimed at improving pay equity for all employees, something businesses and municipalities across the United States are attempting to do by raising the minimum wage.

The Pablo Group, which owns six bars, hotels and coffee shops in Eau Claire's downtown, announced in early June that employees working more than 20 hours per week would be paid a minimum hourly wage of $16 and tipping would no longer be expected for customers.

Wisconsin's hourly wage for tipped workers is $2.33 an hour, according to the U.S. Department of Labor.

"Every employee within Pablo Group is now making at least $16 per hour and those working more than 20 hours per week are offered benefits, including health care and a 401(k)," said an announcement on the company's website, which also mentioned pricing will be adjusted to accommodate for the higher wages.

Rita Dorsey is the director of experiences at the Pablo Group and oversees its hospitality businesses. She said wages were different at the various Pablo Group establishments prior to the change, which is aimed at creating wage stability for employees.

"You know that you're at least walking out the door with a certain amount of money that hopefully will help you budget for your bills and let you know what you can afford and can't afford to do," said Dorsey.

Dorsey said the Pablo Group is hopeful moving away from tips as a main driver of wages for servers and bartenders will make it easier for employees to push back against potential sexual harassment from customers without a fear of losing their tip.

She said since the Pablo Group has announced its new $16 an hour minimum wage, they've seen an increase in applicants amid state and national stories of a labor shortage. Dorsey said the move by hospitality businesses to increase wages while discouraging tipping is definitely a trend in the industry.

Todd Bucher is a founder and managing member of Delta Diner near Ashland, which eliminated tipping and increased wages to $15 an hour in June 2016. He said there's a long and troubled history of tipping in the U.S. Bucher said having a different pay structure for employees who work directly with customers than those who work in a kitchen is confusing when employees in smaller establishments often do both.

"But when you get right down to the brass tacks of it, it provides for an inequity and kind of a natural unfairness in terms of how compensation works within a restaurant," said Bucher.

Bucher said Delta Diner customers have been very generous over the years with estimated average tips between 20 and 25 percent. He said the move to $15 an hour wasn't to replace tips, but to adequately compensate employees and help move the business forward. Bucher said the change has been successful on many fronts and has helped Delta Diner avoid labor issues other restaurants are experiencing.

"So we retain core employees longer," said Bucher. "We have had very good success this year in terms of our seasonal staff."

Kristine Hillmer, president and CEO of the Wisconsin Restaurant Association, said while a number of restaurants in Wisconsin have raised wages and moved away from tipping, she wouldn't call it a trend. She said she's glad to see some restaurants trying the concept, but she hopes managers are including staff in the decision-making process.

Hillmer said that's important because there's a potential that some employees could make less getting a flat wage, even one well above federal minimum wage, rather than a $2.33 hourly wage with tips included.

"Depending upon your operation, of course, you would have to know what your compensation is if you go to a flat minimum wage without tips," said Hillmer. "That may actually be reducing company compensation for your staff."

Hillmer noted restaurant workers in states like Maine, Michigan, Washington, D.C., New Mexico and Maryland have pushed back against ballot initiatives to eliminate tipped wages and increase the minimum pay for service employees.

In January 2020, the Washington Post reported members of the Washington, D.C. City Council overturned a ballot initiative from 2018 that would have raised wages for tipped workers.

Hillmer argued against claims that tipping can make it harder for employees to push back against sexual harassment, saying harassment is never acceptable and it's the responsibility of management to address it. She also said allowing wages for servers and bartenders to be subsidized by customer tips allows owners to raise wages for back-of-the-house employees, such as kitchen workers.

In March, state Democratic lawmakers introduced legislation to increase the minimum wage for servers and bartenders to $7.25 from $2.33 an hour.

State Rep. Francesca Hong, D-Madison, is a co-sponsor of the bill and co-owner of Morris Ramen in Madison. She said the goal of the bill is to ensure that there aren't bad actors in the state's restaurant and bar industries exploiting vulnerable workers.

Hong said Morris Ramen has increased its wages to a base pay of $15 an hour and if tips come in, they're split among all employees.

"It's created a much more collaborative working environment," said Hong. "We have very little turnover. I'm incredibly proud to say that the majority of our workers at our restaurant have been with us since we opened, and it is the care of the workers that needs to be centered."

The minimum wage bill introduced by Hong and other Democrats was moved to a Republican-led committee and has yet to receive a public hearing. The Wisconsin Restaurant Association was neutral on the bill, while the Wisconsin Tavern League opposed it.