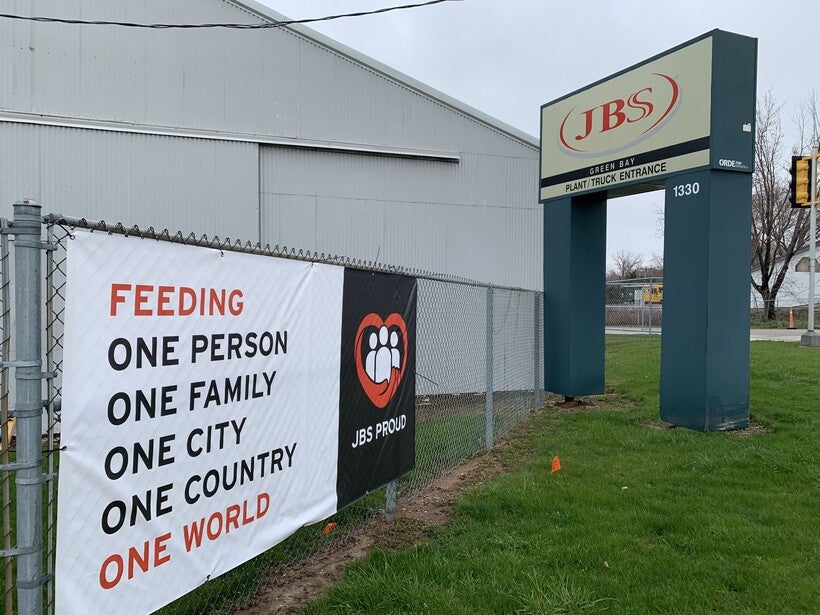 In this Wednesday, April 29, 2020 file photo the outside of the JBS Packerland meatpacking plant can be seen in Green Bay, Wis. Megan Hart/WPR

A national meatpacking company with a plant in Green Bay will pay a penalty of less than $15,000 in a settlement over a federal finding that unsafe practices early in the pandemic sickened and killed Wisconsin workers.

The settlement, announced late last week by the Occupational Health and Safety Administration, applies to seven of JBS Packerland's plants, including the Green Bay facility. In addition to the fine of $14,502, the company agreed to create an infectious disease preparedness plan.

OSHA hailed the settlement as a step toward protecting workers. At least one former employee of JBS Packerland says it amounts to little more than a slap on the wrist.

"This is not punishment for them," said Jarrett Brown, a Green Bay writer and labor activist who worked at the plant, leaving in early 2020. "This is not forcing them to do something they don't want to do. This is just an agreement to do something that should have been done a long time ago."

In a statement to WPR, JBS USA said it established an internal COVID-19 playbook in response to the pandemic and the company "welcome(s) this opportunity to strengthen our processes and plan to implement this important resource across our U.S. business." Its corporate website includes a lengthy timeline of how the company responded to the COVID-19 pandemic, highlighting the sometimes-contradictory messages from public officials on mask-wearing and other mitigation steps in early 2020.

The company closed its facility in Green Bay in late April 2020 after nearly 150 infections were linked to it. It reopened just over a week later.

In October 2020, OSHA issued a citation to the Green Bay JBS facility on the grounds that "the employer did not develop and implement timely and effective measures to mitigate the spread of (COVID-19)." The citation specifically cites employees forced to work in close proximity in April, months after OSHA issued guidance on physical distancing and after JBS's published timeline claims it implemented policies to facilitate distancing.

Early in the pandemic, meatpacking plants were the site of outbreaks even before the virus had spread widely across communities in Wisconsin and elsewhere. At the time, some people wrongly speculated that meatpacking work itself might be particularly susceptible to spreading the virus. In May 2020 arguments at the Wisconsin Supreme Court, then-Chief Justice Patience Roggensack said a virus outbreak in Brown County had been "due to the meatpacking" and that it "wasn't just the regular folks in Brown County" who had become infected.

Roggensack's comments were widely derided as dismissive of the health and safety of meatpacking workers. They were also factually incorrect, as shown by the spread of the disease through other workplaces over the next two years.

JBS USA was not the only meatpacking plant to see significant outbreaks and worker deaths in 2020. In a July 2020 investigation into working conditions in the industry, the Milwaukee Journal Sentinel reported that at least 1,527 Wisconsin workers at 83 meatpacking and food processing plants had been infected, and eight had died.

But JBS has shown it is willing to fight in court against claims that it bears responsibility for the disease's spread among its workers. It contested OSHA's initial citation, which would have fined the Green Bay facility alone about $14,000. A Reuters report in September 2020 found the company had denied compensation benefits to the families of workers in Greeley, Colorado who died from the disease, saying the deaths were not work-related. In April, the family of a pork-processing plant employee in Iowa sued the company, alleging negligence in its pandemic response.

The settlement with OSHA will require the company to create a "team of third-party multi-disciplinary experts and company representatives" to review JBS's health and safety practices, evaluate facilities policies and develop an infectious disease preparedness plan.