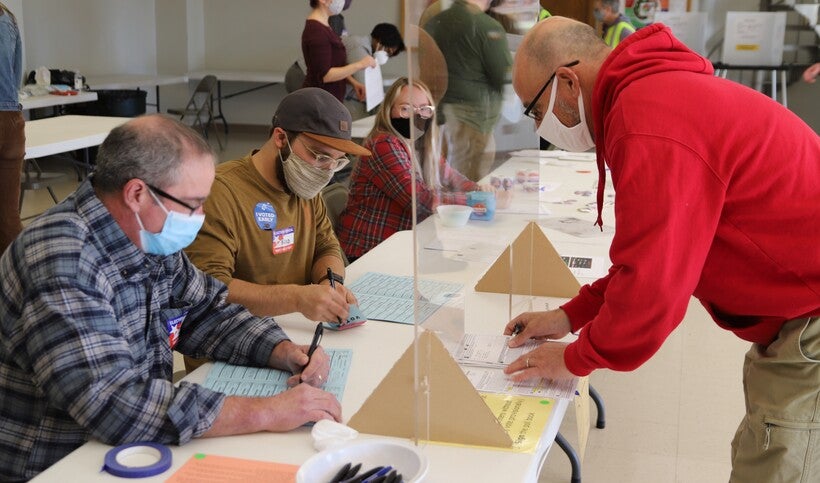 A voter turning in his absentee ballot at the Lakeview Lutheran Church on Madison's north side on Nov. 3, 2020. Steven Potter/WPR

The city attorney in Green Bay has released a detailed report defending how the city administered the 2020 presidential election, pushing back on claims from Republican lawmakers and activists and one former area election official.

Republicans have for months been raising questions about private grant funding used to help run the election in the city, as well as the role of a private consultant in Green Bay leading up to and on Election Day. The concerns were included in failed lawsuits in state and federal court and highlighted during recent invitation-only hearings of a state Assembly committee tasked with investigating the 2020 presidential election.

In the new report, Green Bay city attorney Vanessa Chavez wrote that the city’s election "has been the center of extensive misinformation and unfounded allegations."

Chavez went on to defend the use of the grant funding, which was provided by a group called the Center for Tech and Civic Life, an organization funded by Facebook CEO Mark Zuckerberg and his wife, Priscilla Chan.

In July, Wisconsin's five largest cities — Milwaukee, Madison, Green Bay, Kenosha and Racine — announced they would share $6.3 million in Center for Tech and Civic Life grant funding to help run the election during the pandemic. The group has said it awarded grants to a total of 221 counties, cities, towns and villages in Wisconsin as part of more than 2,500 election grants nationwide.

Chavez, who conducted more than 20 interviews with local officials and city employees for the report, said the funding was necessary to successfully administer the election.

"There was no way for the City to react to the changes brought on by the pandemic without the infusion of funding," she wrote.

According to the report, the grant funds were used to create and mail informational postcards to voters, to purchase cleaning supplies like hand sanitizer and disposable gloves, and to hire additional employees and poll workers. The money was also to buy absentee ballot drop boxes, security cameras, ballots scanners and ballot openers, the report read.

"As the Clerk’s Office had already exceeded its 2020 election budget after the April 2020 election, the funds paid for the costs of running elections the remainder of the year," Chavez wrote.

Republicans have raised concerns that the largest amounts of grant funding in 2020 were awarded to Democratic-leaning communities. They have introduced a bill that would bar the state and local governments from accepting grant funding for elections in the future. The plan has been approved by the state Senate, but hasn’t been voted on in the Assembly. It could be vetoed by Gov. Tony Evers.

On Thursday, former Brown County clerk Sandy Juno joined Erick Kaardal — the GOP attorney who brought the unsuccessful state and federal lawsuits about the grant funding — to announce they and several residents of Racine would file an official compliant with the Wisconsin Elections Commission about Racine’s acceptance of grant funds.

The head of the Wisconsin Elections Commission has previously pointed out no current law restricts the ability of communities to accept such grants.

Chavez’s report also focused on the role of one private consultant in Green Bay leading up to and on Election Day, Michael Spritzer-Rubenstein. Spritzer-Rubenstein, a former Democratic campaign operative, was the Wisconsin state lead for the nonprofit National Vote at Home Institute and was hired to provide consultation services for the city. Emails published by Wisconsin Spotlight, a website run by the conservative organization Empower Wisconsin, showed Green Bay city clerk Kris Teske raised concerns about the amount of influence Spritzer-Rubenstein had over some election-related decisions.

Chavez’s report notes that Spitzer-Rubenstein and Teske had differing opinions on things like room layout for in-person absentee voting and that, after involvement from the mayor’s office, Spitzer-Rubenstein’s suggestions were implemented over Teske’s objections.

"Then-Clerk Teske was hesitant to accept any of the recommendations from Mr. Spitzer-Rubenstein, advocating that the current set up was the best way for staff to conduct the election, based on her experience," the report read. "Nevertheless, her hesitations were overruled by the Mayor’s Office in favor of improving the public’s experience, and the recommendations regarding the layout were ultimately implemented to see if they would improve the process."

According to the report, shortly after Teske was overruled on another decision — moving the central counting location for absentee ballots — she took a leave of absence and did not work for the city in the final lead up to or on Election Day.

Chavez also wrote that some Election Day observers raised concerns about Spitzer-Rubenstein being present at the central count location and his offering support to poll workers, including directing them to an instructional manual if they had questions about procedure. After those concerns were relayed to the Wisconsin Elections Commission and local officials were notified, Spitzer-Rubenstein stopped doing those things, the report read.

"Notably, Mr. Spitzer-Rubenstein did not process any ballots and did not have access to the results of the election," the report reads.

Ultimately, Chavez's report points out no allegations of fraud have been made related to Green Bay's election administration and "no issues affecting the integrity of the election have been found."

The GOP co-chairs of the Legislature's audit committee have forwarded the information about Green Bay to Wisconsin's nonpartisan auditor general, who is already conducting a review of the 2020 election. Supporters of the audit say it will increase public confidence in election administration.