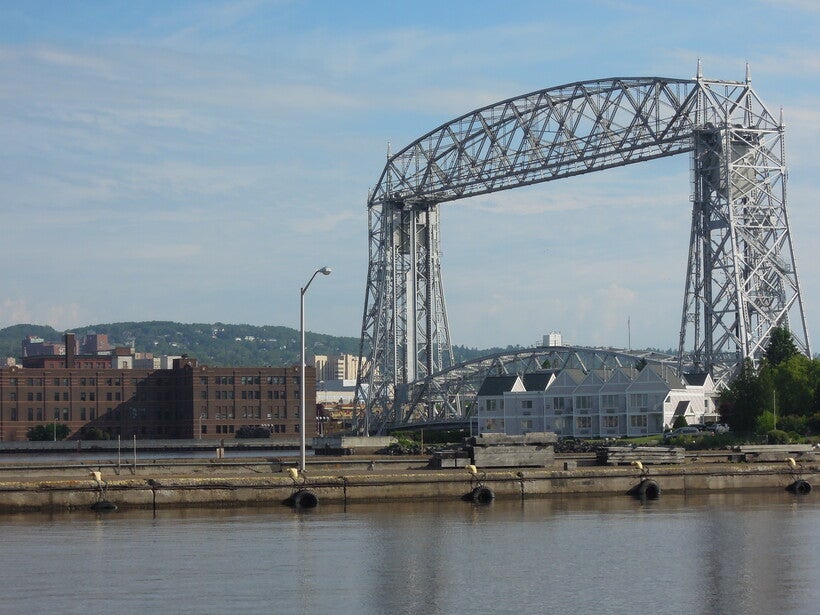 A view of the Duluth Aerial Lift Bridge.
Danielle Kaeding/WPR

A recent report finds around one-third of participating ports in the United States and Canada are keeping a detailed inventory of greenhouse gas emissions. Some Great Lakes ports are making strides to improve tracking of emissions, including Duluth and Milwaukee. The results are part of the Green Marine environmental certification program.

The voluntary program was formed in 2007 for the Great Lakes and St. Lawrence Seaway, according to West Coast program manager Eleanor Kirtley. The program has seen a 12-percent increase in the number of participants that include ship owners, shipyards and port authorities.

Kirtley said the program's overall mission is to advance environmental excellence among its 133 participants.

The participants conduct self-evaluations that are verified by a third party regarding their performance on efforts to reduce the risk of invasive species, greenhouse gas emissions, spills, waste and cargo losses. They rated their performance from levels 1 through 5. Lower levels represent monitoring of regulations and best practices and higher levels reflect the incorporation of new technologies and excellence in leadership.

The Duluth Seaway Port Authority, which manages facilities at the largest port on the Great Lakes, maintained a rating of level 4 or higher on areas like minimizing spills, cargo losses and environmental leadership. Jeff Stollenwerk, the port authority's government and environmental affairs director, said they’ll be improving in areas like waste management and greenhouse gas tracking.

"We’re evolving from a system that pretty much focused solely on carbon dioxide emissions," said Stollenwerk.

He said changes in criteria for emissions designed to improve environmental performance caused the port authority to dip from a level 5 to a level 3 last year. A level 4 indicates a detailed inventory of greenhouse gas emissions.

"The program really pushes us and challenges us to reduce our environmental footprint, and it's something that goes above and beyond regulation," said Stollenwerk. "It’s just about doing the right thing as a port."

He noted the level of activity and business conducted at the port plays a role in the variability of emissions each year. In the future, he said, they will track other forms of emissions in addition to carbon dioxide, such as methane and nitrous oxide.

Port Milwaukee, the program's only participating port in Wisconsin, has also been improving its environmental leadership and taking more inventory of emissions produced by their equipment and buildings over the last several years, according to Brian Kasprzyk, field engineer for Port Milwaukee. He said there’s always room to grow.

"We still need to do some work as far as documentation and some policies and actually getting it in writing," he said. "A lot of the stuff we communicate verbally with our tenants."

Port Milwaukee maintained a level 3 status on environmental leadership and greenhouse gas emissions, according to the report. Kasprzyk said the port’s self-evaluation showed it produced 77.9 metric tons of carbon dioxide in 2018 — a slight increase from the 77.2 metric tons produced in 2017. He noted the increased emissions may have been a result of a colder winter, higher staffing levels and increased activity with equipment at the port.

"We pride ourselves on being stewards of the environment," said Kasprzyk. "We do our best to, as a port authority, comply with all regulations and go above and beyond."

Port and Seaway participants showed the greatest improvement in 2018, according to the report. The report said results among ship owners on efforts to reduce the risk of aquatic invasive species indicate "greater feasibility of ballast water treatment systems within the marketplace." The findings showed seven of 18 ship owners were using a treatment system on one or more vessels.