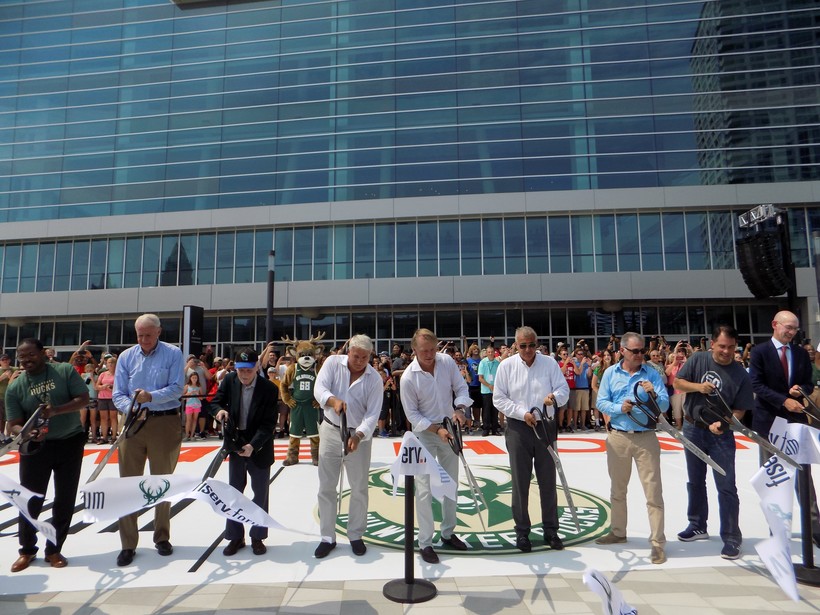 The Milwaukee Bucks have a brand-new home. The $524 million arena, called the Fiserv Forum, opened Sunday with thousands of people stopping by for an hours-long celebration and tour of the venue.

Bucks owner and former U.S. senator Herb Kohl was also at the grand opening and was widely credited by speakers for insuring the team stayed in Milwaukee and got a new arena.

Milwaukee Common Council President Ashanti Hamilton credited Kohl and the Bucks organization for their efforts to ensure the surrounding community reaped the benefits of the facility.

"There were town halls all across the city of Milwaukee and every neighborhood, especially those, especially those that had high unemployment rates to try to connect the people who were living in those neighborhoods to the job opportunities that presented themselves by the commitment that the state made to building Fiserv Forum," Hamilton said.

Supporters of the project also touted adjacent development they expect the project will spur.

But in the years that it took to get the project off the ground, the new arena has been subject of criticisms, ranging from complaints about its brown roof and curved design to the fact it will cost taxpayers $250 million.

Walker said he thinks the plan will pay off for taxpayers.

"We worked on the deal for every dollar the state invests in making this happen, you get a return of almost $3, three-to-one return over the next 20 years," Walker said. "That's a pretty good deal and a pretty good model, commissioner, for other arenas across the nation."

Most recently, the arena's naming rights have been a point of controversy.

Last fall, Brookfield-based, financial services company Fiserv, Inc. qualified for up to $12.5 million in state subsidies in exchange for keeping its headquarters in Wisconsin. Some lawmakers have been critical of Fiserv’s eligibility for taxpayer dollars while its name is attached to the new arena.

Still, some Wisconsin residents remain split on whether the Fiserv Forum was a good use of taxpayer funds.

Lane Sha and her husband, Daniel Rojas, both live in Milwaukee and take opposing views.

"My whole thing was we don't want our downtown to end up like a Detroit or a St. Louis, where you have to go to the outskirts," Sha said. "I was all for bringing businesses back downtown because we don't want it isolated from all the other things."

Rojas said while he understands how the stadium can be positive, he hopes government can find ways to invest in the area without investing in already wealthy franchises.

"I was kind of disappointed that they can do this for a stadium but they won't do it for educational purposes or the community," Rojas said.