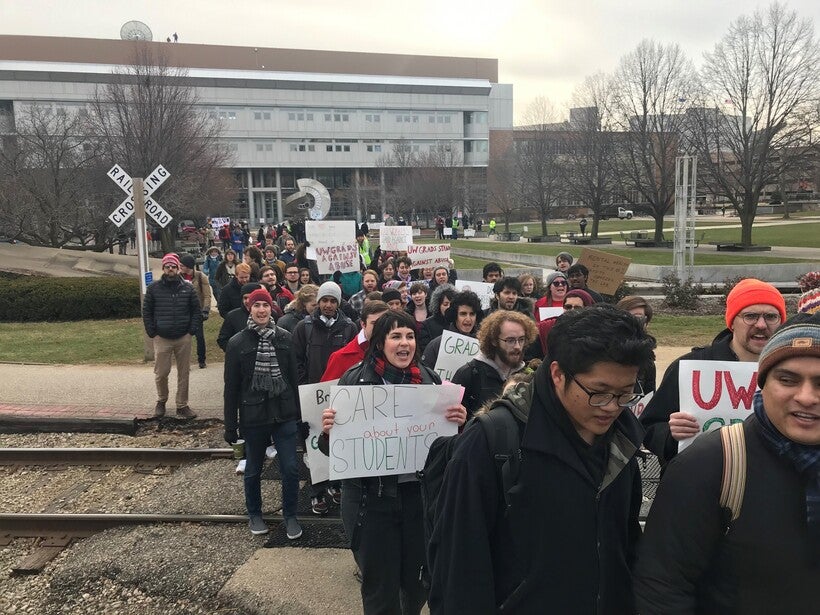 Protestors march during a rally calling for the University of Wisconsin-Madison to fire Professor Akbar Sayeed, who reportedly created a toxic, abusive work environment in his lab. Miranda Suarez/WPR

Graduate students at the University of Wisconsin-Madison are demanding the university fire a professor who reportedly created a toxic work environment in his lab.

Over 100 students gathered in front of Engineering Hall for a rally on Thursday afternoon. The protest centered on revelations from a Wisconsin State Journal investigation in October about the abusive work environment that engineering professor Akbar Sayeed created in his lab — and the 2016 suicide of John Brady, one of his research assistants.

The university confirmed that it disciplined Sayeed for violating "university policy on hostile and intimidating behavior." In fact, Sayeed was suspended for two years following Brady’s death, according to a message from the dean of the College of Engineering.

Although Sayeed can return in January, he will not teach, but perform "administrative duties," the dean’s message states.

A petition to fire Sayeed and open a new investigation into his conduct — sponsored by Teaching Assistants' Association, the graduate student workers’ union, and the Electrical and Computer Engineering (ECE) Graduate Student Association — has collected over 2,000 signatures.

At the protest, the groups called for the university to protect its students.

"We will not sit idly by as abusers maintain greater protections on this campus than the victims that endure their behavior," said Aaron Day, president of the ECE Graduate Student Association.

The overwhelming message of the protest: Fire Sayeed. Taylor Draheim, a sophomore studying electrical engineering, said there is no home for him at UW.

"It kinda blew my mind that something like that could just go so under the radar with the university, and that they're kinda just scraping it under the rug and just letting him come back," she said.

Danny Parker, a Ph.D. student in UW-Madison's School of Journalism and Mass Communication, said letting Sayeed come back will set a bad example for other departments. 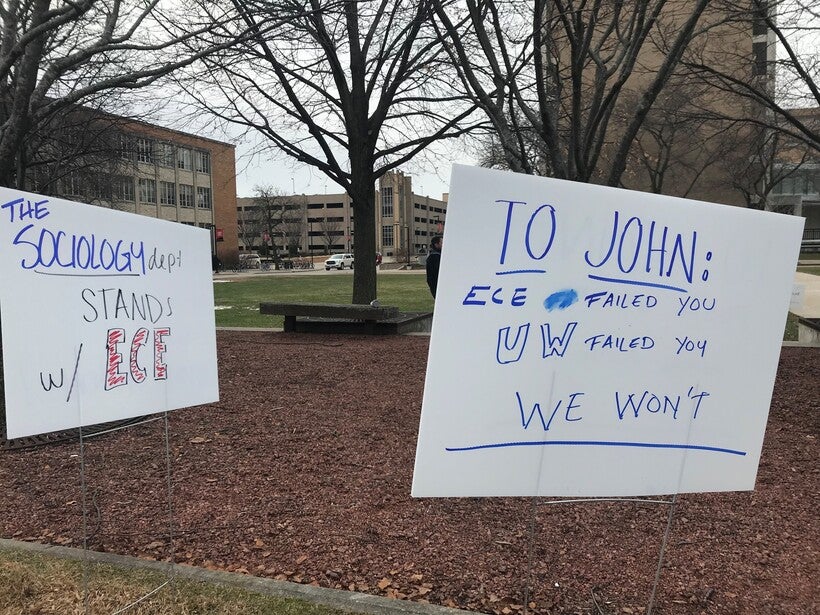 Protestors at the University of Wisconsin-Madison wrote signs in solidarity with Electrical and Computer Engineering (ECE) graduate students. The sign on the right is a message to John Brady, who died by suicide in 2016 after working in a reportedly abusive lab environment under Professor Akbar Sayeed. Miranda Suarez/WPR

Ralliers marched across campus to deliver their petition to Provost John Karl Scholz, but once they reached Bascom Hall, another person took it and gave assurances it would reach him.

Kyle Daruwalla, the vice president of the ECE Graduate Student Association, said the person told him Scholz was at a UW Board of Regents meeting in Whitewater.

Following the Wisconsin State Journal report, Scholz and Chancellor Rebecca Blank came out with ways the university plans to address hostile work environments and intimidating behavior, including better communication of campus policies prohibiting such behavior and creating a centralized system for reporting it.

"Going forward, we call upon each member of the campus community to be a partner in identifying, addressing and confronting incidents of hostile and intimidating behavior," Scholz and Blank wrote in their statement. "For too long in academia, these types of interactions have existed in the shadows or been discounted as ‘just the way it is.'"