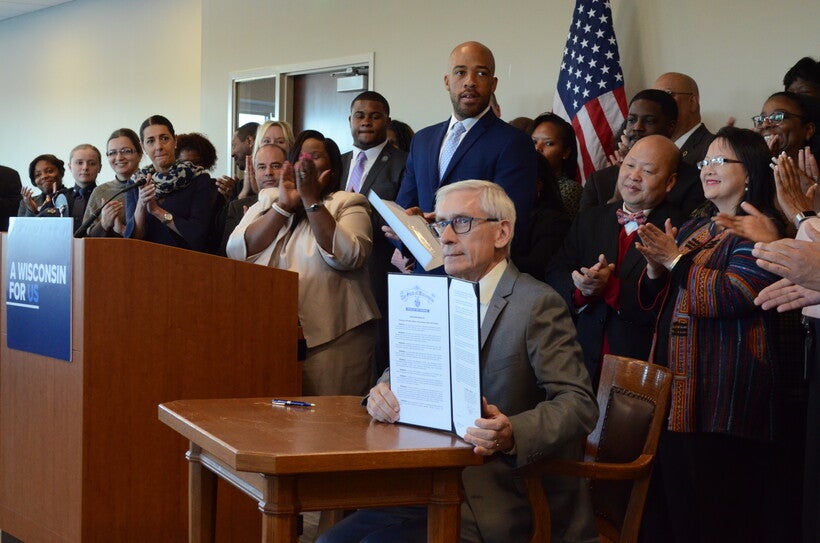 Gov. Tony Evers holds up his fresh signature on an executive order to combat discrimination while at a press conference in Madison on Nov. 12, 2019. Miranda Suarez/WPR

The governor’s office and its allies in the state Legislature are teaming up to combat discrimination in Wisconsin, where racial disparities are stark.

Gov. Tony Evers signed the executive order on Tuesday, creating the Governor’s Advisory Council on Equity and Inclusion — a group of appointees who will advise the executive branch on ways to promote equality in Wisconsin.

All state agency employees, including the governor, will have to undergo mandatory training in cultural sensitivity and systemic racism. The order also sets the stage to reform state agencies, requiring them to set equity goals and review their workplace policies.

Evers said the executive order is meant to reflect the ways in which the state has changed since he grew up in small-town Wisconsin.

"Ninety-nine-point-nine percent of the people that lived in that town looked exactly like me," he said Tuesday.

According to Census Bureau estimates, Wisconsin's population is 87 percent white.

Rep. Shelia Stubbs, D-Madison, shared damning statistics about the deep racial inequality in the state. She pointed to the poverty rate for black Wisconsinites, which is three to four times higher than it is for white people.

She also referenced a study that found that black infants born in Wisconsin die before their first birthday at a higher rate than any other state.

Assembly Speaker Robin Vos, R-Rochester, said the effort seems like a repeat of Evers' first executive order, which aimed to prohibit and prevent discrimination in state government. Even so, he said he supports the idea of promoting equality in state agencies.

"It should be under every single governor, so that people who are qualified for the job have the ability to get it," he said.

After Evers signed the new executive order, Stubbs and Sen. Lena Taylor, D-Milwaukee, announced a complementary bill in the state Legislature. It would establish a statewide inclusion plan, to be updated and enforced each year.

"We’re the worst in the nation as a place to raise a black child, to be a black American," Taylor said. "We need this more than, I think, anything."

Taylor emphasized the executive order and the bill alone aren't reasons to celebrate, but necessary steps to changing discriminatory policies and improving equity.

"That is when the real applause should happen," she said.