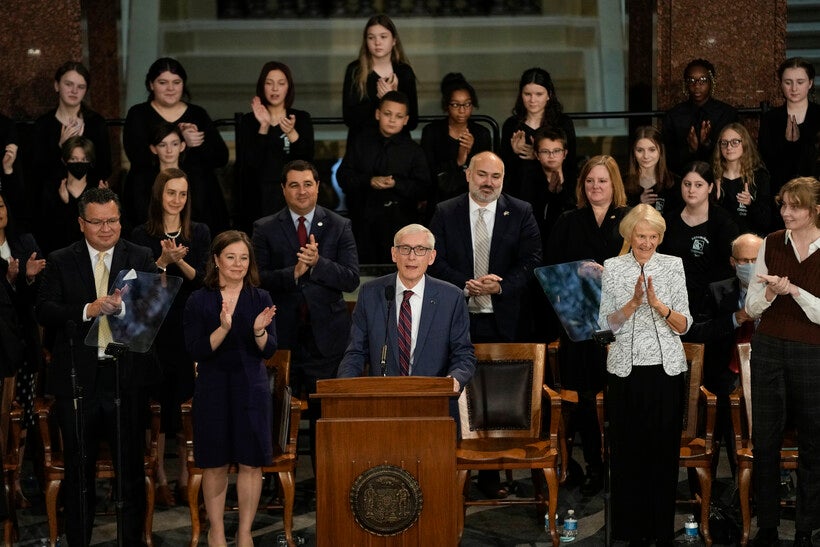 Governor asks Democrats, Republicans to work together on issues that have long divided them
By WPR Staff
Updated:
Tuesday, January 3, 2023, 5:30pm
Share:

Democratic Gov. Tony Evers used his second inaugural address to call on policymakers to work together on a list of priorities that eluded him in his first term, including a repeal of Wisconsin's pre-Civil War abortion ban.

But despite the celebratory atmosphere of Inauguration Day, Evers faces many of the same political realities today as he did four years ago, with Republicans holding big majorities in both the Assembly and the Senate.

While that dynamic is likely to thwart many of the governor's priorities in his second term, Evers laid out an ambitious agenda Tuesday after he was sworn in again as the 46th governor of Wisconsin. Evers called for expanding Medicaid and further funding K-12 schools, among other priorities.

"Our state and our country’s histories are punctuated by moments just like this one — moments where we have the chance to do the right thing — not for ourselves, but for each other," Evers said Tuesday in the rotunda of the state Capitol.

"There’s no question that the work we must do to build the future we want for our kids, our grandkids, and our state is only possible if we’re willing to do it together, and I believe that together we will," he continued.

The governor devoted part of his speech to extending protections for abortion access. He emphasized the importance of restoring freedoms that were available to Wisconsin residents before the U.S. Supreme Court overturned Roe. v. Wade in June. That decision immediately put into effect the state's abortion ban, making nearly all abortions illegal.

"People voted because … it’s 2023, and they believe we shouldn’t be beholden to a law from the 1800s passed well before women had the right to vote," Evers said. "Because they believe people should have the freedom to make their own reproductive health decisions without needing permission from politicians."

Evers also pointed to the economic implications of the state's abortion ban.

"If we want to make sure we can compete for talented workers and businesses against other states, then we ought to start by making sure that when workers and businesses look to relocate to Wisconsin," he said. "Part of that calculus doesn’t include themselves, their loved ones, or their workers being stripped of their reproductive freedom just for moving here."

Evers tried unsuccessfully to expand Medicaid in Wisconsin during his first term, but that didn't stop him from mentioning it during his inaugural address. He said he'd like to see BadgerCare, and access to affordable health care expanded.

Another point of emphasis was protecting the state's water resources, including harmful chemicals such as PFAS, lead and nitrates in drinking water.

"We must ensure that every Wisconsinite has access to clean, safe water — no matter whether it’s for drinking in our homes and schools, for our crops or livestock, or our natural waters for hunting, fishing, and outdoor recreation," he said.

While the governor didn't make mention of it in his address, one of the defining features of Evers' second term could be how he and the Legislature decide to handle a record budget surplus that's currently projected at $6.6 billion. Much of that discussion could revolve around what portion of the funding goes toward tax cuts and what portion goes toward education, a top Evers priority. 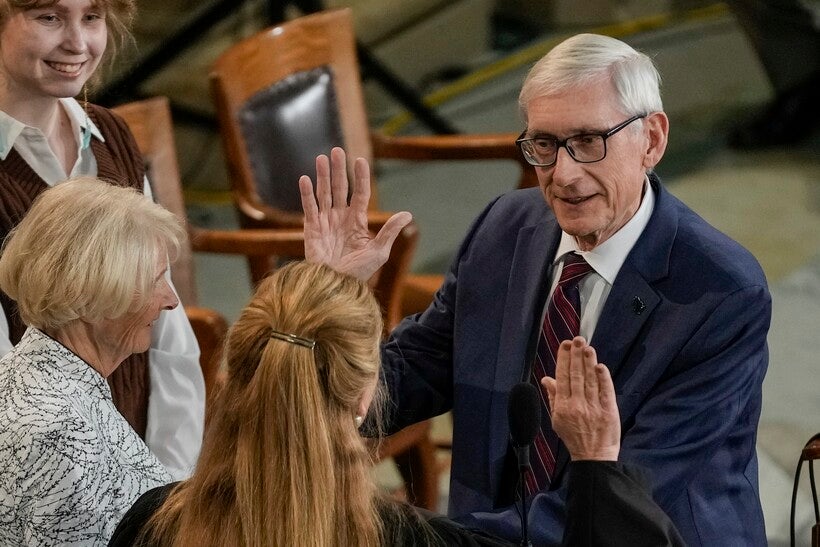 Wisconsin Gov. Tony Evers is sworn in during an inauguration ceremony at the Wisconsin State Capitol in Madison, Wis., on Tuesday, Jan. 3, 2023. Morry Gash/AP Photo

This year’s inauguration had a personal touch. Evers’ granddaughter, Tessa Schoenecker, introduced her grandfather before he was sworn in.

Schoenecker brought a sense of humor to the day, and made her grandfather smile.

"I'd like to especially thank Tony Evers and his team for allowing me to introduce him today and confirming my suspicions that I’m his favorite grandchild," Schoenecker said.

"I'm so proud that this candidate was my grandfather. Not to mention extremely relieved because I was scared I'd lose my D-list celebrity status if we lost," she later said with a grin and to laughter from the crowd.

On a more serious note, the college student impressed upon the importance of voting. The November election was the first time she could vote for Evers.

"This year was my first being able to vote for him, and it was so meaningful seeing his name on the ballot," Schoenecker said. "...The name on the ballot is the guy who wears his Wisconsin State Fair cream puffs hat too much and gets really into family pickleball tournaments."

She said her grandfather’s role in politics has shined a light on the importance of being active in democracy and standing up for what you believe in.

"We saw this so clearly in this past election with incredibly high youth voter turnout across the state. Young people in Wisconsin — or like myself, voting absentee from college — knew that we could be a decisive factor and knew that we had to show up," she said.

Marquette University political science professor Amber Wichowsky told PBS Wisconsin that the youth vote was key to Evers’ reelection, and the issues that drove them to the polls were reproductive health care and climate change.

Nationally, youth voter turnout was the second-highest in the last three decades, according to an estimate from Tufts University’s Center for Information and Research on Civic Learning and Engagement, or CIRCLE.

About 27 percent of voters between the ages of 18 and 29 voted in the November midterm elections nationally, according to CIRCLE. Turnout was even higher in some states with tight races, including Wisconsin.

According to CIRCLE, young voters gave Evers "extraordinary support" with 70 percent of the vote versus 28 percent for Republican challenger Tim Michels. 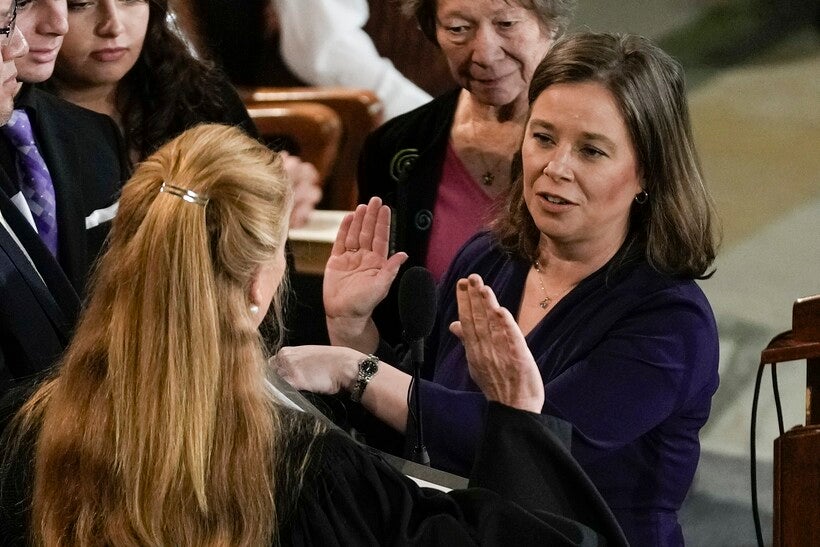 Rodriguez previously represented Waukesha County and the western suburbs of Milwaukee when she served in the state Assembly.

She received loud applause when she emphasized the importance of affordable child care, paid family leave and access to abortions.

Rodriquez said being a mom, public health professional, life-long Wisconsinite and politician has taught her many things, including one thing in particular: "We aren’t all that different."

"Wisconsinites are strong, resilient, and ready for the bold, urgent solutions Gov. Evers and I have been fighting for to address the challenges we face — solutions that won't change who we are as a state, but instead ensure our state can be all we’ve set out to be," she continued.

Like Evers, she called on Republicans and Democrats to cross the aisle and come together to serve Wisconsin.

"There isn’t a one-size-fits-all solution to our challenges," Rodriguez said. "It’s going to take all of us working together, bringing our ideas to the table, and connecting the dots to build the sort of future we want for our state."

Also being sworn into his first term Tuesday was Republican John Leiber, Wisconsin's new state treasurer. Leiber was the only Republican elected to Wisconsin's constitutional offices in November.

"We aren't going to agree on everything, naturally, but that's the way it's supposed to be," Leiber said in prepared remarks. "We'll need to work together in this divided government to accomplish something, and I look forward to getting things done." 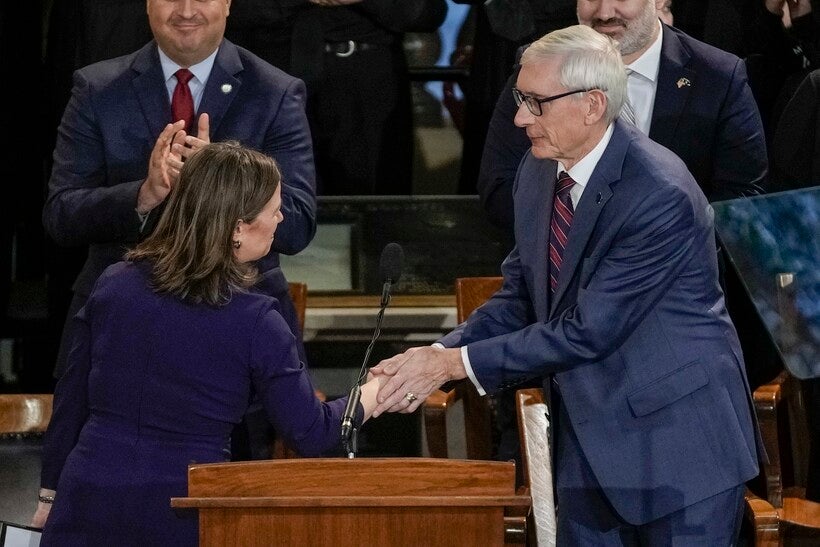 Legislature sworn in with even bigger GOP majorities

In the state Legislature, Republican Assembly Speaker Robin Vos, R-Rochester, and Senate Majority Leader Devin LeMahieu, R - Oostburg, were both sworn in to lead their chambers for the second consecutive session. Like Evers, both lawmakers made calls for bipartisanship, but on decidedly different issues.

Vos, who is the longest-serving speaker in the history of the Wisconsin Assembly, said among his top priorities is addressing the learning loss that occurred in schools during the COVID-19 pandemic. He also called for passing tax cuts to encourage residents to stay here rather than move to another state where the tax burden is lower.

"Having a discussion about our tax burden can help with our demographic challenges," Vos said. "We can't fix the weather. But we can work together to fix our tax climate, to keep people wanting to live in Wisconsin and not live somewhere else."

LeMahieu also highlighted tax cuts as an area where Republicans and Democrats could work together, noting the income tax cut Evers approved as part of the last state budget.

"Last session, we passed a budget that was supported by both sides of the aisle and was signed by our governor," LeMahieu said. "Let's work towards that again."

One area where Evers and Republicans could potentially work together is on a restructuring of the state's shared revenue program for local governments. Evers' speech alluded to "generational, transformational improvements" to how the state invests in local communities. LeMahieu referenced the inflationary pressures being felt by local governments.

"Fortunately, we've set ourselves up with resources to address these needs," LeMahieu said. "We look forward to working with the governor and the assembly to find solutions."