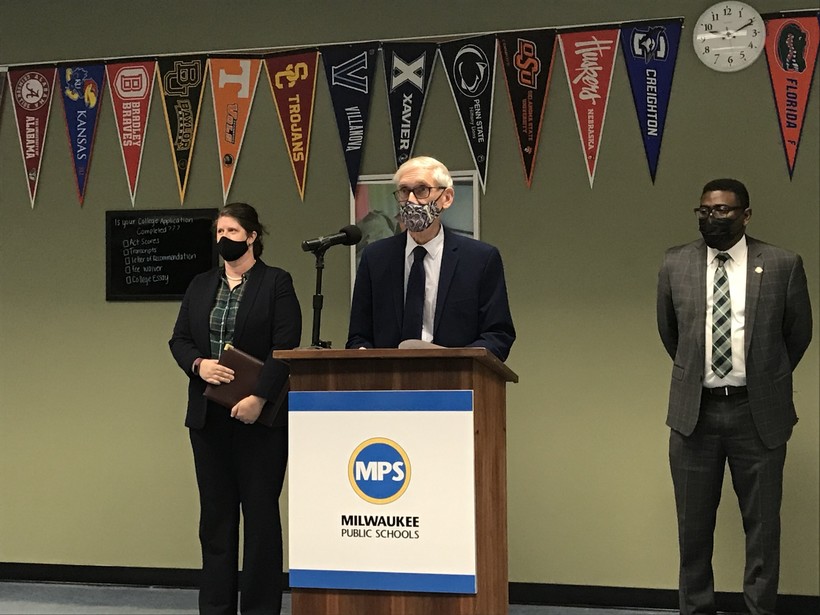 One-time funds amount to about $133 per pupil
By Madeline Fox
Share:

Schools across Wisconsin will receive an additional $110 million in one-time funds over the next several years, Gov. Tony Evers announced Thursday.

Evers promised $100 million for schools when he signed the biennial budget earlier this year. The budget did not raise schools' revenue limits — the amount of money districts can take in from a combination of property taxes and state aid — and was criticized by public education advocates as not meeting schools' needs, especially in underfunded areas like bilingual and bicultural aid.

"While these funds won't make our schools whole on their own, they will go a long way toward helping to ensure our kids get the services and resources they need to rebound and recover," Evers said.

Milwaukee Public Schools will receive about $9.6 million of the new funds. A full list of the amount allocated to each school can be found here.

Milwaukee Schools superintendent Keith Posley said the money will go to a variety of needs, ranging from contact tracers and tutors to professional development for teachers and new paint for classrooms in disrepair.

"Yesterday, I looked at a dossier of information around some things that schools need, $465 million dollars that I had of asks for schools," he said. "There's an opportunity to fill some of those voids."

Like federal coronavirus relief funds, which will pump more than $3 billion into Wisconsin schools, these funds are a one-time distribution, rather than a long-term funding source schools can rely on moving forward. Schools are typically hesitant to use one-time funds for staff salaries — generally a district's largest single expense — because when the funds run out, they have to find a new way to keep paying those salaries.

Posley said some staff Milwaukee schools could hire with the new funds might not need to stay on after the funding runs out, as schools will hopefully need fewer contact tracers, for example. For the jobs Milwaukee schools want to keep in place, he said they'll look for more funding.

"We'll be looking at various ways of how we can solicit additional funding through grant dollars and those kinds of things to keep staff on after this funding is gone," Posley said. "We are looking at how we can maintain the staff we have as well as increase — as long as there are student needs, we will go to the extreme to make sure that we meet those student needs."

State Superintendent Jill Underly said the $110 million is only a stopgap, making up for what she said was the Legislature's shortfall in adequately funding schools.

"That'll get us through the next couple years," she said. "It's not nearly enough to meet all the needs that our school districts have for operational expenses, but it's a Band-Aid that they can use in the most flexible way possible."