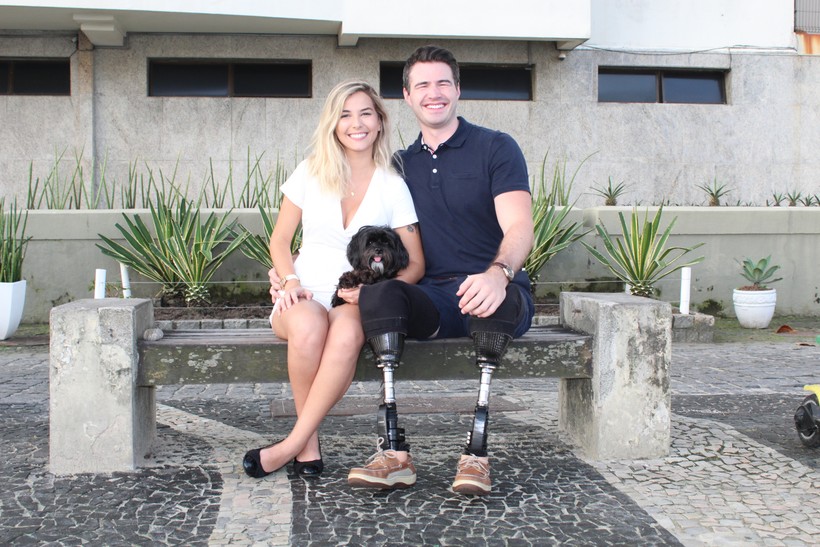 Jason Church, right, a retired Army captain who lost his legs in an explosion in Afghanistan, announced he will run for Congress. He is pictured here with his fiancee, Bella Barbosa, left. Photo courtesy of Church for Wisconsin

Army veteran Jason Church announced his candidacy Tuesday, a day after Duffy resigned his seat. Church joins fellow Republican, state Sen. Tom Tiffany of Minocqua, as the only announced candidates in the race. Numerous others, including many Democrats, are mulling a run for the 7th Congressional District seat.

In a video announcing his candidacy, Church talked about his service in Afghanistan and pledged to serve a maximum of four terms in Congress if elected.

The 30-year-old Church lives in Hudson. He deployed to Afghanistan in 2012, and the same year lost both of his legs following a bomb explosion.

Church, who most recently worked as an outreach staffer for Republican U.S. Sen. Ron Johnson, cast himself as both an ally of President Donald Trump and a political outsider who wouldn't engage in the corrupt deal-making of Washington.

"President Trump is making tough decisions," he said in the video. "He's trying to secure our borders. He's trying to create jobs. But he needs help. He needs people who come from outside politics — people who don't owe anything to anyone. People who just want to do things right."

The primary will be Monday, Dec. 30 with a general election Monday, Jan. 27. Gov. Tony Evers, a Democrat, announced the timing for the special election on Monday amid Republican criticism, especially around the primary date that falls between Christmas and New Year's holidays.

Church retired from the Army in 2014. He earned his law degree from the University of Wisconsin, and worked for Johnson for about six years.

Jim Miller, the Republican Party chairman of the 7th Congressional District, said he considers both Church and Tiffany "top-shelf candidates."

"Primaries allow the candidates to get out there and work hard and hone their message," Miller said. "It'll be an interesting primary."

No Democrat has yet announced a run for the seat. The district is considered Republican territory, but as recently as 2011 was held by Democratic Rep. Dave Obey, who served in Congress for more than 40 years.

The Church campaign did not immediately respond to an interview request.

Editor's note: this story has been updated with original reporting from WPR.