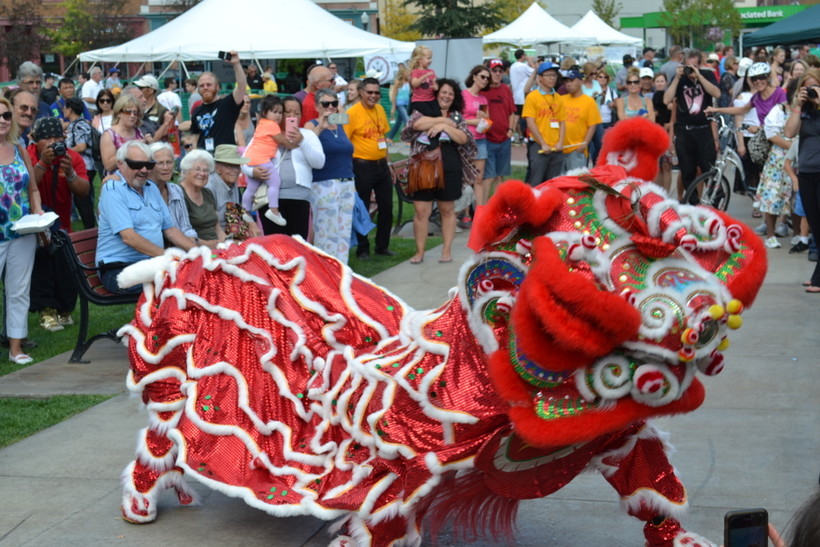 Visitors to the first International Wisconsin Ginseng Festival are welcomed to downtown Wausau by the traditional Chinese lion dance.

Men in ornate, red and gold costumes snaked through throngs of people in downtown Wausau on Saturday, performing the traditional Chinese lion dance and welcoming hundreds of visitors from around the world to the first International Wisconsin Ginseng Festival.

People in Asia have used the medicinal root for thousands of years, but cultivation of the root didn't begin in the United States until a little more than 100 years ago in central Wisconsin.

Two of the region’s biggest growers, Hsu's Ginseng Enterprises founder Paul Hsu and his son Will, watched the lion dance from their company’s booth in the city’s 400 Block park.

"We've got people coming in from Japan, Hong Kong, Taiwan, China, all the Chinatowns in the U.S. and also Canada. This is great," Paul Hsu remarked.

Will Hsu, now vice president of the family business, used a Chinese spiritual analogy to describe the difference between ginseng grown in the U.S. and its Asian cousin.

"American ginseng is yin or cooling. It's a tonic meant to alleviate stress and promote overall health. Asian ginseng, which is another species, is yang or hot, stimulating, more like caffeine," he explained.

Ginseng grown in the U.S. is highly prized in Asia. Ninety-five percent of the crop is grown in central Wisconsin, where it commands a premium price, and contributes $20 million a year to the local economy. 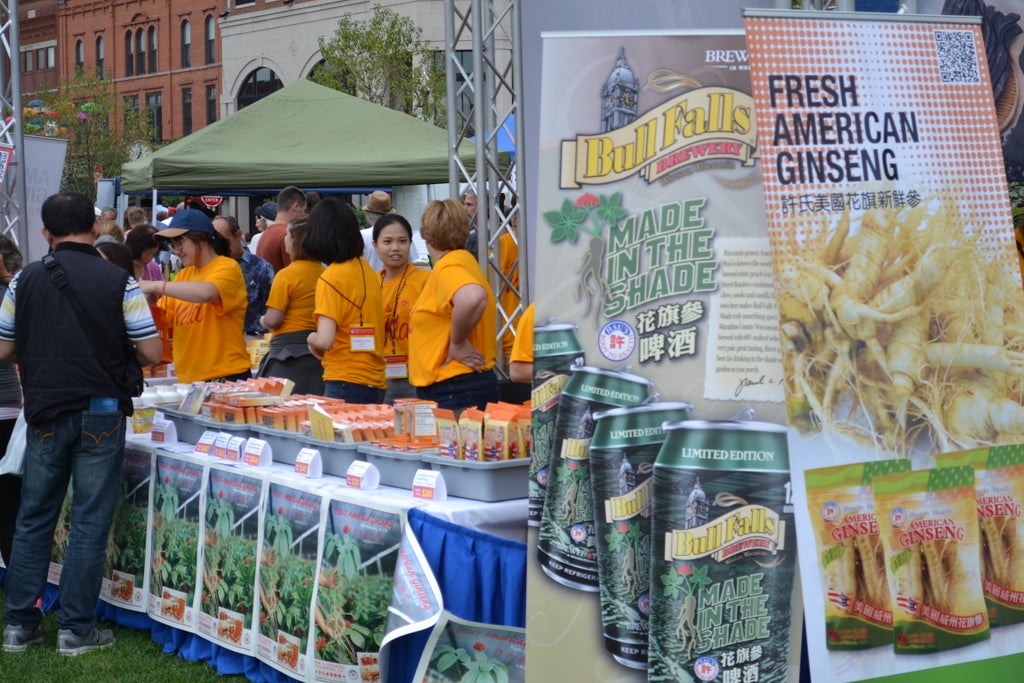 Lt. Gov. Rebecca Kleefisch, who has been promoting the festival for more than a year, welcomed the foreign visitors.

One local politician, state Sen. Jerry Petrowski, R-Marathon, is a former ginseng farmer who is introducing a bill to make ginseng the official herb of Wisconsin.

"I'm a believer. I take it every day," Petrowski said. "It's fairly well accepted that Wisconsin grows the best ginseng in the world."

The festival is the brainchild of Lisa Berry of the Wausau/Central Wisconsin Convention and Visitors Bureau.

"Pretty much everyone here has some story, like my grandpa farmed ginseng, or my grandma worked on a ginseng farm," Berry said. "It was just so neat to hear those stories, and so I thought, you know, let's make something out of it, something special."

Berry got dozens of businesses and organizations across Marathon County involved. Together, the community organized ginseng exhibits at area museums and bookstores. Restaurants had ginseng-infused menus. Signs were printed in Mandarin.

"We're the first place in Wisconsin to have bilingual signage in English and Chinese," Berry said.

Shuttle buses took international visitors to the Fromm Brothers historic site in Hamburg, 20 miles northwest of Wausau, where a pioneering family first discovered how to cultivate wild ginseng in 1904.

Naksoom Bae traveled to Wisconsin with 15 people from Chicago, all of whom speak Korean as their primary language.

"Ginseng is very famous in my country," Bae said. "We believe it’s good for longevity."

At ginseng farms in rural Weston and Edgar, tourists could dig their own roots under the canopies that provide shade for the notoriously hard-to-grow plants. 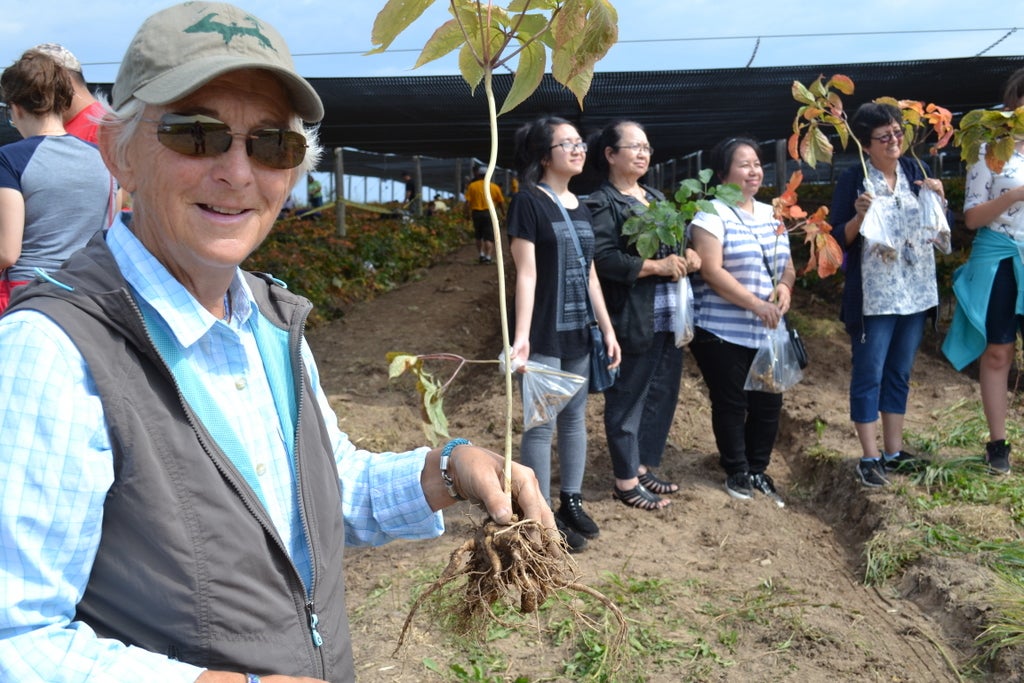 Pat Szopinski displays the 5-year-old ginseng plant she dug out of the soil at a ginseng farm in Wisconsin. Glen Moberg/WPR

Pat Szopinski from Delafield proudly displayed a large, 5-year old plant that she had carefully removed from the soil.

"You're given a fork to dig it out so you don't break off all the fibrous material." Szopinski said. "Now I have to figure out what to do with it."

Zhonglin Xie and his wife Ninsang Yang came all the way from Beijing, accompanied by their daughter-in-law, Leanne Zhu, of Green Bay. 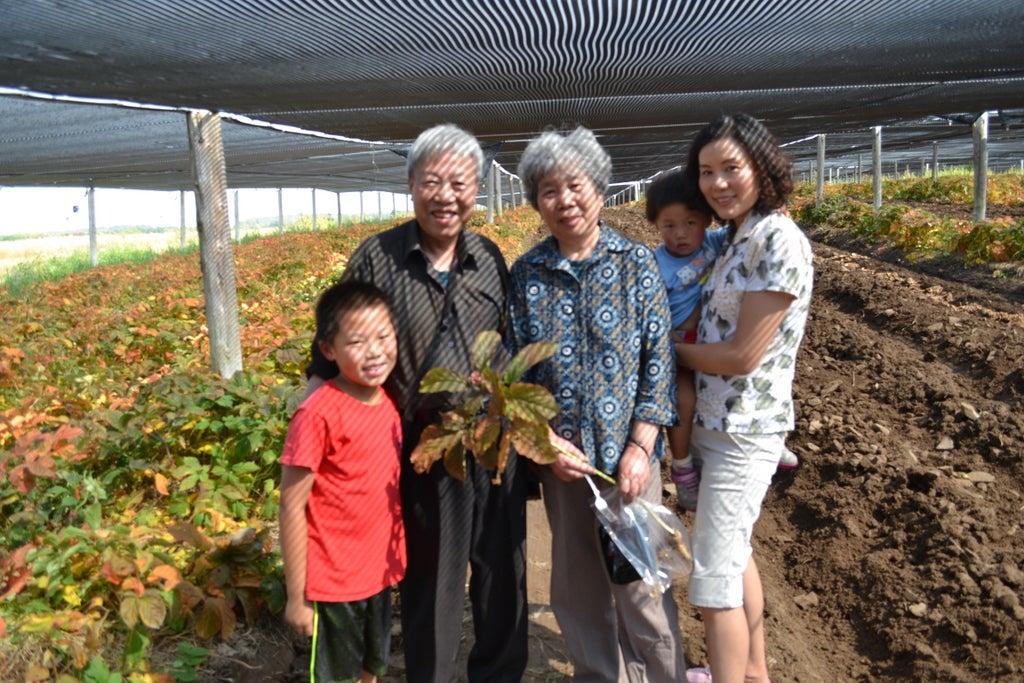 "This is their first time actually seeing how ginseng is grown." Zhu said. "We always see the final products, you know, the dry ginseng roots, in grocery stores and medicine stores in China."

Others came from China for business. Qing Hua Zhang is a developer and ginseng trader from Guangzhou in south China.

"I sell American ginseng in China," Zhang said, through a translator. "Wisconsin ginseng is the best quality in the whole world. And that's the reason that brought me to Wausau."

The central Wisconsin crop has seen its ups and downs in recent years due to price fluctuation and competition from Canada and China. There are now 180 growers in central Wisconsin, down from more than 1,000 several years ago.

Paul and Will Hsu said farmers can get discouraged, because it takes up to six years to grow ginseng, and for reasons not fully understood, a field that grows one ginseng crop can never grow another one.

"It's a capital intensive and labor intensive crop," Paul Hsu said. "It's not an easy crop to go. It has to be tended."

Will Hsu continued, "In (the) 43 years that we've been in business, we have never planted on the same land twice. This industry with over 100 years here in central Wisconsin, no one has ever intentionally planted twice on the same land."

The Hsus and festival organizers hope that central Wisconsin’s ginseng industry gets a boost from the weekend the world came to Wausau.