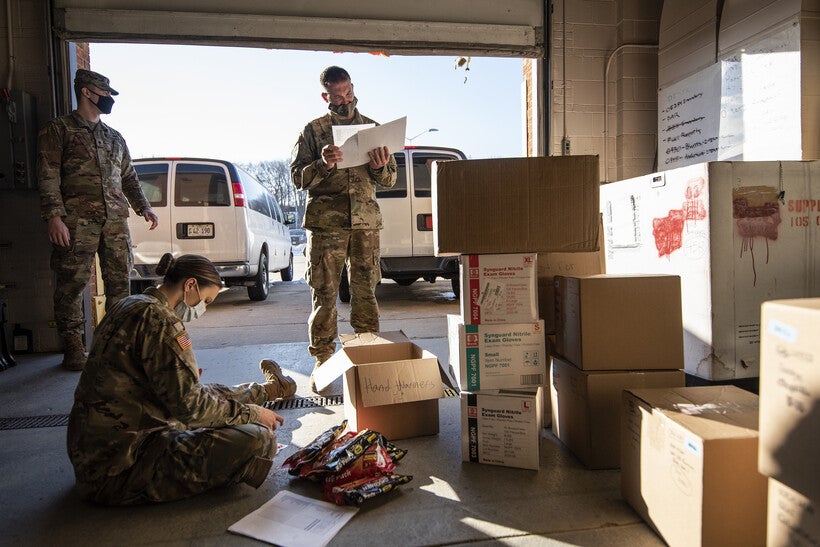 Members of the Wisconsin National Guard load boxes with hand warmers and PPE on Monday, Dec. 21, 2020, before distributing them to COVID-19 testing sites across the state. Angela Major/WPR

There’s a warehouse in Madison full of personal protective equipment (PPE). It contains everything the Wisconsin National Guard needs to safely and effectively respond to the COVID-19 pandemic: nitrile gloves, N95 masks, hand sanitizer, coronavirus test kits, and more. Chief Warrant Officer 2 Matt Hipp has overseen the warehouse since the beginning of June.

"I'm in charge of the inventory, reorder and the distribution of all of that PPE and test kits to the teams," he said. "Out of that warehouse, we have 34 soldiers that actually hop in vans ... and they're actually driving that all across the state because, you know, we have missions from Milwaukee all the way up to Ashland, Wisconsin."

Hipp is one of the more than 1,600 Wisconsin National Guard troops who have been called to respond to the state’s fight against COVID-19 in 2020. 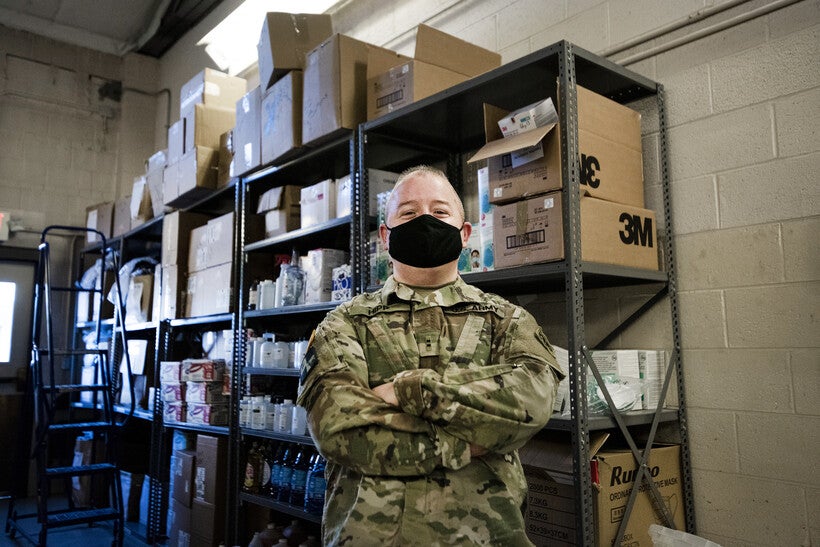 Chief Warrant Officer Matt Hipp at the PPE warehouse in Madison. Members of the Wisconsin National Guard distribute PPE and other gear to COVID-19 testing sites across the state. Angela Major/WPR

That response has resulted in nearly 1 million COVID-19 tests administered by the National Guard, with little sign of slowing down — even as the vaccine becomes available.

"We still have this gigantic mission of meeting to continue testing, to continue trying to reduce the numbers, because ... this vaccine won't be widely available till summer, fall to the general public," Hipp said. "So, in that time, the only way that we can continue to, you know, fight against the pandemic is to keep testing."

It has been an unprecedented year for the Wisconsin National Guard, with more missions occurring in the state at one time than ever before. According to spokesperson Maj. Joe Trovato, 2020 has seen "the largest sustained domestic mobilization in our history."

The duration of those missions is also unique. While typical assignments — like responding to natural disasters — last days to a couple of weeks at a time, the pandemic response has been ongoing since March.

Master Sgt. Emily Decker was called up in March. From the Manitowoc area, but currently stationed in Brookfield, she said she feels like she has been living in hotels for most of the year. Decker is the officer in charge of one of the Guard’s COVID-19 testing teams. Since the beginning of the pandemic, she’s overseen three teams that have set up and worked nearly 200 testing sites — oftentimes traveling one to two hours a day to each site.

"It's crazy ... I never thought I would be responding to a pandemic of all things," Decker said. "When you're in the National Guard, you think of natural disasters like flooding, or tornado disasters, things like that, but not necessarily a pandemic."

And while she said it’s been a privilege to be a part of the state's pandemic response, it’s also been a challenge.

"It has challenged me personally and professionally. It has taken me away from my home and my civilian job for more time than I've ever been away," Decker said. "I've worked closely alongside (U.S.) Army counterparts ... I've met numerous EMS directors and (state) Department of Health Services professionals ... I can't remember a year in my life, that my learning has been so diverse." 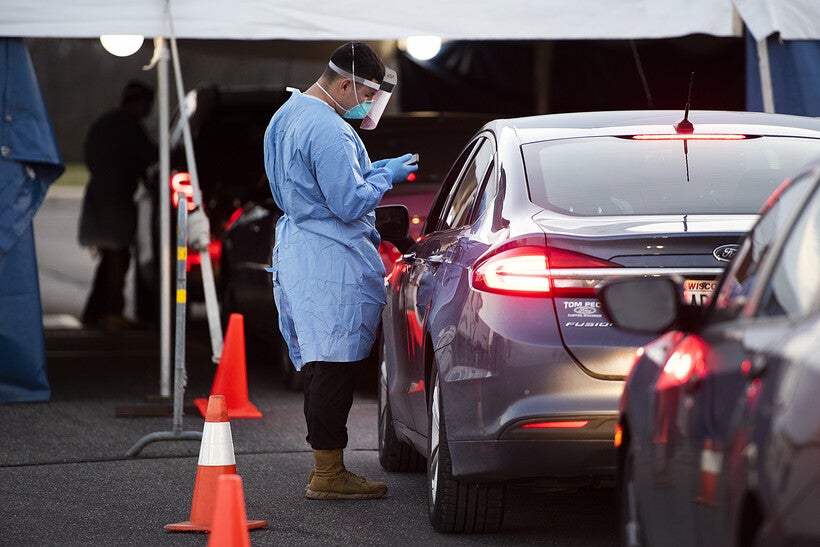 This year also marked the first time the Wisconsin National Guard has played a role in the state's elections.

April’s spring election saw an unprecedented shortage of poll workers due to the coronavirus. In order to fill that gap, 2,500 Guard troops filled in as poll workers in 71 of the state's 72 counties.

Capt. Alicia Dorsett was one of those troops. She worked a poll in her hometown of Poy Sippi, south of Waupaca, alongside her mom and members of the community she grew up in.

"It's not just sitting there waiting for people to come in and vote. It's just so much more," she said. "It's a bonding experience for all of us that are there. And being in the military, the right to vote is really important to me."

Aside from wearing a mask, socially distancing and sanitizing surfaces, she said it felt like any other Election Day. Service members also wore civilian clothes to ensure no voter felt intimidated when casting their vote.

"Being in uniform, that can kind of scare some people, so we're just part of the community helping out and that's the message we really wanted to get across. We're there to help you, not to deter you going to the polling locations," Dorsett said.

Another 160 troops aided in May’s 7th Congressional District special election. Later in the year, nearly 700 helped during the August primaries and 450 responded during November’s presidential election.

But before the Guard could respond to the governor’s request to help at the polls, Maj. Gen. Paul Knapp said they had to make sure it was legal. Federal soldiers and airmen are prohibited from participating in elections, but according to Knapp, the way Wisconsin’s statutes are written, Guard members are able to work at polling places as state employees.

"We really plowed new ground, not just here in Wisconsin, but in the country in terms of election support," Knapp said. "A number of states around the country have followed our lead, and used National Guard soldiers and airmen over the course of this last year to assist in their elections as well."

In May, the state activated the Wisconsin National Guard in response to widespread demonstrations over the killing of George Floyd by Minneapolis police. In its initial response, more than 1,200 service members worked with local authorities in Milwaukee, Madison, Green Bay, Racine and Kenosha.

More troops mobilized in Madison in June after statues were pulled down by protesters and a state senator was beaten during a demonstration. An additional 2,000 members of the National Guard were called to Kenosha in August after protesters mobilized when police shot Jacob Blake, a Black man. And another 500 responded to demonstrations in Wauwatosa in October after an officer was cleared in the fatal shooting of a 17-year-old boy. 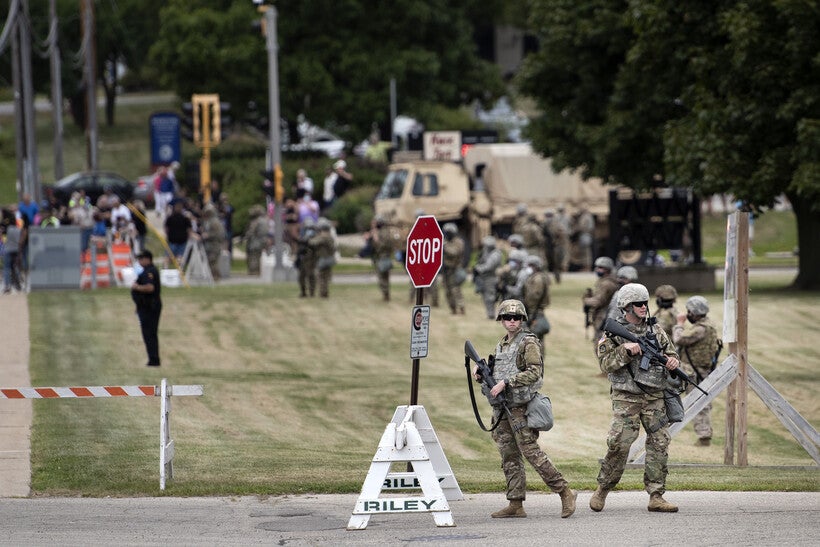 The Guard’s initial response was seen by many as an escalation of what were mostly peaceful protests. In response to that criticism, Knapp said it's important to note that the National Guard never self deploys and is only there to promote public safety.

Dorsett, the Guard captain, responded to demonstrations in Milwaukee, Kenosha and Wauwatosa, and echoed Knapp’s sentiment.

"The soldiers and airmen of the Wisconsin National Guard, they're people from your own communities, right? We're your family, we're your friends, we're your neighbors, and we all took an oath when we raised our right hand, to protect and defend the Constitution of the United States, and that includes the right to peacefully protest," she said. "Our job was to protect life and property and to keep all people safe including the protesters. So, for me, there really shouldn't be a concern, because we're your people."

A Year Unlike Any Other

And if responding to a global pandemic, staffing an election and assisting during widespread demonstrations wasn’t enough, Knapp said there were still more than 1,000 Wisconsin National Guard members who deployed overseas in 2020.

The sheer number of missions completed this year has been astounding, he said.

"This is an unprecedented mobilization of the National Guard. In Wisconsin, we've never had this many service members mobilized inside our state for this many days. And it has taken its toll on our soldiers and airmen," Knapp said. 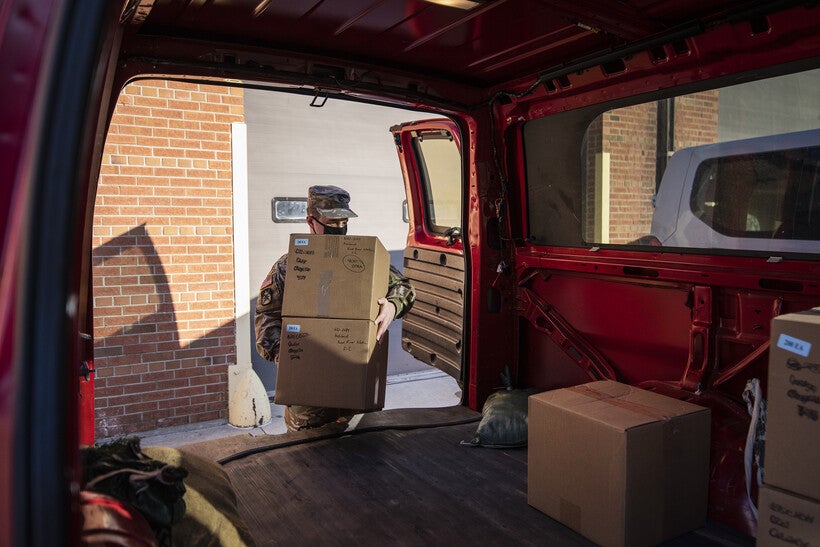 A member of the Wisconsin National Guard loads boxes of PPE into a van Monday, Dec. 21, 2020, outside of a warehouse in Madison. Angela Major/WPR

But members of the National Guard said it has also made them more visible than ever before.

"Yeah, front and center. And I can't say how proud I am of how the soldiers and airmen reacted when put in that spotlight — whether it was at a test site or during a civil disturbance — they just performed admirably time and time again, and it really is heartwarming to see those great Americans — our neighbors — out there fighting to get us through," said Knapp.

For Dorsett, this year has amplified how important the Wisconsin National Guard can be in times of crisis.

"Many see the Guard as simply weekend warriors. But we are so much more than that," Dorsett said. "We're always on call to help our communities. And this year has certainly been a demonstration of that."