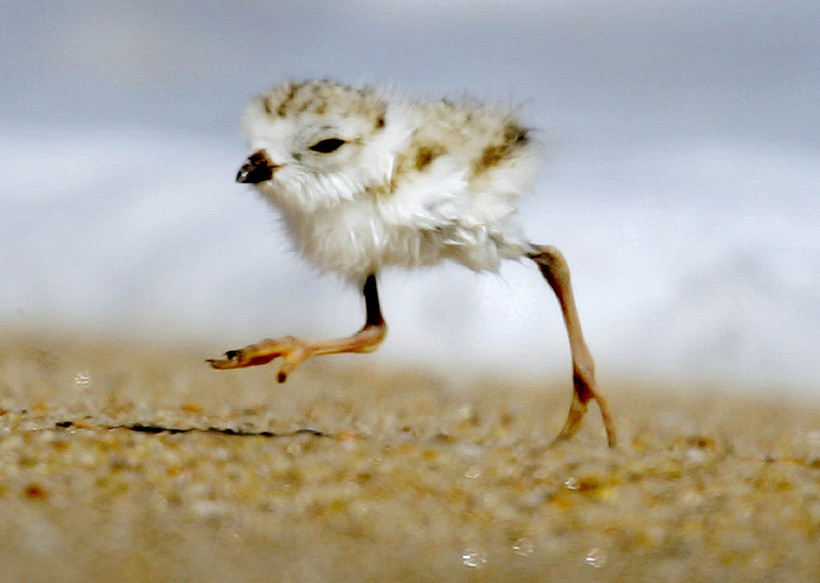 In this July 12, 2007 photo, a two-day-old piping plover runs along a beach in the Quonochontaug Conservation Area in Westerly, R.I. A court fight to protect the piping plover, a bird listed as "threatened" under the federal Endangered Species Act, is holding up a $207 million plan to replenish sand along a 19-mile stretch of shoreline on New York's Fire Island. The sand was eroded during Superstorm Sandy. Steven Senne/AP Photo

An endangered shorebird may get a reprieve after facing threats from high water on the Great Lakes.The U.S. Fish and Wildlife Service says there’s more suitable habitat for piping plover to nest as lake levels are subsiding.

While the water is still high, lake levels have been dropping and aren’t expected to reach the record highs seen last year. Rising water in the past two years has closed in on the birds' nesting areas, shrinking their habitat and posing a challenge for their recovery.

"Some of the habitat looks the best that it has in over 10 years," said Jillian Farkas, the agency’s Great Lakes piping plover coordinator. "Some of our sites that haven't had a piping plover in over 20 years in Michigan are seeing even some pairs."

Farkas said that includes Donner’s Point on North Manitou Island at Sleeping Bear Dunes National Lakeshore where two birds that were reared in captivity last year have been spotted.

Last year, 64 nesting pairs were observed across the Great Lakes and 60 nests have been spotted so far this year. A record 76 pairs were recorded in 2017. Farkas is cautiously optimistic that they’ll see 70 nesting pairs by the end of the season, noting storms or predators could change that. Last year, they had around 10 more nests than normal early in the season, but severe weather took out many of them before chicks could hatch.

Wildlife officials observed the first hatch at a nest in Sleeping Bear Dunes on June 1, which is home to the majority of the region’s piping plover nests.

"Over the next few weeks, we're going to really start having chick mania, where a lot of the sites will be having chicks present," Farkas said. 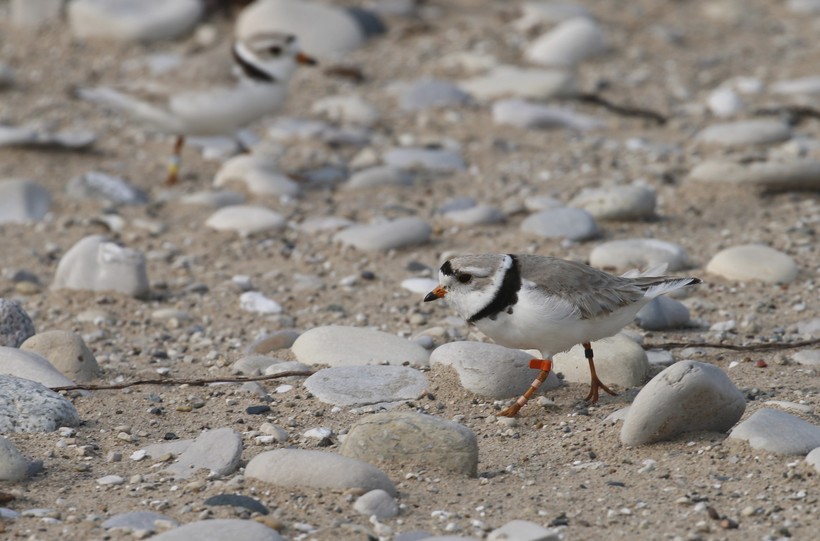 In this May 30, 2019 photo, a piping plover walks on the sand in Glen Haven, Mich. Trouble is brewing for the piping plovers, already one of the Great Lakes region's most endangered species, as water levels surge during a rain-soaked spring that has flooded large areas of the Midwest. John Flesher/AP Photo

Wisconsin ranks second for the amount of nests observed at the Cat Island Chain in Green Bay and the Apostle Islands National Lakeshore on Lake Superior. Five nests were found at Cat Island last year while four nests were spotted on Long, Michigan and Outer Islands within the lakeshore.

Piping plover prefer large, undisturbed pebble beaches that help camouflage their eggs from predators, according to Julie Van Stappen, a spokesperson for the Apostle Islands National Lakeshore. But, beaches on the islands shrank as water levels increased. She said that, combined with intense storms, scattered wood and debris that reduced the quality of habitat on Long Island where the birds have long been found.

"The beach is significantly larger this year," said Van Stappen. "So maybe if not this year, maybe next year, we start getting additional nests on (Long Island) because it does have room for habitat. Hopefully, we keep the ones on Michigan, Outer, (and) potentially Stockton (islands)."

Staff from the National Park Service and Wisconsin Department of Natural Resources will head out to check for nests on the Apostle Islands this week. Sumner Matteson, a DNR avian ecologist, said they’re hoping to confirm whether any plovers have nested after spotting two pairs on Michigan and Outer islands in recent weeks in addition to two pairs on Long Island.

Piping plover are federally endangered in the Great Lakes region, unlike other parts of the nation where they’re considered threatened. The number of nesting pairs is much lower compared to the Northern Great Plains and Atlantic Coast, which each have close to 2,000 nesting pairs. Federal wildlife officials hope to restore the Great Lakes population to around 150 nesting pairs. 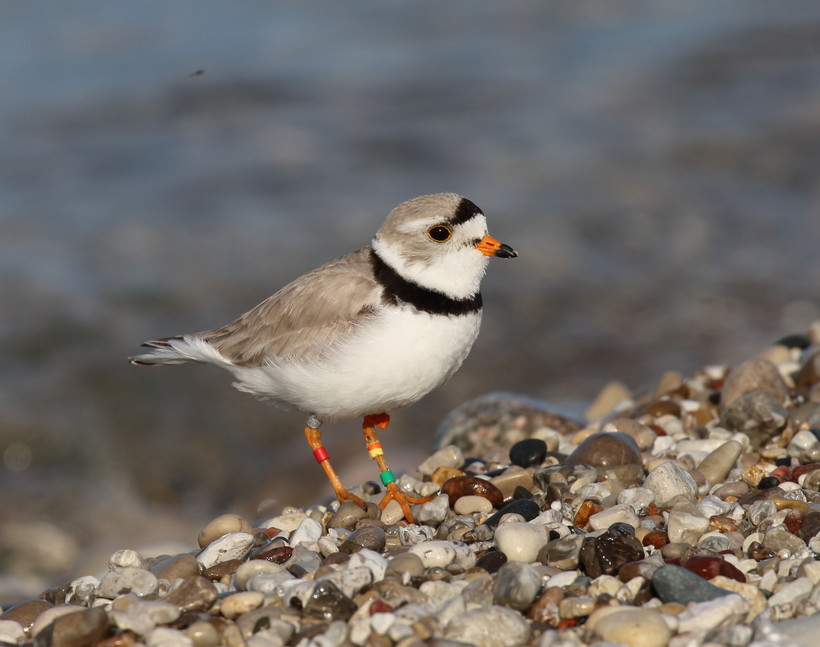 In Superior, state and federal agencies and local partners have worked to establish a new nesting site for piping plover on Wisconsin Point facing Allouez Bay. More than 87,000 cubic yards of sand dredged from the Duluth-Superior harbor was used to expand the beach within the Wisconsin Point Bird Sanctuary. The project was designed and built by the U.S. Army Corps of Engineers in collaboration with the Wisconsin DNR and supported through funding from a federal Great Lakes cleanup program.

Matteson said one piping plover was spotted there last year. He’s hopeful one or two pairs will nest at the site.

"It's really never looked better for piping plovers than then now," said Matteson. "With lower lake levels, we're seeing that the habitat is intact, and we're not experiencing the kind of erosion that we saw last year."

Yet, challenges remain as humans and their pets often frequent the same sites that attract the endangered shorebird. The St. Louis River Alliance conducts monitoring of Wisconsin and Minnesota Points for piping plover. Kris Eilers, the group’s executive director, advises people to keep their dogs on a leash, heed posted signs, and avoid the site on Wisconsin Point from now through the end of August.

"It's definitely possible for humans to make room and live together with these endangered species," said Eilers.