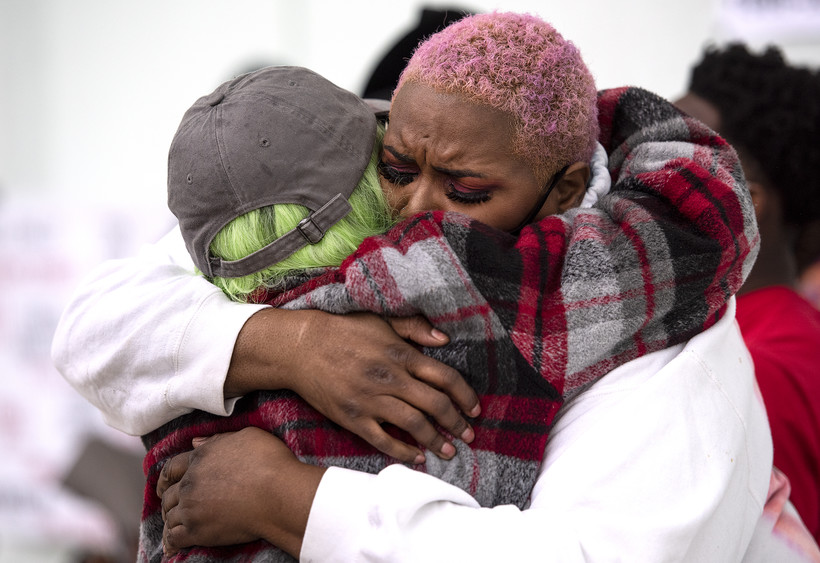 Doretha Lock, right, mother of Christopher Davis, hugs Kamila Ahmed after both shared memories and calls to action Sunday, May 23, 2021, in Milwaukee, Wis. Davis was killed by a Walworth County sheriff’s deputy in 2016. Angela Major/WPR

George Floyd Was The Catalyst, Now These Wisconsinites Won’t Stop Until There Is Real Change

The People's Revolution Marks 1 Year Of Marching In Milwaukee
By Corrinne Hess
Share:

Doretha Lock was a child in 1981 when she heard about Ernest Lacy, a Black man who died while in the custody of Milwaukee police.

What followed Lacy's death — the details of which are still unclear all these years later — was weeks of protest in the city similar to the reaction to George Floyd's murder in Minneapolis 40 years later.

At an event hosted by The People's Revolution on May 23, Lock said she never expected tragedies like these to touch her own life.

"I just didn't think it was real until they knocked on my door," Lock said, holding back tears at the Remember Their Names event honoring 14 Black men killed by police in the Milwaukee area since Lacy's death.

Her own son, Christopher Davis, was killed in 2016 by a Walworth County Sheriff's deputy during what the sheriff's office called a drug investigation.

Davis called Lock while he was being taken to the hospital to tell her he loved her.

"And he said it to me five times," Lock said. "But let that be the last word I hear when I close my eyes, 'Mamma, I love you.'"

In the year since Floyd was murdered by Minneapolis police on May 25, 2020, The People’s Revolution has been fighting for change. The group has marched nearly every night since May 29, 2020, and has won small victories. But the work is far from over. 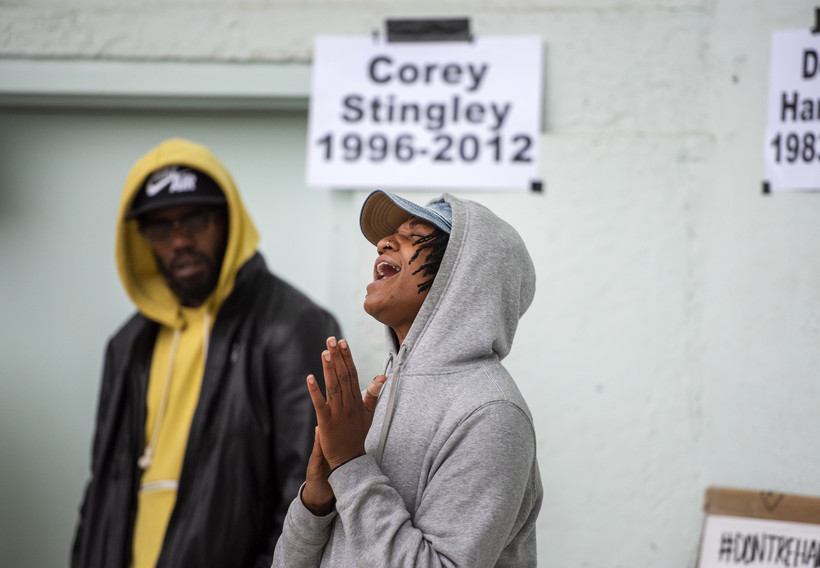 Mariah Smith speaks during the event Sunday, May 23, 2021, in Milwaukee, Wis. Angela Major/WPR

Mariah Smith, 29, has been one of the organizers of the activist group since the beginning. She was motivated by Floyd’s death, but said she is out every night because of people like Ahmaud Arbery and Breonna Taylor, who were killed in places where they should have been safe. 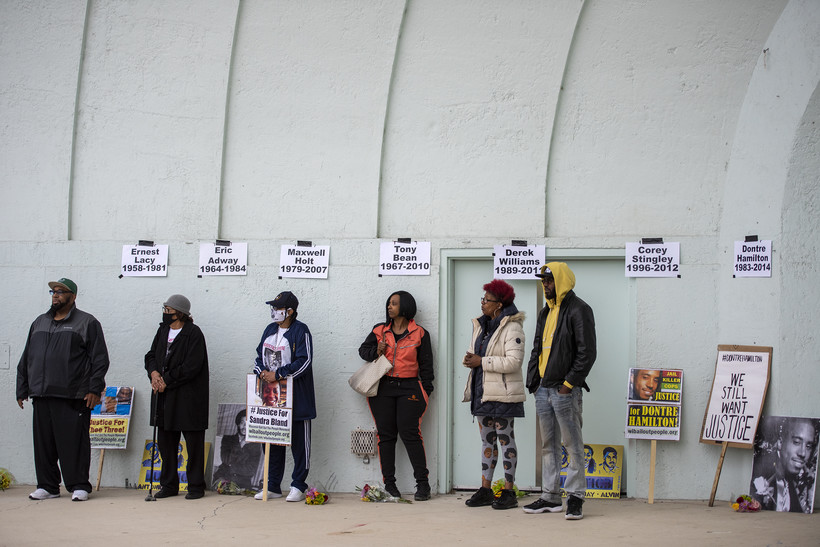 Families attending the event stand in the Washington Park Bandshell as speakers give a call to action Sunday, May 23, 2021, in Milwaukee, Wis. Angela Major/WPR

Early on, The People’s Revolution, created right after Floyd's death, made a list of demands. They include asking the state Legislature to ban no-knock warrants and chokeholds. They also called for the Milwaukee County district attorney to step down.

These things haven't happened, but in the City of Milwaukee, chokeholds have been banned. In neighboring Wauwatosa, police are now wearing body cameras.

Smith said those are small victories The People's Revolution celebrates.

"The war has not been won," she said. "It's little battles that we're winning and that honestly is what keeps us going." 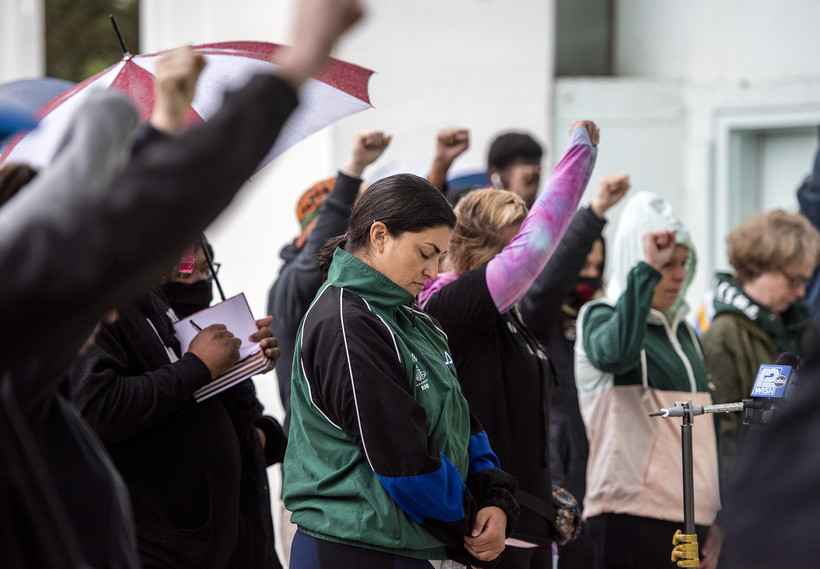 Attendees raise fists in the air during a moment of silence Sunday, May 23, 2021, at Washington Park in Milwaukee, Wis. Angela Major/WPR

A bipartisan Legislative task force created last summer is suggesting 18 changes to Wisconsin policing. These include limiting, but not banning, chokeholds and expanding community engagement.

State Rep. David Bowen, D-Milwaukee, has attended several People’s Revolution events over the last year. He said locally, the group has made strides, but the state GOP, which controls the state Legislature, doesn't understand the needs of Black residents in Milwaukee.

State Sen. Van Wanggaard, R-Racine, heads the Senate's judiciary committee and has been working with the task force. He said his bills and the work the task force has done were developed with the input and support of minority communities.

"Some of (Bowen's) views about policing are dangerous and put Black, brown, and white lives at risk, and show a lack of respect for not just the law but law enforcement," Wanggaard said in a statement to WPR. "Representative Bowen and the 'People’s Revolution' should focus their anger on the criminals causing the crime epidemic in Milwaukee rather than focusing his anger on those arresting the criminals and trying to make our neighborhoods safer."

One of the most visual members of The People's Revolution is Maria Hamilton. Hamilton's own son, Dontre, was shot 14 times by a Milwaukee police officer in 2014.

Dontre had a history of mental illness and was sleeping on a park bench when former Officer Christopher Manney approached him and the two got into an altercation. Dontre was unarmed.

Hamilton said she would like to see what some might consider a radical change: Police officers taking money out of their own pension funds to pay families whose loved ones are killed by officers.

But The People's Revolution has become more than an organization that plans marches and pushes for new laws. They're a community. Lock celebrated Mother's Day with the group and Hamilton has traveled the country reaching out to countless mothers across the country whose children have been killed by police. 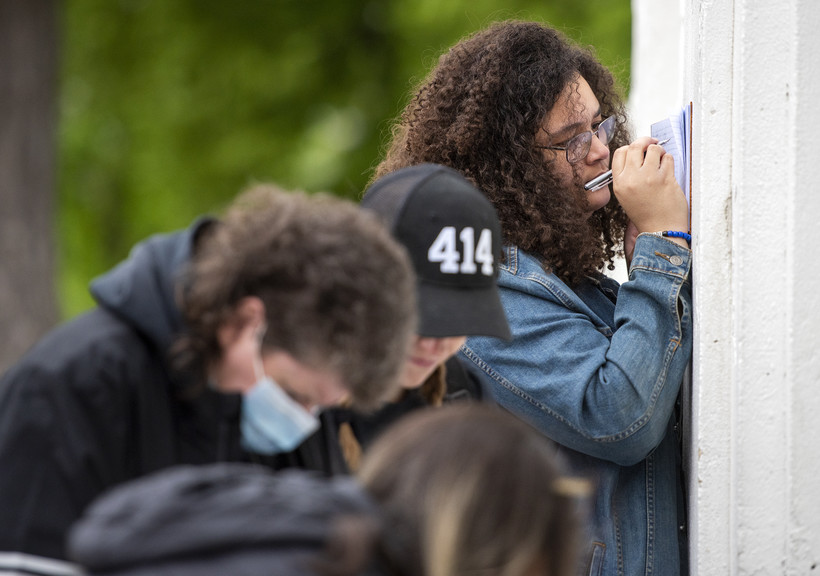 Attendees write notes for families who attended the event Sunday, May 23, 2021, in Milwaukee, Wis. Angela Major/WPR

On the day of the Remember Their Names event, Hamilton was supposed to go to Minneapolis to be with Floyd’s family. But, she wanted to be with her community.

Floyd’s murder is what got The People’s Revolution to the streets, but his death isn’t what is keeping them there.

Smith said the group will continue marching until Black Wisconsinites can feel safe taking a jog, lying in their beds and being pulled over by police. 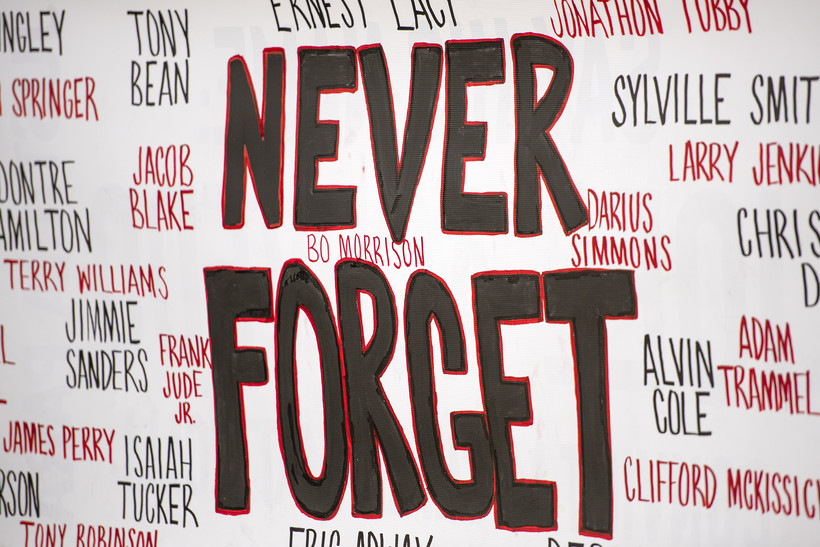 A sign is hung on the wall of the Washington Park Bandshell on Sunday, May 23, 2021, in Milwaukee, Wis. Angela Major/WPR