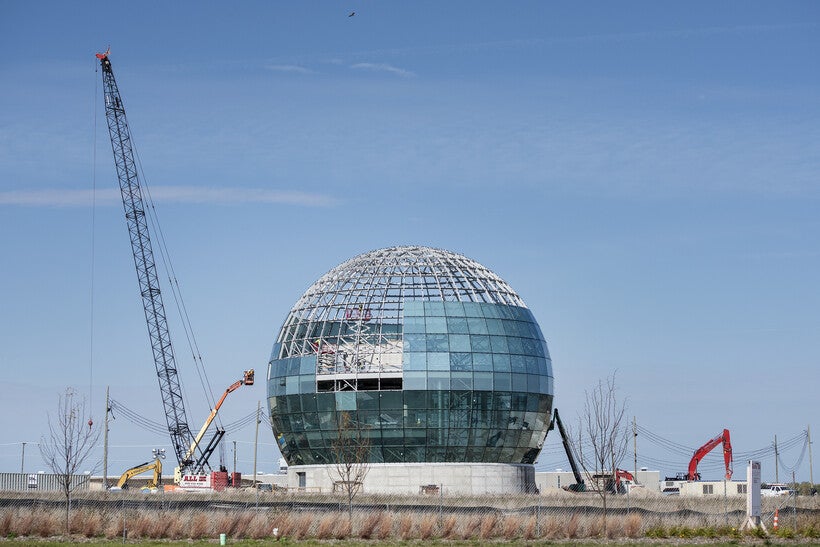 Foxconn's Next Challenge: Fulfill Promises Made To Racine County Taxpayers

Three years after committing to build a state-of-the-art manufacturing facility and create 13,000 jobs in Wisconsin, Foxconn has fallen short on those promises. Now, the company has three years to deliver on another commitment: to begin paying back Racine County taxpayers.

Racine County and Mount Pleasant have made substantial upfront investments in infrastructure and land acquisition for the project since 2017. In return, Foxconn was expected to invest $10 billion in private investment in Mount Pleasant by 2023.

To date, $550 million has been invested in Mount Pleasant by the company.

In 2017, Foxconn had proposed what it called a "Generation 10.5" facility that would manufacture LCD monitors and create up to 13,000 jobs in Mount Pleasant. In return, the state signed a $3 billion tax incentive deal based on job creation. Had everything gone as planned, the "break-even point," for Wisconsin taxpayers would have been 2042, according to a memo written Oct. 7 by Joel Brennan, secretary of the state Department of Administration.

But the company has not followed through on that original contract with the state. Nor has it renegotiated its contract, something the Wisconsin Economic Development Corp. (WEDC) — the state's primary economic development agency — has been asking for since 2019.

Under the original contract, Foxconn was expected to have 2,080 people employed by the end of 2019. The company had employed 281 people in 2019, according to WEDC.

By Jan. 1, 2019, Foxconn was supposed to have begun construction on its $10 billion manufacturing facility. A 120,000-square-foot storage facility was built in 2018. Last year, a 1-million-square foot building intended for manufacturing was built. Brennan’s Oct. 7 memo states Foxconn has received permission to instead use that building for storage.

Now, a globe-shaped structure is under construction at the site, which the company says will house a network operations center.

Local officials said the money would pay for land acquisition, infrastructure upgrades and other expenses. The costs were expected to be recouped over 30 years with funding and property tax revenue from Foxconn and other businesses in the district.

"Current taxpayers," said the village and county when the district was created, "are not bearing any new burden."

Under a developer agreement with local municipalities, Foxconn must still make minimum tax payments regardless of the project’s completion status. Those payments must begin in 2023.

Despite the company’s other broken promises, Racine County and village officials say they believe Foxconn will follow through on money owed to taxpayers.

Racine County Executive Jonathan Delagrave praised Foxconn for being the county’s largest taxpayer. The money Foxconn pays in taxes goes toward the special taxing district, though, not in the general fund.

The tax district payments starting in 2023 will be the equivalent of about $30 million a year, Lois said.

"Foxconn continues to meet all financial obligations outlined in the local development agreement, and we remain confident that the strong protections put in place by local officials will fully protect the taxpayers of Mount Pleasant and Racine County," Lois said.

Foxconn officials did not respond to a request for comment. On Monday, the company released a statement on behalf of founder Terry Gou, saying Foxconn will stay committed to Wisconsin as long as policymakers at the federal, state, and local levels remain committed to the company.

"The world has changed a lot since Foxconn’s partnership with Wisconsin began, but Foxconn’s commitment to the state has not wavered. Market conditions and the Covid-19 pandemic have altered the timing of our expansion, the specifics of our manufacturing plans, and our product lines have changed. But through it all, Foxconn has pressed forward with its Wisconsin plans," the statement said.

Rob Henken, who heads the nonpartisan Wisconsin Policy Forum, said the local governments put protections in place when creating the developer agreement. There's the requirement the company starts making its tax payments in 2023. Also, if the company defaults on its payments, the agreement specifies the state of Wisconsin is on the hook for a portion of those.

Henken said it’s impossible to know if Foxconn will follow through on its pledge to make payments to Mount Pleasant.

"There are certainly several layers of protection that the village very carefully considered and put in place that were designed to protect it against unforeseen circumstances," Henken said. "Whether those layers of protection are sufficient to protect Mount Pleasant and its taxpayers, that’s still a question mark no one can answer. Also, the enforceability, given that this is an international firm, and this would need to be settled in an international court of law."

Specifically, the developer’s agreement includes a "moral obligation" pledge from the state that covers 40 percent of Mount Pleasant and Racine County’s debt in the event the revenues from the special taxing district are insufficient.

That means, even though WEDC denied giving Foxconn state tax incentives earlier this month, after the company failed to meet the hiring requirements in its contract, Wisconsin taxpayers could still be on the hook.

Brennan told WPR there needs to be continued conversation and more specificity with Foxconn about where things are going.

"It’s very clear after three years that they are not engaged in the project that was contracted for in 2017," Brennan said. "The state continues to meet its obligations under the contract, the local communities have also met their obligations. We all believe Foxconn should live up to their agreements. We expect to have productive conversations with our local partners because regardless of the outcome here, we want to make sure taxpayers in Mount Pleasant, taxpayers in Racine County, are not left holding the bag for this."

Brennan said he hopes to avoid a scenario in which Foxconn reneges on its local obligations.

"The reason why the state has been clear for more than a year in its communication with Foxconn in making sure we can create a contract that really aligns the project that we are doing with the available state resources, is so we can hopefully keep us from being engaged in lengthy, expensive court actions around this," Brennan said.