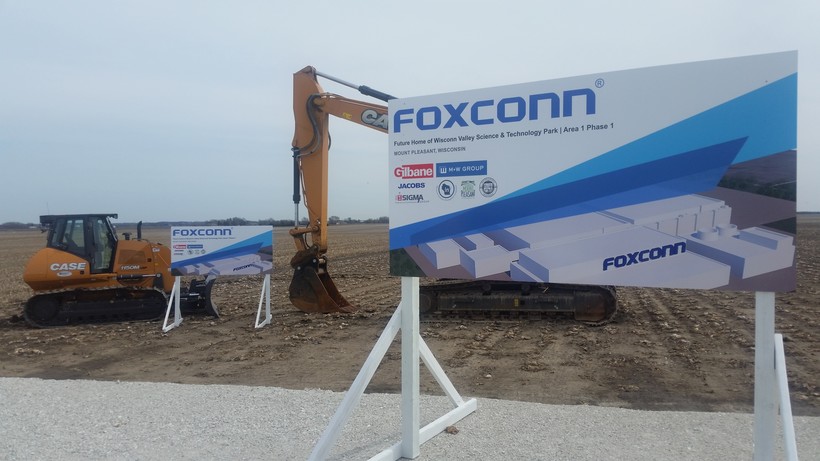 Foxconn Technology Group is not eligible for tax credits unless the company amends its original contract with the state, according to the Wisconsin Economic Development Corp., or WEDC.

The state Department of Administration and WEDC have reaffirmed to Foxconn both verbally and in writing that the Gen 6 plant that the company is building in Mount Pleasant does not qualify for tax credits, according to letters obtained by technology website The Verge.

When the original contract was signed, Foxconn promised to build a 22-million-square-foot Gen 10.5 plant.

"Foxconn was opaque about its project plans throughout 2018 and did not commit to any specific type of project different than the Gen 10.5 facility defined in the contract," DOA Secretary Joel Brennan wrote in a letter dated Nov. 22.

Since setting its sights on Wisconsin in 2017, Foxconn’s plans have repeatedly changed. The company was originally going to build large flat screens with a so-called Gen 10.5 plant. Foxconn said market changes prompted the company to shift to a smaller Gen 6 facility.

In early 2019, Foxconn executives hedged briefly on whether they would be doing any manufacturing in the state at all. Now, they say the Gen 6 facility will begin operating in 2022, which has recently been pushed back from 2020.

Also at issue is that not all of Foxconn’s entities are named in the original contract, said David Callender, WEDC spokesman. Specifically Foxconn International Internet (Fii), the Taiwanese company’s arm that focuses on automation and networking systems for intelligent manufacturing.

Foxconn has been touting its Fii brand in recent months, particularly with what it plans to do in the Gen 6 plant.

"In order for a new entity to qualify for the credits, an amendment to the original contract would need to be underwritten, approved and executed, as outlined above, prior to the new entity being eligible for the credits," Callender wrote in an email to WPR Friday.

Alan Yeung, Foxconn's director of U.S. Strategic Initiatives, could not immediately be reached for comment Friday. In a letter dated Nov. 18, Yeung said Foxconn is greatly surprised and disappointed that the DOA and WEDC would not certify the Gen 6 plant.

"Foxconn will continue to play an important and constructive role in the State of Wisconsin; however, at this point, we shall be evaluating all available options relating to the WEDC contract," Yeung wrote.

A $3 billion incentives package was approved by the GOP-controlled state Legislature in 2017. Incentives are based on job creation. That same year, the village of Mount Pleasant and Racine County created a special financing district to pay for a $764 million investment to support the Foxconn project. The investment has since been increased to $911 million.

WEDC receives a report from Foxconn on Dec. 31 each year to determine if the company qualifies for the state jobs credits. Foxconn has until April 1 to report the Dec. 31 numbers, Callender said.

Foxconn fell short of its employment goal in 2018, hiring 178 full-time workers instead of the targeted 260. As a result, it failed to earn a tax credit of up to $9.5 million.

One of the issues outlined in a letter dated Nov. 13 from WEDC CEO Melissa Hughes to Foxconn had to do with Fii.

"Fii is not a party to the WEDC incentive contract," Hughes said. "Fii would need to follow, should it wish to become eligible for state incentives for its future investments and hiring."