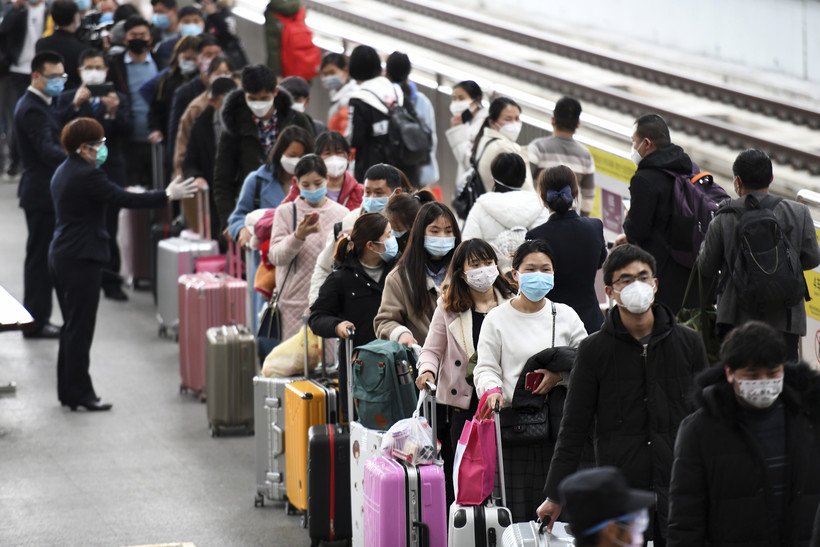 In this photo released by Xinhua News Agency, workers returning from Henan province alight from a specially arranged train at the Shenzhen North Railway Station before dividing into groups to be bused to their workplace in Shenzhen, southern China's Guangdong Province, March 5, 2020. Factories are gradually reopening in China months after the new coronavirus that first emerged there upended daily routines. Liang Xu/Xinhua via AP

A Fox Valley electronics manufacturer cut its second-quarter earnings estimate by $40 million, or about 5 percent, this week due to supply chain disruptions caused by the novel coronavirus and efforts to contain it.

Todd Kelsey, CEO of Plexus, told investors its factories in China were up and running as of Wednesday morning. He said no Plexus employees were affected by the virus. The Neenah-based electronics manufacturing company operates locations across Asia, Europe and North America.

"Our primary focus still remains on our employees' health and safety, as well as satisfying our customers," he said.

While it's a fluid situation, Kelsey said the supply chain in China is improving daily. He noted operating costs are also likely to increase during the second quarter because it took the production facilities time to get back online and "significant overtime" could be required.

COVID-19 is caused by a member of the coronavirus family that's a close cousin to the SARS and MERS viruses that have caused outbreaks in the past.

COVID-19 is expected to have a major impact on the global economy. Projections have become increasingly pessimistic in recent weeks as the virus has continued to spread, said Ian Coxhead, a University of Wisconsin-Madison economics professor. He noted some forecasts predict negative economic growth in the U.S. during the second quarter or even over the whole year.

"The fortunes of any company in the state or in the U.S. are going to be, first of all, determined by the macroeconomic health of the U.S. economy," Coxhead said.

Coxhead, who specializes in global trade, said Plexus could be "a little bit of a canary in a coal mine." He noted Wisconsin manufacturers of parts and components with close ties to China are likely to feel the effects of COVID-19 first.

"To the extent that a company like Plexus has more activity in China, the much greater slowdown in the Chinese economy will have a disproportionate effect on them," he said.

The best-case scenario for Wisconsin businesses would be a small second-quarter downturn, Coxhead said. For that to occur, there would have to be a very limited spread of the virus, he added.

There isn't enough information available to predict a worst-case scenario, he said. The extent to which COVID-19 will impact Wisconsin businesses will depend on whether people will be able to go to work and if there will continue to be a demand for products made in Wisconsin.

The only person in Wisconsin to test positive for the virus has made a full recovery. More than a dozen additional tests are pending, according to the Wisconsin Department of Health Services.