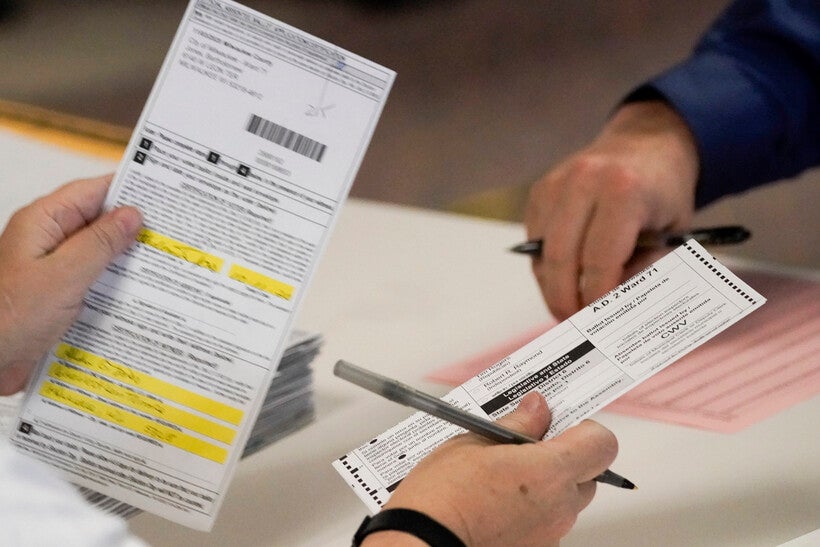 The former Milwaukee elections official who told investigators she sent fake military absentee ballots to a state lawmaker has pleaded not guilty to three counts of election fraud. Kimberly Zapata, who also faces a felony charge of misconduct in public office, was ordered to have no contact with the lawmaker or her former boss in the elections commission.

Zapata was fired from her job as deputy director of the Milwaukee Elections Commission days before the Nov. 8 midterm election after Mayor Cavalier Johnson learned from her supervisor that Zapata admitted she sent improperly-obtained ballots to state Rep. Janel Brandtjen, R-Menomonee Falls.

A criminal complaint against Zapata included a summary of an interview with investigators, in which she said she made up names when requesting the military ballots and sent them to Brandtjen.

"Zapata did this because she wanted to make a point that there is fraud in existence. She stated that it is not the conspiracy there, but she wanted to bring the actual true fraud out," said the complaint.

Zapata said she used fake names because she knew a ballot could only be issued in the name of a real person. She also said she was "overwhelmed" by threats of violence and "daily harassment" the elections commission was receiving.

In a statement, Brandtjen, who currently chairs the Assembly's Committee on Campaigns and Elections, said she received three military ballots at her home address Oct. 27 with what appeared to be made-up names. Brandtjen has been criticized for embracing conspiracy theories about the 2020 election and calling for its decertification.

Brandtjen filed a lawsuit in Waukesha County Circuit Court Nov. 4 asking that military ballots be set aside until it could be determined they were cast legally. The judge refused the request less than 14 hours before the Nov. 8 election saying doing so would be a "drastic remedy" that could disenfranchise voters.

Milwaukee County Judicial Court Commissioner Maria Dorsey set a $2,500 signature bond for Zapata and ordered her not to conduct any election administration work as the case proceeds. Dorsey also ordered Zapata not have any contact with Brandtjen or Milwaukee Elections Commission Executive Director Claire Woodall-Vogg.

Zapata's attorney, Abigail Bongiorno, told Dorsey her client was still "technically employed" by the elections commission but not actively participating in election administration. Bongiorno also said Woodall-Vogg was a personal friend of her client and they discuss things that aren't work related. Bongiorno is an attorney with the conservative public interest law firm the Thomas More Society, which has been involved with numerous election lawsuits leading up to the November election.

"I don't see why they would have no contact," said Bongiorno.

Milwaukee County Assistant District Attorney Matthew Westphal responded by stating the no contact order is necessary because Woodall-Vogg is a witness in Zapata's case.

A preliminary hearing for Zapata is scheduled for Dec. 9 at 1:30 p.m.

Zapata's case is similar to one from Racine County, where Harry Wait of Dover admitted in July that he fraudulently requested absentee ballots for Speaker Vos and Racine Mayor Cory Mason, who is a Democrat. Wait said he requested the fraudulent ballots to expose flaws with the state's MyVote Wisconsin website.

Wait is facing two felony counts of "unauthorized use of an individual's personal identifying information" and two misdemeanor charges of election fraud.