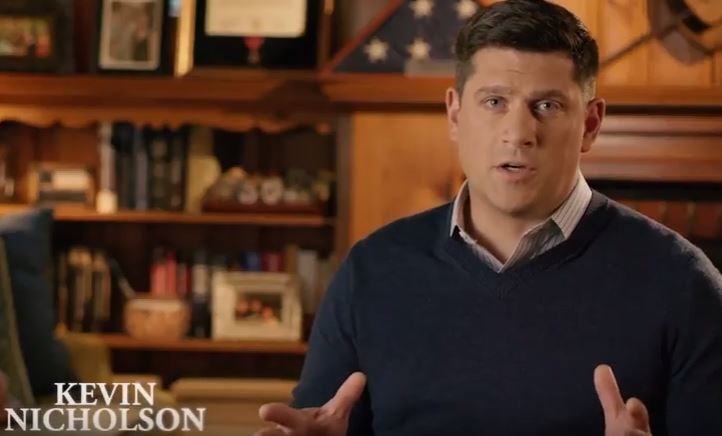 A former Marine and former Democrat has become the first Republican to get into the race to challenge Democratic U.S. Sen. Tammy Baldwin next year.

A former Marine and former Democrat has become the first Republican to get into the race to challenge Democratic U.S. Sen. Tammy Baldwin next year.

Republican Kevin Nicholson of Delafield launched his campaign Wednesday with a video that casts himself as a "conservative outsider" and emphasizes his military service. He is also promoting his ivy league education and his corporate background.

"Tammy Baldwin is a disaster on national security. She's dead wrong on the economy. She's liberal, divisive and honestly just embarrassing," he says in the video.

Nicholson was expected to get into the race. A political action committee supporting him that's backed by Uline Corp. founder Richard Uihlein has already raised $3.5 million to back his candidacy.

Wisconsin Democratic Party spokeswoman Gillian Drummond responded to Nicholson's announcement saying that Nicholson is only out for himself and can't be trusted. She said he's "in the pocket of an out-of-state billionaire whose money he'll rely on to bankroll his campaign."

Uihlein, who lives in Illinois, has contributed all of the the pro-Nicholson PAC's fundraising.

Vukmir said Wednesday she has a proven conservative track record, but she doesn't know if Nicholson does.

Vukmir said his announcement doesn't change her plans and she will make her decision known in the coming weeks. Vukmir said she is focused on continued state budget talks and a possible deal for electronics giant Foxconn to build a factory in the state.

Nicholson was national president of the College Democrats of America and spoke at the Democratic National Convention in 2000. He was a Democrat as recently as 2005 but he said his migration to the Republican Party was complete by 2007.