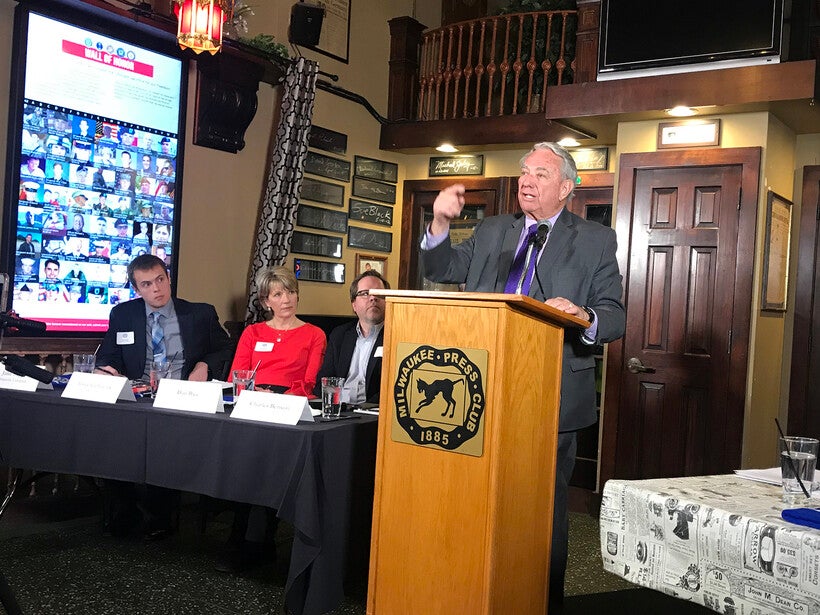 "Dane and Milwaukee counties were the best organized they had ever been," Thompson told a standing-room only crowd at the Newsroom Pub in downtown Milwaukee on Wednesday.

Other than possibly bringing President Donald Trump to suburban Milwaukee to electrify Walker's base, there was nothing else his fellow Republican could have done to win another term, Thompson said.

Thompson is the longest-tenured governor in Wisconsin — serving from 1987 to 2001 — before he was appointed by President George W. Bush as U.S. secretary of Health and Human Services. Thompson is now managing his family's 1,500-acre farm in Elroy. He recently released a book, "Tommy — My Journey of a Lifetime," co-authored by Doug Moe.

Thompson said he knew state Republicans were in trouble during the current election cycle when liberal Milwaukee County Judge Rebecca Dallet overwhelmingly won a Wisconsin Supreme Court seat in April. Dallet received 81 percent of the vote in Dane County, where she was relatively unknown.

"Nobody, not Walker, not Tommy Thompson, or any Republican can withstand that kind of vote total," Thompson said, referring to the turnout in Dane and Milwaukee counties last week. "And when you put together the fact that the WOW counties, the college-educated women really didn't like Trump and therefore, they voted against Scott Walker."

The WOW counties — Waukesha, Ozaukee and Washington counties — that surround the city of Milwaukee have been a reliable part of Republican base.

Since the election, Thompson has met with Assembly Speaker Robin Vos, R-Rochester, and Majority Leader Scott Fitzgerald, R-Juneau, who he said are willing to work with Gov.-elect Tony Evers despite early barbs saying they would attempt to limit his power once in office.

Evers has also reached out to Thompson, he said, although the two haven't yet connected.

"I've always said once the election is over, let's forget about the Rs and the Ds. Let's move forward as Wisconsinites and build Wisconsin," Thompson said.

The former governor said that a good place for the politicians to start compromising would be on road construction.