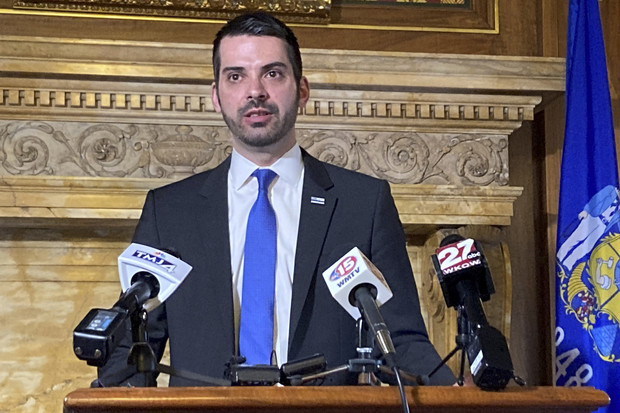 Eric Toney, the Fond du Lac County district attorney and a Republican candidate for attorney general, discusses a complaint he filed with Democratic Gov. Tony Evers seeking the removal of five members of the state's elections commission on Tuesday, April 12, 2022, at a news conference in the state Capitol in Madison, Wisconsin. Scott Bauer/AP Photo

Toney ran on his record as a district attorney, boasting that he was the only prosecutor in the GOP race. Jarchow, who outraised Toney, questioned Toney's conservative bona fides and promised to use the office to fight against the Democratic Party.

Toney boasted of his endorsements from a large group of sheriffs and police representatives and said cracking down on violent crime would be a top priority. He's called for a change in state law that would allow the attorney general to take over cases that Milwaukee County District Attorney John Chisholm declines to prosecute. Jarchow ran on his opposition to stay-at-home orders during the early days of the COVID-19 pandemic, and promised to fight against "illegal" government mandates.

It's also a position that is often involved in the hot political debates of the day. In June, Democratic Attorney General Josh Kaul and Gov. Tony Evers filed a lawsuit in an attempt to block the state’s 1849 abortion ban from taking effect. In recent years, Kaul has sued the maker of firefighting foam that contaminated Wisconsin waters with PFAS and has joined multistate lawsuits against Facebook's business practices, the Trump administration's Census practices and the makers of opioids.

In February, Toney announced voter fraud prosecutions against five Fond du Lac County voters after they illegally listed a UPS Store post office box as their voting address. Critics have called that an "abuse" of prosecutorial discretion because those charged were eligible to vote and may not have understood that the P.O. Box was not a valid address.

Kaul won the office in 2018 in the Democratic wave that also brought Gov. Tony Evers to office. Kaul, a former federal prosecutor who ran unopposed in the Democratic primary, has touted the end of the state's backlog of sexual assault kits and his office's work on securing funds for Wisconsin to fight the opioid epidemic. Republicans have blamed Kaul for the increase in homicides in Wisconsin in recent years.

Mueller campaigned on her strident opposition to vaccination campaigns for COVID-19 and other diseases and on advocacy for "constitutional carry," a policy allowing gun ownership without permits.