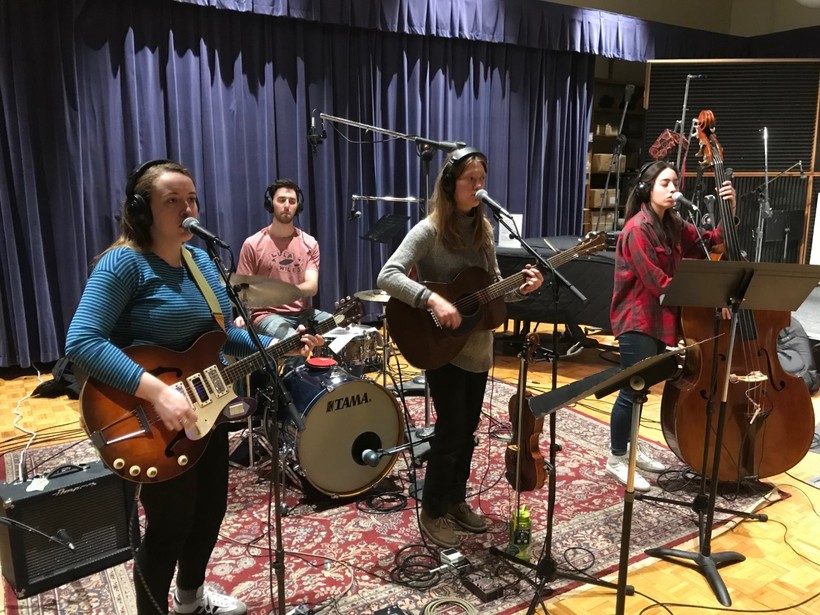 Strong Instrumentals, Vocals Mark Group's Latest Album, 'What Will We Do'
By Dan Robinson
Share:

Bass player Mali Obomsawin said, "I would have never probably thought that I could play the bass if I didn't see Esperanza Spalding and Bridget Kearney and amazing female bass players just doing their thing. And I'm grateful for that, but I'm also wary to celebrate where we are too much because there's still so far to go."

The trio of Obomsawin, Isa Burke, and Eleanor Buckland were recently in WPR’s studio for an interview for WPR's "Simply Folk" and to perform a few tunes from their recently released album, "What Will We Do."

Lula Wiles released its first, self-titled recording in 2016. But before that, they grew up with folk music, sharing songs and fiddle tunes at camp in their home state of Maine.

"All of us were lucky to have access to the folk music community at a young age," said Burke. "The music traditions that we're drawing on are social, community-building traditions."

"What Will We Do" highlights not only their songwriting and harmony vocals, but also their instrumental skills, especially Burke's guitar work. With their music, they've continued passing on that possibility they inherited.

"I've had younger gals come up to me and say that they're inspired to learn new things on the guitar," Burke said, "because they saw me play, and that makes everything else worthwhile."

That sense of community in folk and roots music that they grew up with has continued for the band. Buckland was reminded of that recently when she ran into musician, band leader and record producer Alison Brown at a folk music convention.

But for female musicians, they said, it's a fine line between supporting women in the industry and focusing too much on their gender.

Not being afraid of topics and questions like these is a part of the band and its music. That's reflected in the new album.

"The album title obviously came from the song," Burke said, "which is an old, traditional ballad that we sort of re-worked ... It's a cool name for an album because it's a question. I think that kind of grabs people's attention and makes them want to know more.”

She added, "I like that the title of the album comes from traditional music because that's kind of the background that we all come from."

The tracks on the disc range from the country-influenced "Nashville, Man" to the heartfelt "Independence Day," including social commentary on "Good Old American Values," and highlighting their vocals on the title track and Burke’s guitar work on "Hometown."

"We wanted to make an album that reflected, in a current way, what we are all staying up late thinking about and talking about over drinks at the dinner table," said Obomsawin. "What is everyone worried about, confiding in their friends about, losing sleep about?"