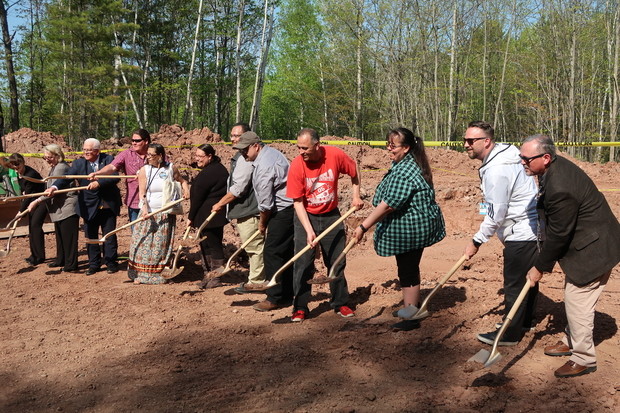 Representatives of Red Cliff and FirstNet, along with state and federal officials, broke ground on the new 300-ft. cell tower on the tribe's reservation last May. Danielle Kaeding/WPR

Cell service on the Red Cliff tribe’s reservation has improved significantly after a 300-foot cell tower became fully operational recently. The tribe is the first in the country to construct a tower as part of a nationwide public safety broadband network for emergency services.

The Red Cliff Band of Lake Superior Chippewa worked with AT&T and the First Responder Network Authority (FirstNet) on a deal to build the tower, which is now providing coverage to 80 percent of the reservation. FirstNet is an independent authority that was established by Congress in 2012, and it’s providing roughly $6.5 billion to improve public safety communications.

"Without that service, there was no redundant first responders communication anywhere outside of land mobile radio, and there was no way for anyone to contact somebody in the event of an emergency," he said.

The creation of FirstNet stems from a recommendation to establish a public safety network after challenges with emergency communications during the 9/11 terrorist attacks. The network prioritizes cell coverage for emergency services.

Only about 20 percent of the reservation was previously served by cell service. The tower extends coverage to all residential areas of Red Cliff, as well as surrounding towns and much of the Apostle Islands National Lakeshore.

Lacking cell coverage was noted in the death of a Loyal family who was kayaking in the Apostle Islands over Labor Day weekend in 2018. Eric Fryman and his three young children died while kayaking on Lake Superior. His wife, Cari Mews-Fryman, survived. Although, her calls and texts for help went unanswered for hours.

"Any tourists that are coming up into the area — visitors and businesses — will be able to use the service to conduct business to do anything that they need to do across the world," he said. "It’s bringing us up into the 21st century."

"This cell tower will not only give our first responders the critical ability to communicate in areas that they were not able to previously, but it will also enhance the ability of commercial cell phone users to report emergency incidents," Peterson said. "We are also proud that Red Cliff was the first tribe in the country to have completed a FirstNet cell tower."

The cell tower is the result of around 15 years of efforts to expand service in the area. AT&T and FirstNet officially launched the cell and wireless broadband service Friday, Jan. 31.