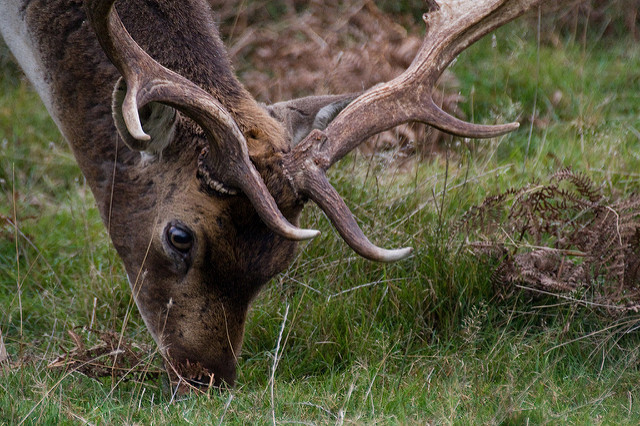 Still Unknown If Semen Can Transmit The Disease
By Miranda Suarez
Share:

For the first time, the proteins that cause chronic wasting disease have been detected in white-tailed deer semen — which is a commodity for deer farmers, who sell it for breeding purposes.

CWD is a neurodegenerative disease that affects animals like deer and elk. It is contagious and always fatal. Trademark symptoms include wasting away and erratic behavior.

Researchers at the University of Texas, Colorado State University’s Prion Research Center, and the U.S. Department of Agriculture analyzed samples from 21 white-tailed deer bucks, culled from farms across the country. Nine were CWD-positive.

"In terms of disease transmission, the presence of prions in semen begs the question on whether sexual contact is plausible route of CWD transmission," the study reads.

The study concludes that further research is needed to answer that question.

Laurie Seale runs Maple Hill Farms, a white-tailed deer farm in Gilman, and is the vice president of Whitetails of Wisconsin (WOW), a deer-farming industry organization. She said they still don’t know for sure how CWD is spread, and it will take a lot more study for her to be concerned about prions in semen.

"They've been doing research for over 30 years, and it just seems like we don't know any more now than we did back then," she said, laughing.

Nicholas Haley, a CWD researcher and assistant professor at Midwestern University in Glendale, Arizona, said scientists have a pretty good idea of what spreads CWD. Likely the most common method is through exchange of saliva, such as when two deer chew on the same branch, he said.

Haley, who was not involved in the study, said this research is just the beginning of a years-long process to learn more about CWD in semen. Part of the problem is that no one knows what constitutes a dangerous level of prions.

"We could go in one direction and say that this is unacceptable to have any prions in semen, or we could take a step back and say let's try to figure out exactly what this means," he said.

The sample size of the study was very small, so future studies will have to test more samples, Haley said. Plus, the researchers used a process called Protein Misfolding Cyclic Amplification (PMCA), where researchers take a sample with a potentially low concentration of prions and amplify them to more detectable levels.

The study authors have moved their infectivity research to mice, with the goal of figuring out the fundamental question: Is CWD sexually transmittable?

"Future experiments in actual deer will determine whether CWD can be transmitted by breeding practices including sexual contacts or artificial inseminations," the study reads.