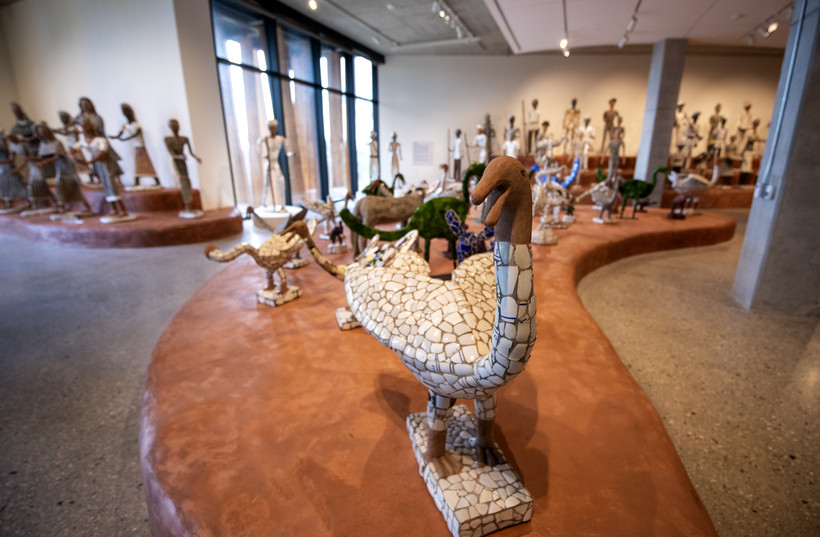 Nek Chand’s artwork is displayed across an upper floor of the Art Preserve in Sheboygan, Wis. Angela Major/WPR

First Museum Of Its Kind Set To Open Saturday In Sheboygan

A visit to Art Preserve, a new Sheboygan County museum that opens Saturday, starts with a bar. It’s an evocation of Fred Smith’s bar up in Phillips, to be exact. The tavern owner was also a famous sculptor.

"We really want this to feel really comfortable and really welcoming for everyone," she said. "You can come in and get a beer, and you don’t even have to look at the rest of the museum if you don’t want to."

Of course, Smith was known for more than his bar. With more than 200 sculptures, his concrete park is still a popular Northwoods attraction. But not every artist-built environment has met such a happy fate.

That’s where Art Preserve comes in. An annex of the nonprofit Arts Center, the new museum is the first of its kind, focused on conserving and displaying the objects that amassed around artists who just couldn’t stop making.

It celebrates the impulse to create — something we all have to some extent, said Sam Gappmayer, director of the Arts Center.

The urge was strong for West Allis artist Eugene Von Bruenchenhein, who features in Art Preserve’s origin story, Bickford said. He sculpted crowns with clay from his garden, crafted thrones out of poultry bones and photographed his wife, Marie. He created "profusely," she said. 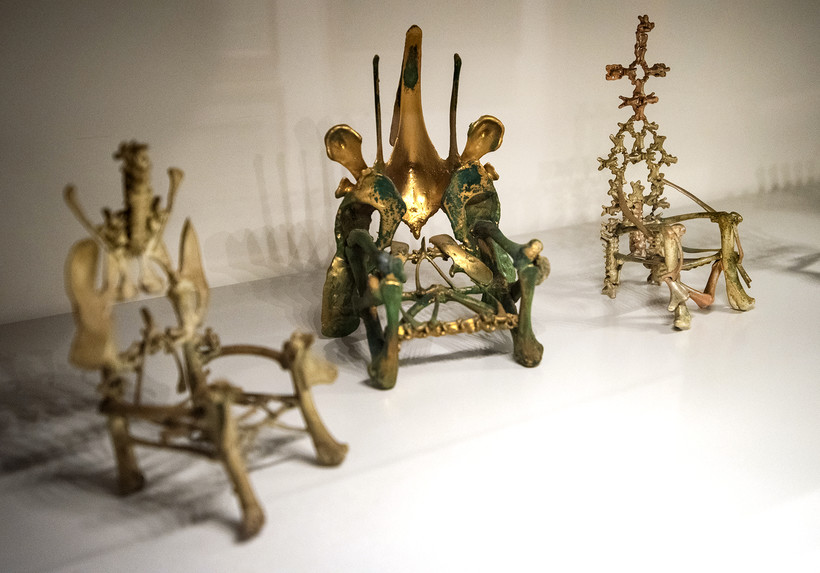 Thrones made of poultry bones crafted by artist Eugene Von Bruenchenhein are on display at the Art Preserve. Angela Major/WPR

Over the years, Von Bruenchenhein developed a friendship with a police officer who visited the artist's house on his beat. When Von Bruenchenhein died in 1983, the man worried about Marie and worked to attract interest in the artist's collection. He contacted the Milwaukee Art Museum, who referred him to Ruth DeYoung Kohler, former director of the Arts Center. Up to that point the Arts Center, an exhibition space, wasn't a collecting institution. But when Kohler visited Von Bruenchenhein's home, it was a profound experience, Bickford said.

"She instantly sort of realized, like, we can't just have one painting," she said. "No one will understand the breadth and depth of his world, and so the first acquisition the Arts Center made was about 6,000 objects that came out of his house." 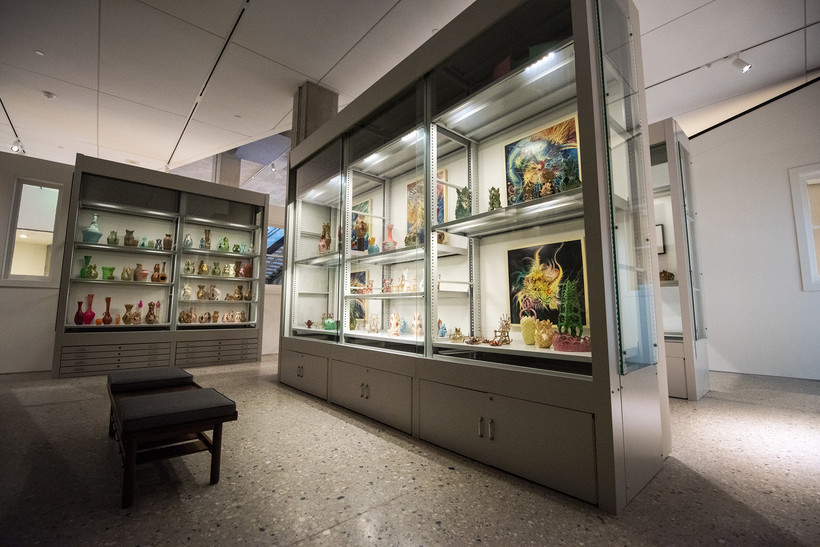 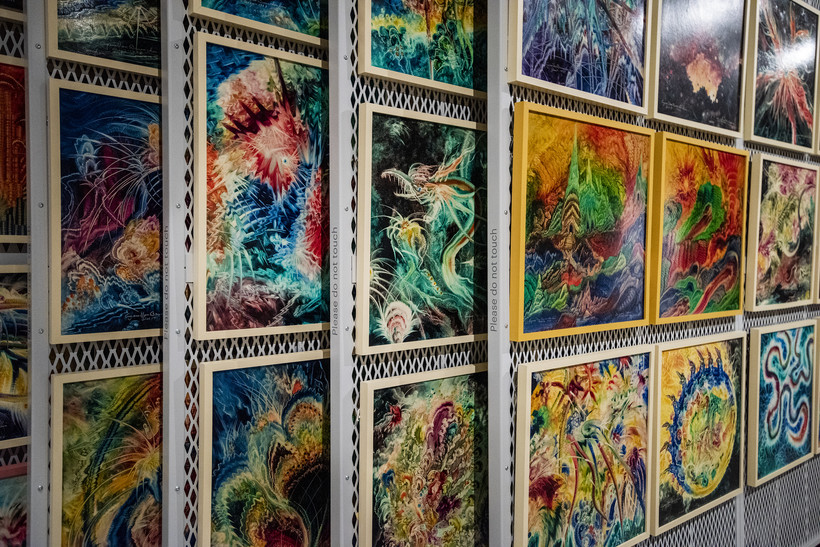 At Art Preserve, everything is always on display. When it comes to Von Bruenchenhein, the use of visible storage allows visitors to see just how densely he lived among his work. Much of it’s showcased in a small structure within the museum that matches the footprint of his home.

Artist-built environments often spring up where artists live because that’s the space they have access to, Gappmayer said. There are other examples at Art Preserve, including a collection of items from Stella Waitzkin’s apartment in New York City’s famed Chelsea Hotel.

Unlike Von Bruenchenhein, Waitzkin was an art world insider who studied with Willem de Kooning, an abstract expressionist, and palled around with poet Allen Ginsberg. She was a performance artist, and she cast hundreds of books in gemstone-colored resin — a metaphor on knowledge, Bickford said. In fact, she named her apartment "Details of a Lost Library."

They’re most impactful when they’re experienced as a whole, Gappmayer said. 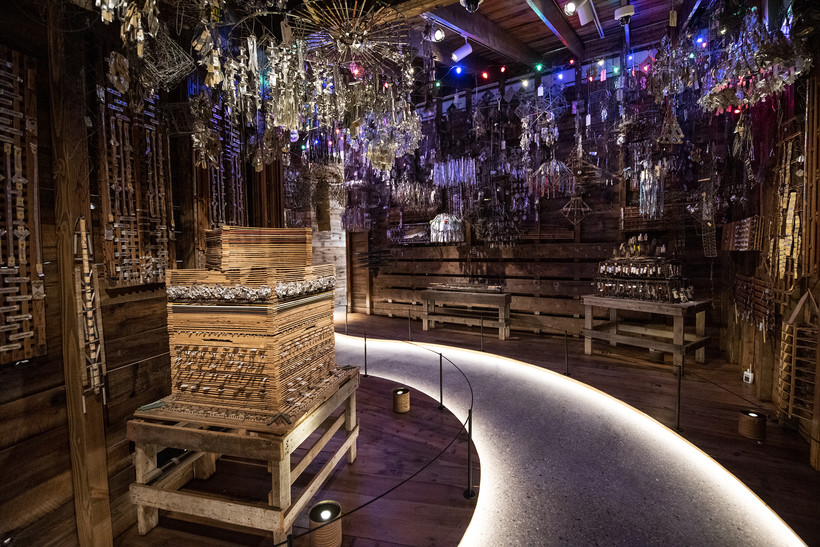 Emery Blagdon’s Healing Machine is on display at the Art Preserve in Sheboygan, Wis. Angela Major/WPR

An example is "The Healing Machine" by Emery Blagdon. The Nebraska native was fascinated by Earth’s electromagnetism, and he built hundreds of shining mobiles to harness it, Bickford said. He called them his "pretties" and constructed them with Christmas lights, wire and ribbon he bought at the local pharmacy. Many are now on display at Art Preserve.

A Museum In Motion

Like the Arts Center, it’s free to visit Art Preserve, and reservations are available online. The striking building, designed to blend into the natural landscape, doesn’t feature an exhibition space, but that doesn’t mean the works inside will be static, Bickford said.

Staff have already begun collaborating with contemporary artists to respond to the collection, and Bickford expects there will be additional opportunities for partnerships. For example, if pieces go out on loan, Art Preserve may commission an artist to fill the space. 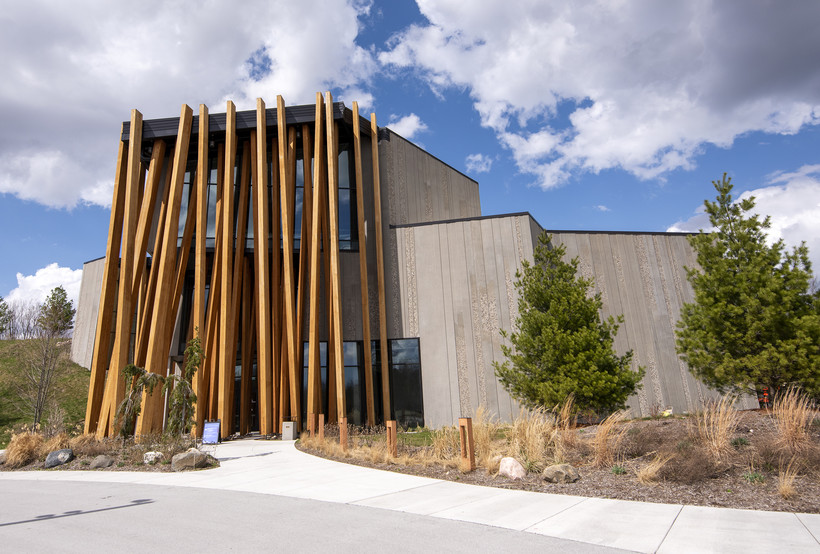 The exterior of the Art Preserve in Sheboygan, Wis. Angela Major/WPR

Of course, there are plenty of questions when it comes to creating a new type of museum, and transparency is a central tenet for Art Preserve, Bickford said. Attributions and conservation will take place out in the open. The building was designed to accommodate the Art Centers' collecting pace through 2040, she said. Meanwhile, for many of the items in its collection, there are no best practices for conservation because they were made with materials never meant to be saved.

One of the museum’s most challenging pieces is Loy Bowlin’s "Rhinestone Cowboy House," also referred to as the "Beautiful Holy Jewel Home." It took the artist years to cover his entire Mississippi home with paint, construction paper and glitter. The four original walls and the front porch are now standing inside Art Preserve. But there’s no infrastructure to support the interior pieces. It loses glitter and risks damage when it's fully assembled.

"Do we put the whole house up realizing that there's a limited life span on it and enjoy it while we can, or do we lay it all flat horizontal in a dark room and it lasts for a very long time?" Gappmayer asked. "We've sort of hit a middle road where we've put part of the house up and then the rest of the panels were in those very large flat files just adjacent to the house itself."

There’s hopes Art Preserve may be able to reconstruct the house once every 20 years, Bickford said. 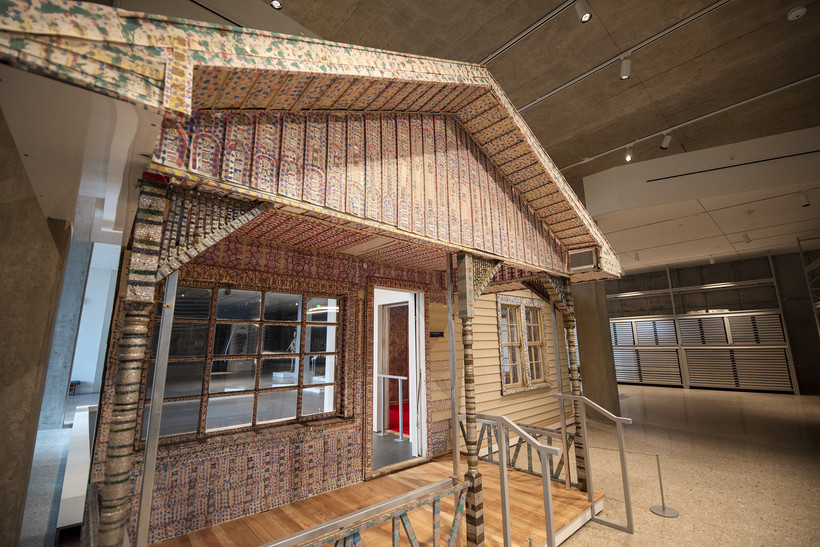 "The Beautiful Holy Jewel Home" by Loy Bowlin is on display inside the Art Preserve in Sheboygan, Wis. Angela Major/WPR

Another area of the museum that’s still in flux is the third-floor portion dedicated to the artist Dr. Charles Smith, who originally built the African American Heritage Museum and Black Veterans’ Archive on the site of his home in Aurora Township, Illinois.

His hundreds of sculptures depict key moments and important figures in Black history, including tennis player Serena Williams and musician Louis Armstrong. After he moved to Louisiana in 2005, where he continues to make art, the Kohler Foundation was able to acquire more than 200 pieces. He’s coming this fall to help the museum arrange them. 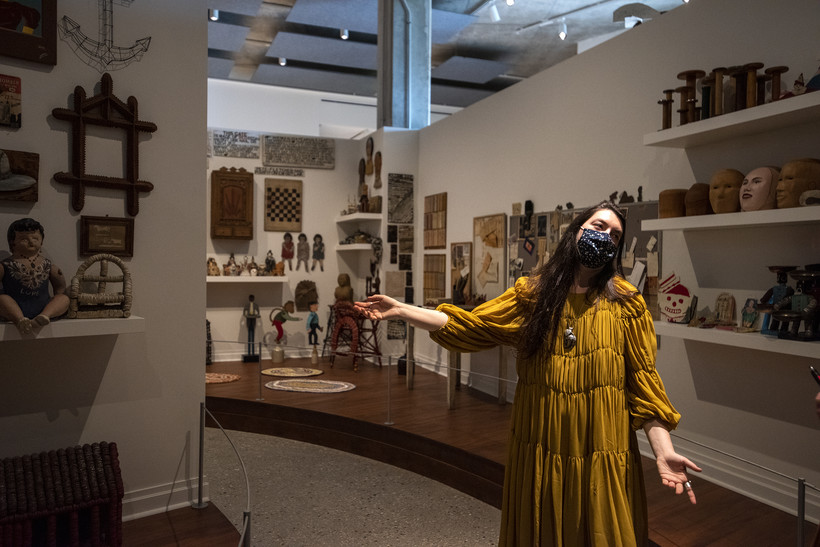 If you plan to visit, Art Preserve is open Wednesdays through Sundays, with evening hours Thursdays. It's free to visit, though reservations are required. You can book your time slot online or by phone. The museum is located at 3636 Lower Falls Road, Sheboygan.