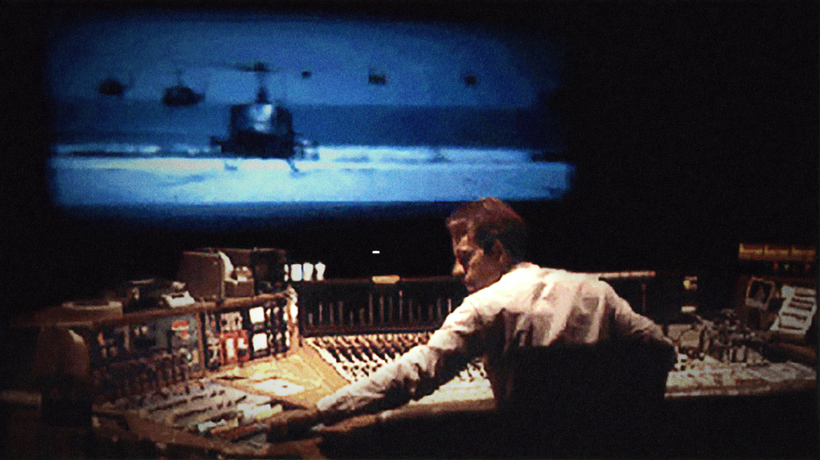 Filmmaker's Documentary Explores The Importance Of Sound In Movies

Film is a visual medium so it isn't surprising that we're always talking about our favorite scenes, the way the actors look, the camera angles, the art direction. But sound is just as important to the success of a film.

Think of the way Orson Welles whispers "Rosebud" in "Citizen Kane," or the masterful way that Walter Murch and his colleagues used sound in Francis Ford Coppola’s "Apocalypse Now."

Midge Costin is the producer and director of a documentary called "Making Waves: The Art of Cinematic Sound." The film makes a solid case for paying closer attention to the way movies sound.

"I was a sound editor for years in Hollywood. I went to film school and the last thing I thought I would do coming out of school is sound," Costin told WPR's "BETA." "Because when I was in school, I didn’t relate it to story and character. I felt like it was more like an engineering thing ... and so it kind of put me off."

But after Costin finished film school, she ended up working on a friend's film — doing sound.

"I tell my students, 'I lowered myself and took a sound job because I needed the money to finish my thesis.' And then here I am and I'm the only effects editor so I'm like, 'Oh my God, I got to set this mood and the tone. I've got to figure out like how do I even think about sound with character. And at least, I had learned in film school I would be responsible to break down those sounds. But I had just never really gone into detail in sound at school," she said.

While working on the film, Costin learned the important role sound plays in storytelling.

When her friend asked if she would like to take over work "on this kind of B-movie, maybe it was a C- or D-movie," she asked 'Who's doing the sound?' And he said, 'We don't know yet.' And I said, 'I'll take it if I can be supervising sound editor.' And my career just kind of took off," Costin recalled.

Costin spent 20 years as a feature film sound editor in Hollywood, working at every major studio. She collaborated on the soundtracks for many films, including John Waters' "Crybaby," Kenneth Branagh's "Dead Again," and Tony Scott's "Crimson Tide."

And in all of her experience, she developed a personal philosophy for what makes good sound design: "It's all about the story," Costin said.

"The director and producers really need to give the sound people enough time, give somebody a script. And then you can start thinking about it because just like the visuals, it's like you’re thinking in metaphor. How can you tell this story, reflect character, plot points and everything, and you really need to think through every frame. And we need to do the same thing with sound," she continued.

Near the beginning of her documentary "Making Waves," there's a great sound bite from director David Lynch, who is noted for the meticulous attention that he pays to the soundscapes of his films.

"People always talk about the look of a film, they don’t talk so much about the sound of a film. But it's equally important, sometimes more important," Costin said.

And she hopes that her documentary can get people to pay more attention to a film's soundtrack.

"It's so fun when I run into people now who have seen the movie and even weeks or months later, they'll say how they're watching films differently. Also, in their lives, they think about sound," she said. "One of my favorite things was coming out of the premiere in LA and there were these five law students who were standing on the sidewalk with one of our lawyers. And I said, 'How'd you like the film?' They said, 'Wow, we're just standing here talking about how the traffic is affecting us, but before we saw the movie, we never would have thought like how much it’s really affecting how we feel right now.'"

The Pioneer Of Modern Movie Sound

For Costin, one of the pioneers of modern movie sound is Walter Murch. Along with his colleagues, Mark Berger, Richard Beggs and Nat Boxer, Murch won an Oscar for Best Sound for Francis Ford Coppola’s 1979 film "Apocalypse Now."

One of the biggest challenges they faced while working on the film was that they had only worked in mono, and instead, they were working in this revolutionary new six-track, surround-sound format.

"They ended up creating what we hear now, which is 5.1 sound. So it’s left, center, right ... and they essentially created that, which now 40 years later, is the standard since the ‘80s," she said.

"That whole first scene, you think you see the jungle and it bursts into flames. And The Doors start, "The End." And you’re in this room, there's a closeup of Willard in the room and then in bed sleeping. And you think we’re in the jungle because you’re hearing the jungle soundtrack. And then you hear helicopter but what we’re seeing is that it’s in sync with the fan over his head. You hear the helicopter kind of going overhead and just as he gets to the window, and then it passes by. And then you look and he goes, 'Oh, Saigon.' And you realize, 'Oh, he's in Saigon. That was all in his head.'"

One of many sound designers featured in "Making Waves" is Ben Burtt. He's worked as a sound designer on the "Star Wars" and "Indiana Jones" movie franchises. Burtt was creating sound effects in the mid-1970s for the first "Star Wars" film. George Lucas told Burtt that he wanted real sounds. Burtt used a variety of sounds to create the distinctive sound of Hans Solo's modified YT-1300 Corellian light freighter, more commonly known as the Millennium Falcon.

"He would layer things," Costin said. "He would record a regular jet sound. Then he’d have all these other sounds and sometimes he used his own voice in things. And so he would just layer up things."