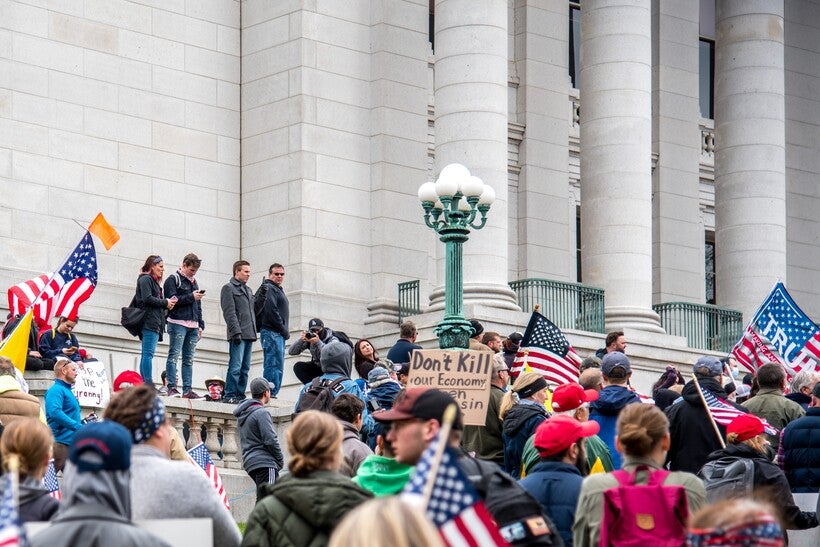 Protesters of Gov. Tony Evers’ "Safer at Home" order are seen at the Wisconsin State Capitol on April 24, 2020. Roughly 1,500 gathered to demand an end to the wide-ranging shutdown of normal life and business in Wisconsin aimed at curbing the coronavirus pandemic. Brad Horn/Wisconsin Watch

Opponents of Wisconsin's overturned "Safer at Home" order have turned their attention to the local health orders that sprung up to replace it, filing a federal lawsuit Wednesday that seeks to strike the local restrictions down.

The lawsuit was filed by a group of 17 plaintiffs including salon owners, a pastor, a protest organizer and a candidate for Congress, all of whom argue that the local orders infringe in some way on their First Amendment rights.

The Wisconsin Supreme Court struck down the statewide stay-at-home order on May 13, ruling that Gov. Tony Evers' administration exceeded its authority when it issued the order unilaterally. The court's majority wrote that the order should have been issued through the emergency rules process, which gives the Legislature, controlled by Republicans, veto power over rules.

GOP leaders, who had said for weeks that they wanted a regional approach to stay-at-home restrictions, backed away from that position after the ruling. Evers initially tried to reinstate his order but quickly backed off, leaving local governments to decide for themselves whether to replace "Safer at Home," and if so, how to go about it.

Several counties and municipalities issued their own restrictions immediately after the Supreme Court's ruling, but many backed off, citing legal concerns. A handful of local orders remain, including one in Dane County and another in Milwaukee.

"The Local Orders continue to violate, Plaintiffs' first amendment rights to freedom of assembly, freedom of speech, the right to petition the government for a redress of their grievances, and the equal protection of the laws," states the lawsuit.

The case was brought by attorney Joseph Voiland who brought a similar federal lawsuit on behalf of salon owners against the statewide stay-at-home order.

Among the plaintiffs is Madison Marie Elmer, one of the organizers of the April 24 protest against "Safer at Home" that drew more than a thousand people to the grounds of the Wisconsin Capitol. Elmer argues that the original "Safer at Home" order infringed on her First Amendment right to peaceably assemble and that the Dane County order is continuing that restriction.

Yet another stay-at-home lawsuit, this one filed with the state Supreme Court on state constitutional grounds, made a similar argument. In that case, the Wisconsin Department of Justice argued there was no restriction on political protests like the one that occurred in April. The state Supreme Court has yet to say whether it will hear the case.

Ryan Nilsestuen, chief legal counsel for the governor, said at a media briefing Thursday that the state would fight the latest federal lawsuit.

"Local public health officers have been on the front lines of dealing with the disease," said Nilsestuen. "Unfortunately they're being put at the front lines of the litigation involving these. But I'm optimistic that this lawsuit will go nowhere."

Wisconsin Attorney General Josh Kaul issued a formal opinion last week that the local orders are legal but cautioned against enforcing them with criminal penalties. Kaul's order was only advisory, meaning a court could view the issue differently.