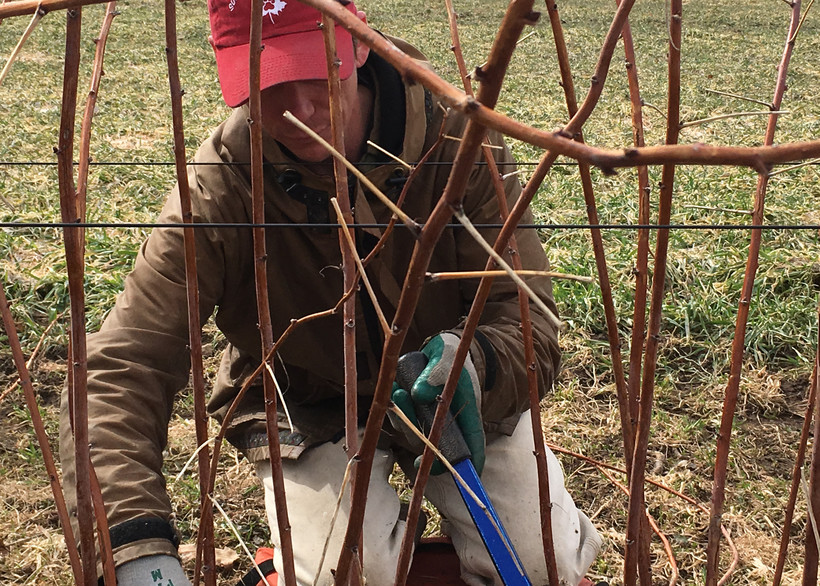 Over the last three decades, Wisconsin has lost farmland twice as fast compared to neighboring states Minnesota, Iowa and Illinois, according to the most recent national data.

Wisconsin has lost more than 2.5 million acres of farm land since 1982, according to the National Agriculture Statistics Service. Farmers may sell off land to pay down debt or fund their retirements. But some farmers are protecting their land from development to keep farming for future generations.

"There’s nothing I like doing better than pruning blueberry bushes," Dale said. "It’s like sculpture, you know?"

A first-generation fruit farmer, Dale bought the land in 1974 and added more acres over the years. The farm is among fruit orchards set back on Bayfield’s hillside overlooking Lake Superior. Dale said the stunning views and picturesque features that drew him here also subject the land to pressure from development.

Rows of berry bushes are being pruned ahead of the growing season at Highland Valley Farm in Bayfield. The farm is one of four the town protected from development. Danielle Kaeding/WPR

"Every time someone ages out or retires and there’s not someone to continue, it goes on the market," Dale said. "People pay high prices for lots here and developers are willing to subdivide it. Once it gets cut up into lots and sizes that are too small to sustain commercial agriculture, you’ve lost it."

Around 15 years ago, the Town of Bayfield set out to protect its farm land by working with a local land trust, and state and federal agencies to buy up farmers’ development rights.

Four farmers, including Dale, sold rights to develop their land to make sure it could be farmed for years to come. The town protected 193 acres in total. Those farms are now monitored annually to ensure the land remains open for agricultural use by the Bayfield Regional Conservancy.

"Between NRCS and the local organization, we pay them about 50 percent or sometimes a little bit less of the total value of their land, and then that organization is devoted to protecting that land into perpetuity for the future forever," Westad said.

Westad said farmland protection makes up 1 percent of the agency's budget in Wisconsin. Farmers who take advantage of easements can still own and operate the land, but they can’t subdivide or develop it for any other use.

Eric Carlson walked through his barn on a recent spring afternoon where he’s been storing equipment during the winter months. In the summer, the barn is busy with visitors buying locally harvested berries, honey and maple syrup. Carlson, who owns Blue Vista Farm in Bayfield, sold development rights on 38 acres of his berry farm in 2003. He said money from the sale allowed him to expand. "It helped," Carlson said. "I put that pole barn up for one and what that enabled our business to do is move all the equipment that I was storing in the barn out of the barn and then we developed our retail area in the barn."

But it can be challenging for local governments to come up with cash to match federal funds in order to buy development rights from farmers.

Alison Volk, land management section chief with the Wisconsin Department of Agriculture, Trade and Consumer Protection, said the state's Purchase of Agricultural Conservation Easements program did chip in funding at one time.

"The budget in 2011 removed further funding for the program," Volk said.

During its first and only round of funding in 2009, Volk said the state spent $5 million on the purchase of 17 conservation easements on 15 properties spanning 5,600 acres.

Now, the state works with local governments and farmers under its Farmland Preservation Program to set up agreements to keep land in farming in exchange for an income tax credit. The 15-year contracts don’t permanently protect land from development like conservation easements. But around 2.5 million acres has been preserved for farming through the program, Volk said.

Bayfield’s Dale said protecting the area’s fruit orchards has not only benefited farmers, but the entire community.

"There’s such an ambience to this kind of farming that is appealing to people and it creates an Apple Festival and it creates a berry-picking season and all of this that goes with it," Dale said. "...To look out over an apple orchard or a berry plantation with this beautiful forested valley background or a view of the lake, I mean, that’s why people come here."

Dale said his two sons and daughter, along with visitors, will now be able to enjoy the region’s heritage fruit farms for generations to come.