From Farm To Pint, How Will Beer Weather Climate Change?
In An Industry With Already Heavy Regulations And Tight Margins, Small Breweries Are Even More Vulnerable
Home
/
On The Table
Monday, March 2, 2020, 6:00am
By
Mary Kate McCoy
Share:

Beer holds a status like little else in Wisconsin. For generations, Wisconsin has been a leader in beer production — and as palates have gravitated toward craft beers in the last decade, craft breweries have exploded in number. Craft breweries across the state have satisfied a desire for local products and community connection, but as climate change becomes a growing threat to a stable supply chain, their size leaves them more vulnerable than their larger counterparts. In this series, WPR is exploring how the state can adapt to and mitigate the affect climate change is having on some of Wisconsin’s most iconic foods.

Whether it’s a refreshing pilsner, a hoppy IPA or a rich stout, Wisconsinites’ love for beer is well documented.

For generations, it’s been a cultural and economic touchstone of the state, and as tastes have shifted to favor the bigger, bolder, more unique beers, small craft breweries across the state have experienced a cultural renaissance that’s rare in an era of consolidation and bigger is better attitudes.

But the industry relies on a stable supply of quality barley and hops and a generous supply of good water to brew a consistent product. As the planet becomes a warmer, more extreme place, making the same beer consumers have come to expect will likely become even more challenging.

Brewers have become more efficient in water and energy use over time, but simply put, the size of a brewery can be a key factor in whether a brewery can afford to invest in efficient equipment.

And with the increasing threat of climate change on the supply chain and additional environmental regulations likely to be looming, questions have bubbled to the surface on whether microbreweries will be able to compete with their larger counterparts.

A decade ago, Wisconsin was home to just more than 70 craft breweries.

By 2018, that number nearly tripled to 190 craft breweries that generate $2.3 billion in economic impact and more than 1 million barrels of beer each year, according to the Brewers Association.

Whether you think the craft beer market is saturated or not, there’s no denying craft breweries are changing the way Americans consume beer.

In 2012, craft breweries accounted for 6.5 percent of the overall beer market share by volume, in 2018 that share jumped to 13.2 percent.

Overall beer consumption dropped by 1 percent in 2018. While craft beer growth has slowed in the last few years, 2018 still saw sales grow by 4 percent. At the same time, the country’s best-selling beers — Bud Light, Coors Light — have experienced years of steep declines, though they still sell an enormous amount of beer.

Competition is strong among microbreweries, and smaller brewers have less economic leverage than their larger competitors.

When it comes to climate change and what it means for their supply chain, they’re in a tremulous spot compared to the beer giants who generally have the extra income to develop risk management strategies.

"It’s a very hard business," said Isaac Showaki, CEO and founder of Octopi Brewing, located in Waunakee and a beverage co-packer that makes beverages that range from beer to boozy tea and hard seltzers for roughly 20 clients.

"There's not a lot of money involved because it’s a volume business, so every time you squeeze a little more of the margin, it’s going to have a significant effect on breweries," he said.

In an industry that already faces heavy federal regulations to make it from the farm to the pint, the possibility of even more regulations will hit small brewers the hardest, said Trey Malone, an assistant professor in the Department of Agricultural, Food and Resource Economics at Michigan State University.

Industry-wide, both small and large breweries are adopting sustainability goals to be more efficient and environmentally conscious as heat, drought and water concerns threaten their stability and bottom line, though overall progress is slow.

Molson Coors, the second-largest brewery in the United States, for example, has sustainability goals to reduce water use in their agricultural chain by 10 percent and sustainably source all of their barley by 2025.

Kim Marotta, director of sustainability at Molson Coors, said climate change has the potential to impact every part of the business, not just on the operational side, but also the regulatory side.

"How do we look at future regulation ... how do we adapt our practices to meet those regulatory needs?" she said. "And really, it's about managing long-term risk, and climate change happens to be one of those long-term risks."

Showaki echoes those thoughts and said what is better for the environment is often good for his business.

"If I use less water, if I use less electricity, I use less steam, etc., it's gonna be reflected on my cost, which is awesome," he said. "That's a good incentive for anybody to go for."

Inside Octopi's 50,000-square-foot facility — the fifth-largest brewery in Wisconsin — Showaki said for every piece of equipment, he could upgrade it 10 times.

Take the boiler the brewery started with. The older, more traditional model was powerful, but took up to three hours to reach the needed temperature pressure. He recently upgraded to a steam generator which can do the same in under 15 minutes.

"It uses less energy and less gas, and we can do things much faster," Showaki said. "But there was a significant price increase."

"Water is the most important thing for us, like 99 percent of what we do is water," said Isaac Showaki, CEO and founder of Octopi Brewing in Waunakee, Wis.

Then there’s water, which Showaki said is everything.

"Water is the most important thing for us, like 99 percent of what we do is water," Showaki said.

Beer is 90 to 95 percent water — from the barley fields to the brewing and cleaning process, access to good water is crucial for production and the quality of the beer.

In Wisconsin, where there is an ample supply of groundwater and the Great Lakes, that's an advantage, said Tracy Boyer, professor and environmental economist at the University of Wisconsin-Milwaukee School of Freshwater Sciences. 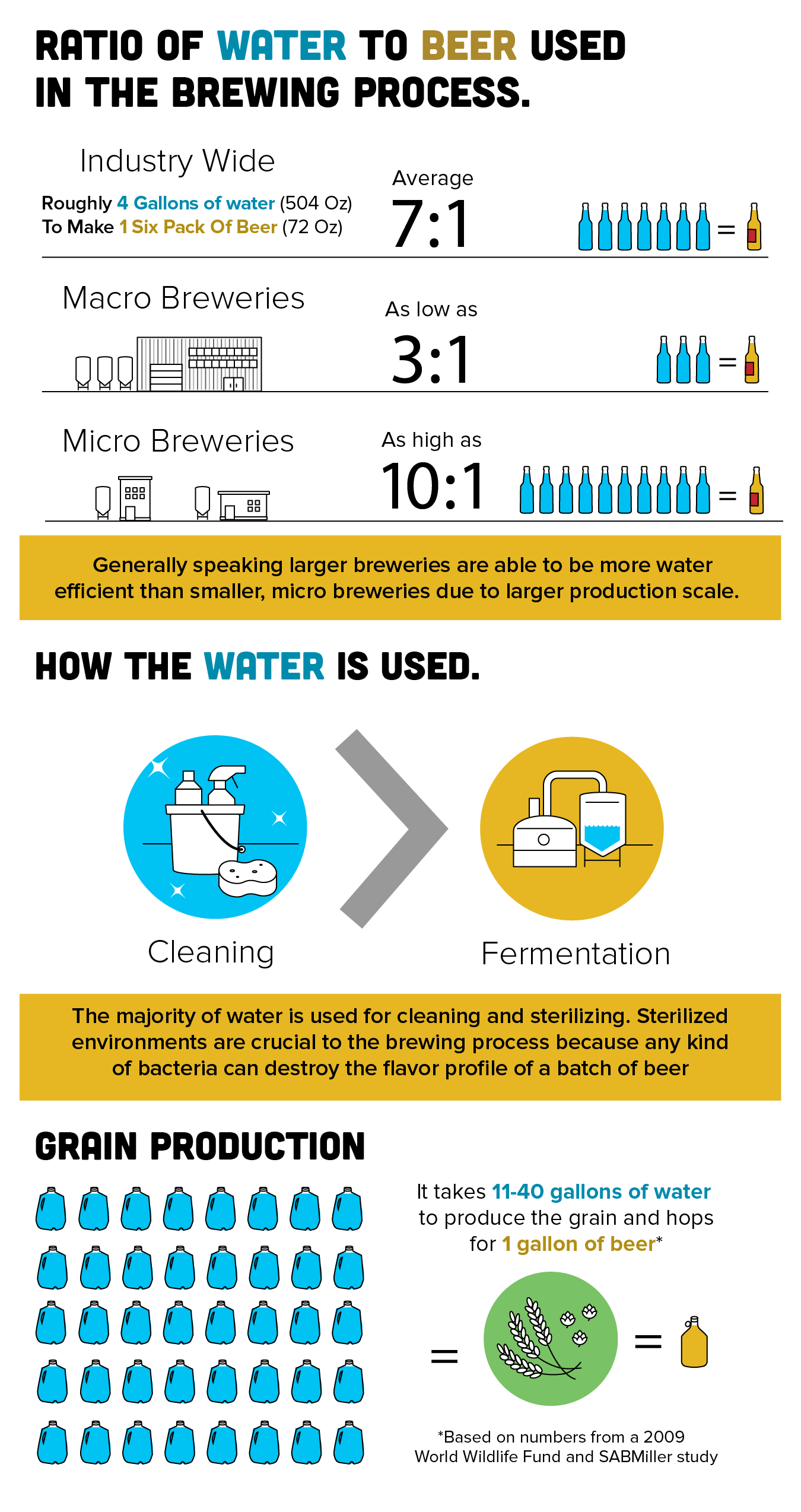 "That's really a bonus to Wisconsin," she said. "Where water may become more expensive because of scarcity, to large manufacturers, you could see them switching to produce more of that beer somewhere else, like Wisconsin."

The amount of water it takes to brew beer isn't negligible.

On average, brewers need 7 gallons of water to brew 1 gallon of beer. But economies of scale play a huge role. Macrobreweries can typically get by with less water than microbreweries (a brewery that produces less than 15,000 barrels of beer per year) because of more efficient brewing equipment.

Large brewers like Molson Coors are closer to a 3-to-1 ratio, whereas less efficient breweries can be as high as 10-to-1.

Yet when agricultural water use is included in the mix, water use skyrockets. A 2009 study from the World Wildlife Fund (WWF) estimates the ratio rises to a range of 11 to 40 gallons of water to 1 gallon of beer, depending on whether the barley, wheat and hops were irrigated or dry-land farmed.

The researchers expect there have been some improvements in water efficiency in the last decade, but the overall picture is roughly the same, according to the WWF.

In perspective, beer isn't an outlier.

Soda, hard alcohol, wine and other popular beverages use similar, or even greater, amounts of water.

"Where water may become more expensive because of scarcity, to large manufacturers, you could see them switching to produce more of that beer somewhere else, like Wisconsin," said Tracy Boyer, of UW-Milwaukee's School of Freshwater Sciences.

While water scarcity isn't an issue in Wisconsin, it is in other parts of the country where the crops to brew beer are grown.

A recent study suggests climate change impacts like higher temperatures and drought are likely to affect the crops — mainly barley, hops and wheat — and could drive up the cost of beer.

But Malone, of Michigan State University, said agriculture is very good at adapting.

It's the quality of the crop — particularly in making craft beer and a consistent product — that will be more pressing going forward.

"If you're trying to make a consistent beer every time and weather variability continues to increase, it's going to be increasingly difficult to make the same Budweiser every time, or the same Miller High Life every time," he said.

Showaki, of Octopi Brewing, said he’s experienced disruptions to his supply chain in the past. And while supply chain is on his mind — it doesn’t compare to water.

Already, the water in south central Wisconsin is difficult to brew with, said Showaki, who needs to treat the hard water for minerals like calcium and magnesium through a carbon filter and a reverse osmosis water system before brewing for the style of beer he wants.

Beer style and water profiles are closely connected — lighter styles like pilsners or lagers are more sensitive to hard water than darker, heavier beers like porters and stouts.

"Once it's all kind of stripped out, then we can rebuild the water that we need," Showaki said.

But when it comes to water and brewing, quantity and quality isn’t the only concern.

From an environmental perspective, the bigger issue for Wisconsin brewers is the wastewater leftover from the brewing process, Boyer of UW-Milwaukee, said.

Wastewater from brewing — which contains solids, sugars and acids — has a high oxygen demand and needs heavy treatment before it can be released into waterways.

On average, 80 percent of the wastewater discharge from craft breweries ends up in the local supply, she said.

The solids can be used as fertilizer, or to sell as feed for cattle, Showaki said. But again, economies of scale matter. Brewers have to produce enough for a farmer to be interested in buying it.

"There's a big change coming," he said. "Whether Wisconsin does it now, they're gonna do it in the future. So we said, 'Let's just do the investment upfront instead of having to rejig everything we have like five years down the line when they're actually enforcing these rules.'"

Next on Showaki’s mind is a solar-powered battery to help power his facility, which he hopes to install next year. But with a roughly $1 million price tag, outside help to pay for it is essential.

Showaki has relied on state and federal grants in the past to help fund projects that are more energy and water efficient. While he says opportunities are growing, it's moving slow.

"I don't want to make it sound like it's all about the bottom line, but it kind of is because the less money you have, the less stuff you can do with your company," he said.

This is where the scale and size of the brewery really comes into play. The larger the brewery, the more opportunity they have to embrace practices that work for both their business and the environment.

As the industry sees greater impacts from climate change, their ability to embrace consumer demand for local products will become more challenging. An outcome that will affect both the breweries themselves and the communities they're in.

"It's a great place for the community to get involved," he said. "We're not just making beer, we want to be part of where we are."