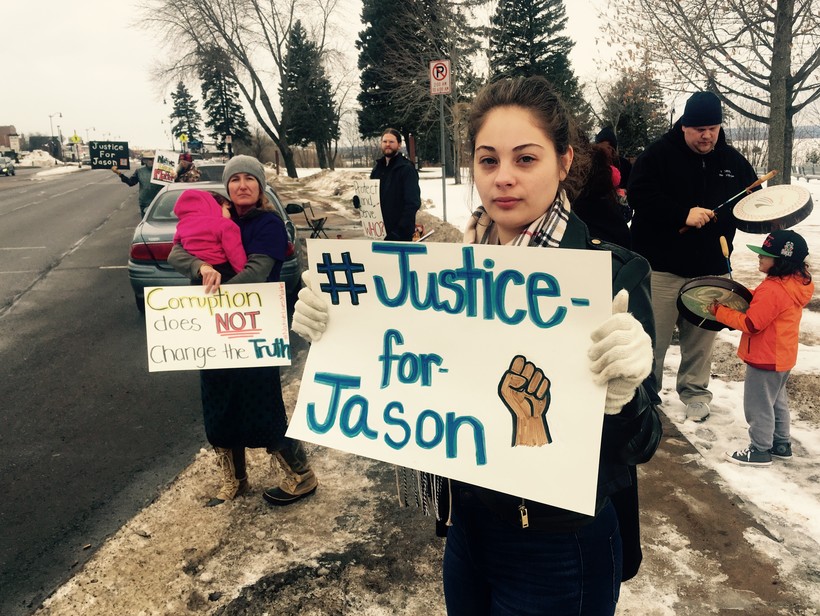 Danielle Delgado, center, Jason Pero's cousin, holds a sign during a protest of a prosecutor's decision not to file charges against the Ashland County sheriff's deputy who killed her cousin.

'Nobody Had To Die,' Says Cousin Of Jason
By Danielle Kaeding
Share:

"Nobody had to die."

Those are the words Jason Pero's cousin said Saturday while protesting a special prosecutor's decision not to file charges against an officer who shot and killed the 14-year-old on the Lake Superior Chippewa reservation in November.

Around two dozen people protested the decision to not criminally charge Ashland County Sheriff’s Deputy Brock Mrdjenovich who shot and killed Jason, a Bad River teen, on Nov. 8. They lined U.S. Highway 2 in Ashland on Saturday, holding signs that read "Justice for Jason."

St. Croix County District Attorney Mike Nieskes wrote in a letter Friday to state and county law enforcement, concluding the deputy’s actions were "justified for the circumstances he found himself in and that there is no criminal liability for the death of the juvenile."

Jason’s family members, including his older cousin Curtis Gauthier, said Saturday they don't agree that there is any justification for shooting Jason. "There had to have been other avenues to take to resolve the situation," Gauthier said. "Nobody had to die."

"He had a taser on him. He had pepper spray. He could’ve called for backup," she said of Mrdjenovich. "He was so quick to bring the gun out and shoot. I don’t believe that’s right."

Findings from the Wisconsin Division of Criminal Investigations confirmed those assertions. The case reports also detailed that investigators had found a note in Jason’s room that read, "I love you all. I'm sorry sty happy love Jason."

To Bad River Tribal Chairman Mike Wiggins, the report seemed to focus more on Jason rather than Mrdjenovich. Wiggins took issue with the references to the presence of fentanyl in the teen's system, noting he felt there should have been more analysis of the deputy's response to the 911 call.

"Those kinds of things on the officer action side of the coin aren’t given the scrutiny and the analysis compared to the way they’re putting Jason out there," Wiggins said. "What’s happening in our community is happening all over the nation. It’s not a phenomena. It’s not a trend. It’s a one-time incident. It’s a subjective, life-changing thing for every community and every family that’s got to experience it. It’s got to stop. I’ll be the first to say it. There are deadly force scenarios that occur in law enforcement contacts. This doesn’t rise to this type of scenario in my mind."

The teen's death has ignited tension between the Bad River tribe, Ashland County law enforcement and surrounding community. The tribe is reviewing its law enforcement agreement with the county, and Wiggins said he'd like to see data on how tribal members are treated by law enforcement. He said that data would inform how the tribe and law enforcement could better work together.

"Whether that’s community policing, cultural sensitivity training or replacing personnel. There’s a whole list of things that we have to step up and get aggressive on in terms of our relationship with the sheriff and Ashland County Sheriff’s Department." Wiggins said he wanted to see the U.S. Department of Justice honor the tribe’s request for an independent review of the incident.

In the case reports, Mrdjenovich told investigators he feared for his life at the time of the shooting.

Ashland County Sheriff Mick Brennan declined to comment on the findings, but his office released a statement.

"We are dedicated to rebuilding and restoring trust and a working relationship with the community at all levels through continued community policing, officer education and training, and proactive involvement with all citizens of Ashland County," read a portion of the statement.

Bad River tribal members hoped to see more education, training and trust-building as the result of the shooting.

"Getting together, understanding of historical traumas, things of that nature," said Gauthier. "An understanding of the hurts and abuses everybody in both communities carry, and just to work together to resolve to grow and heal from incidences like this."

Ashland Schools Ojibwe language instructor Sandra Gokee, who was placed on paid leave by the district last fall as a result of Facebook comments about the shooting, said the surrounding community should be smart with any anger they’re feeling over Jason’s death.

"We aren’t trying to hurt anybody," she said. "We don’t want the same thing that was done to Jason to be done to this cop either. We don’t want harm for anybody."