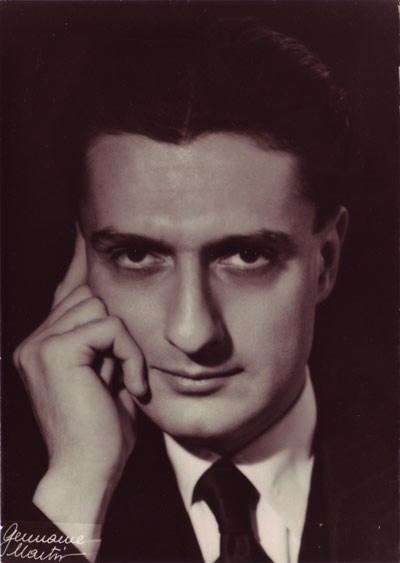 The thirty-three-year-old pianist was as brilliant as ever. He treated his audience in Besançon to unequaled performances of Bach’s B-flat major Partita, Mozart’s Sonata in A minor, Schubert’s G- flat major and E-flat major Impromptus, and thirteen of Chopin’s fourteen Waltzes.

He left out the second Chopin waltz because he was too exhausted to play it. He substituted a transcription of Bach’s “Jesu, Joy of Man’s Desiring.” The young pianist and his audience were aware that this would likely be his last concert.

His name was Dinu Lipatti, and he had been thrilling listeners for thirty years. Music was in his blood. The Romanian virtuoso’s mother was a pianist and his father a violinist. His godfather was the great composer Georges Enesco. The disruption of World War I postponed his baptism until he was four years old. For the occasion he played a recital on both the piano and the violin.

At the age of seventeen, he competed in the 1934 Vienna International Piano Competition, which included the distinguished pianist Alfred Cortot as one of the judges. Cortot deemed him the winner, and when Lipatti came in second, Cortot resigned from the jury in protest.

Lipatti went to Paris to study with Cortot and other world-renowned figures of the day—conductor Charles Munch, composer Paul Dukas, and celebrated music educator Nadia Boulanger, with whom he made a recording of Brahms waltzes.

World War II interrupted his French idyll, but he continued to give concerts, including some in German-occupied areas, before fleeing to Romania in 1943 and making his way to Switzerland with his wife.

He was teaching at the conservatory in Geneva when the first signs of illness appeared, but three or four years passed before doctors were able to diagnose it as Hodgkin’s disease.

Although he had just three months to live, when Dinu Lipatti gave his final concert on September 16, 1950, it was such a show of virtuosity that it secured his place as one of the great pianists of the twentieth century.