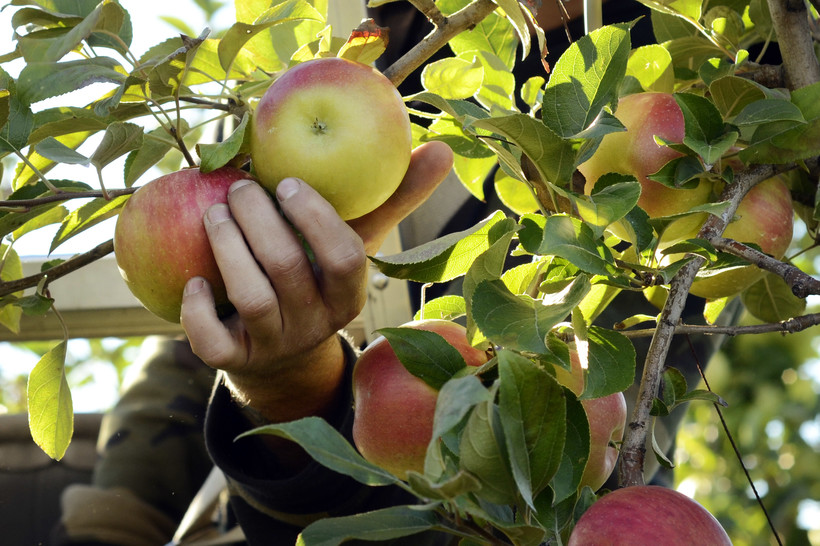 Dry conditions during the apple growing season in western Wisconsin didn't turn into a problem at Laura Leffel's orchard in Eau Claire.

In fact, Leffel Roots Apple Orchard produced enough crop that staff was hand-thinning trees for better nutrient flow among the apples left on the branches before the orchard opened to the public a week early for the fall season.

"We have a nice crop," Leffel said of the nine-acre orchard that grows about 20 apple varieties, also giving credit to the typical spring conditions that didn't subject the apples to a late frost, such as the kind that plagued the 2016 season.

Farther south, a different story emerged of insect-burdened trees and soggy soil that demanded action from growers hoping to protect a quality product for this year's market.

Griffith's orchard, which grows about 87 varieties of apples on about eight acres, said in addition to a season burdened by insects and fungi, heavy rains in late August are showing up in the form of cosmetic flaws on some apples, for example fruit cracking from water being taken up rapidly by trees.

"This has been a very challenging year," he said.

At Bill Roethle's Hillside Apples orchard about 20 miles east of Green Bay, "timely" rains in early August saturated the ground and are helping the apples grow bigger as harvest gets underway. In contrast from last year, when the growing season was wet, Roethle said there's little apple scab — caused by a fungus that produces lesions on the exterior of the fruits — and the apples are in good shape.

"The crop does look good this year," he said from Hillside, which grows 30 varieties of apples on about 40 acres.

A little farther to the west, Mike Graham, owner of Bearfruit Apple Company in Wausau, said the good growing season has yielded above-average quality apples. His yield is about average, with honey crisps producing a little less.

"I've had good years and bad years," he said of his orchard consisting of 100 trees growing seven varieties. "This is a good year."

Elsewhere, heavy rains such as those that brought historic levels of precipitation to southern Wisconsin, saturated the ground to the point that some trees needed assistance staying upright.

"We're having to stake some of them," said Jennifer Leverenz of Alpine Ridge Orchard in Brooklyn. "They want to tip over because the ground is so wet. That's our biggest issue."

Griffith, of Door Creek Orchard, had to use stakes to help some of the heavy fruit-bearing plants that were tilted outward after being drenched by the rain as well.

But he wasn't condemning the rain entirely, noting it was a welcome sight for young trees, which Griffith said growers worry about in drought seasons.

"Those trees loved this year," he said. "The growth on some of those has been phenomenal." Christelle Guédot, an assistant professor of entomology at the University of Wisconsin-Madison, said the stink bugs, first seen in Wisconsin in 2011, tend to build up their population slowly. A noticeable increase in their population has been identified this year, she said.

"The numbers have really ramped up this year," she said. "That's how they move."

Hiding in homes in the wintertime, these bugs make an appearance in spring and begin feeding on between 200 and 300 hosts, with apple trees among them, Guédot said.

Griffith, whose orchard is part of a university study conducted out of Guédot's department, has seen more of the bugs in his orchard this year. He first noticed the rise during last year's season.

While he has found success protecting the orchard from other pests — for example using pheromone dispensers to disrupt codling moths — the stink bugs could prove more problematic because they make an appearance during harvest, he said.

Brown marmorated stink bugs are listed as a nuisance in Dane, Rock, Waukesha, Milwaukee, Outagamie and Winnegabo counties, according to the Wisconsin Pest Bulletin from the state Department of Agriculture, Trade and Consumer Protection.

Another adversary to apple growers is the Japanese beetle, an invasive pest that feeds on the leaves of apple trees, often causing so much damage that the trees can't recover and subsequently die.

A particular concern for Leverenz, of Alpine Ridge Orchard in Dane County, these beetles are extending their stay.

"They're normally done by the end of July or into August — definitely by the time we open," she said. "They're still here."

Surprised by the reports of more Japanese beetles being seen in the orchards, Guédot said the beetles have been shown to live longer in cooler temperatures, and postulated that Madison's temperate summer could be responsible for these beetles' longevity.

Apple growers in central and northern Wisconsin likely won't have to deal with the Japanese beetle, which hasn't been seen in those areas, and probably never will be, Guédot said, noting the beetles have had since the early 1990s, when they were first spotted in the state to make their way north. The Honeycrisp apple variety still ranks high on the list of apple fans who favor its sweet and firm texture, the apple growers said.

"Honeycrisp is still king," Roethle said, pointing to Zestar as another favorite among apple pickers and buyers.

Leffel in Eau Claire and Griffith from Cottage Grove also claimed Honeycrisp as the crowd favorite.

Griffith said Cortlands are probably the second-most sought after, calling it a "versatile" variety and one that bodes well for both eating fresh and for cooking. Crowds also likes Zestar as an early apple, but he said that variety won't keep well into fall and winter. Sweet, sharp and refreshing, the Empire apple is a favorite that can be picked in early October, near the end of the harvest season.

Heirloom varieties like the Pink Pearl are enjoyed among Griffith's patrons, who he said enjoy the crispness and juiciness of the apples whose flesh is a rosy pink.

Looking ahead, Roethle is looking forward to growing a new variety called Ginger Gold, which he likened to a golden delicious that's a bit more sweet than it is tart. It'll take the trees a few years before the fruit is ready for market.

Editor's Note: A WPR manager has a relationship with a source cited in this story, but wasn't involved in the assigning or editing of this story.