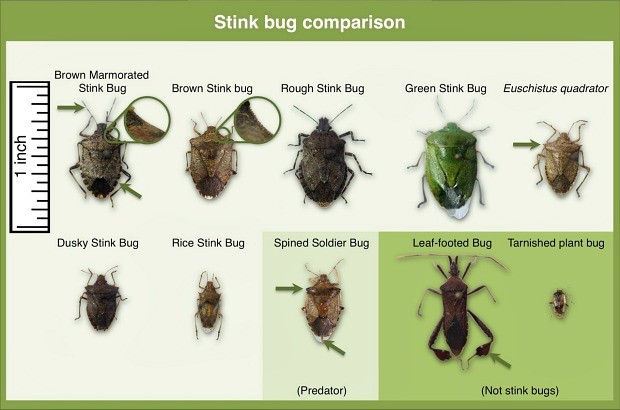 As an invasive species in North America, the brown marmorated stink bug is the subject of ongoing scientific study, particularly by researchers in regions the species colonized.

Since the bug first arrived in the U.S. in the late 1990s, agricultural researchers in affected states have monitored its spread and impact on agriculture. Organizations that have worked to track the bug over much of the time since its introduction include Penn State Cooperative Extension and the New Jersey Agricultural Experiment Station, which is affiliated with Rutgers University. There is also Stop BMSB, a collaborative research effort among multiple institutions, primarily those in affected states around the eastern U.S. Launched in 2011 and supported by the U.S. Department of Agriculture's Specialty Crops Research Initiative, the project investigates approaches for managing the insect and protecting the crops it targets. Stop BMSB also produces the "Tracking the Brown Marmorated Stink Bug" video series, which covers monitoring and control methods for the insect, as well as information about its history and affect on crops.

Thanks to the research that's taken place since the bug first hit Pennsylvania, Wisconsin growers will be better prepared to deal with it when and if it becomes a pest in the state.

Christelle Guédot, a University of Wisconsin-Extension fruit crop specialist and UW-Madison entomology professor, estimates at least 50 researchers in the U.S. alone are studying the brown marmorated stink bug. Those efforts have yielded monitoring techniques and insight into which pesticides and management techniques keep the pest at bay.

Researchers tracking the brown marmorated stink bug can use tools like pheromone and blacklight traps to capture and count the insect. People can also capture the bugs by striking a woody plant limb (typically with a rubber bat) to startle the bugs that then fall into a container, or with sweep nets.

Given concerns among researchers that the brown marmorated stink bug may emerge as an agricultural nuisance in Wisconsin in 2016, several organizations are assembling a contingency plan for the growing season. UW-Extension, the UW-Madison Entomology Department, the Wisconsin Department of Agriculture, Trade and Consumer Protection, and the Integrated Pest Management Institute of North America are collaborating on an effort to detect the bugs at 30 sites around the state.

"Now is the time to really start monitoring in those agricultural crops and see what’s going on," Guédot said at the Wisconsin Fruit and Vegetable Growers Conference in January 2016.

"If there's going to be a year when it's going to start, it's going to be this coming year," said Guédot. "So we all think — IPM Institute, DATCP and myself — think that we need to work together to really go and check in apple orchards….even if it's in very low numbers, so we can alert (growers)."

At the same time, Guédot pointed out that Wisconsinites should be mindful that many bugs resemble the brown marmorated stink bug and be sure they know what they’re looking at before overreacting.

"It's not necessarily easy for an untrained eye, or somebody panicking," she said.

To help track the brown marmorated stink bug in Wisconsin, residents can send an email to Guédot or P.J. Liesch, director of the UW Insect Diagnostic Lab, who share the information with each other and DATCP’s pest survey program. People who find specimens can also send them to the Insect Diagnostic Lab. The Stop BMSB project is also collecting reports on a national basis, through the New Jersey Agricultural Experiment Station.