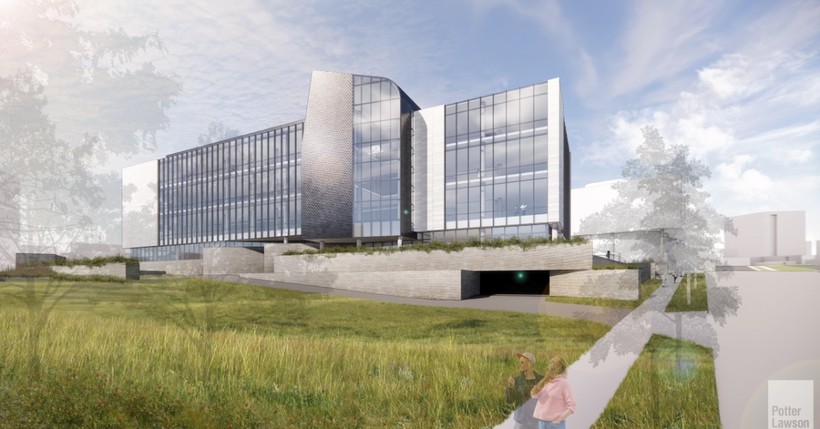 An image of Exact Sciences' planned Research and Development Center of Excellence, which is part of a $350 million expansion project at the company's Madison headquarters. Courtesy of Exact Sciences

The cancer screening and diagnostics company says the expansion will include a research and development center, laboratory, warehouse
By Hope Kirwan
Updated:
Thursday, January 13, 2022, 2:00pm
Share:

Cancer testing company Exact Sciences will be expanding their headquarters in Madison, promising to add more than 1,300 new jobs.

Exact Sciences is the maker of Cologuard, an at-home colon cancer screening test, as well as a diagnostic test used by doctors to individualize cancer treatments. The company relocated their headquarters to Madison in 2009 and currently employs around 3,500 people there.

The $350 million expansion project announced Thursday will include a research and development center and testing laboratory at the company’s west-side Madison campus.

Exact Sciences CEO Kevin Conroy said the new facilities will add a variety of jobs, from entry-level lab positions to scientists, engineers and software developers. He said the company wanted to continue expanding in Wisconsin because the community has helped them to grow.

"Madison has a great base of talented people," Conroy said. "They come to the University of Wisconsin, or they come to Madison College, and we’re able to recruit people. They love living in Madison."

The Wisconsin Economic Development Corp. will be supporting the project with $18.5 million in performance-based tax credits. The credits will be awarded if the company meets the capital investment and job creation goals by 2025.

"When you have a company like Exact Sciences decide to expand in Wisconsin, you really open up an opportunity for continuing to bring really excellent jobs to the Madison area," Hughes said. "But it also has a great impact on the state because these are high quality jobs, there are opportunities for our graduates, and it's just really exciting."

She said officials are confident the new jobs will not only retain workers in Wisconsin but attract people to move to the state. Hughes said they hope it will be a signal to other biohealth companies that Wisconsin has the workforce and resources to support new facilities.

WEDC has previously supported Exact Sciences with a 2015 contract for $9 million in tax credits. That contract required the company to invest at least $26.2 million and create 758 jobs, which the company exceeded.

Hughes said Exact Sciences will not receive any of the new $18.5 million until they reach certain spending and hiring milestones.

Earlier this week, Exact Sciences announced it purchased DNA testing laboratory PreventionGenetics in Marshfield for $190 million as part of a new push into hereditary cancer testing.

Conroy said the Madison expansion is not related to that acquisition and the Marshfield lab’s operations will continue to support the staff there.

He said Exact Sciences now has 10 locations around the world and expects to achieve $2 billion in revenue this year.