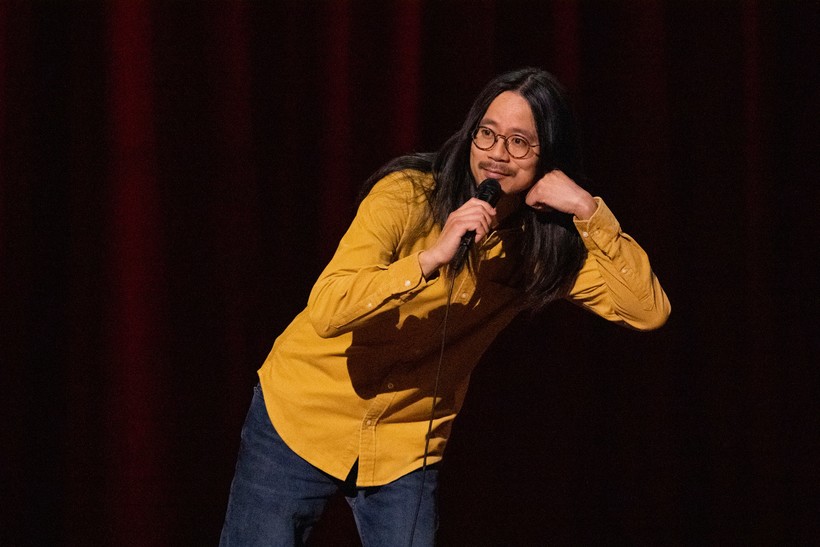 An evolved and authentic Sheng Wang finds the funny in the Netflix comedy special, 'Sweet and Juicy'

Wang's laid-back delivery and absurd, surreal jokes generate enough laughs to power a Costco, which, fittingly, is where he buys pants now.
By Doug Gordon
Share:

Editor's note: The final video featuring Ali Wong and Sheng Wang contains language that may not be appropriate for some audiences.

Comedian Sheng Wang shows off his comedy chops with some very funny jokes and a personable, relatable approach in his debut Netflix comedy special, "Sweet and Juicy."

Whether he's talking about buying Kirkland pants at Costco, his constant efforts to beat the system, or why he might be better off as a train, the jokes and the laughs just keep on coming.

In his Costco bit, Wang takes aim at the humble owner of the Kirkland pant.

"When you buy pants at Costco, that’s when you don’t care anymore," he said in the special. "That’s when we let go of our egos and begin our spiritual journey."

"You hear people say stuff and go, 'I’m not concerned about other people’s opinions; I don’t care about what they think.' That is just talk. Until you back it up with a Costco pants purchase."

We here at "BETA" are big Costco fans, and we affectionately refer to it as Keith Kirkland, as if Keith Kirkland is the founder of the big-box retail store. But he isn't. Jim Sinegal and Jeffrey H. Brotman are the co-founders.

So that got us wondering if Wang making jokes about Costco pants is a clever trick to get Keith Kirkland to start stocking a line of Sheng Wang Action Slacks, perhaps.

"I would be honored to collaborate with Costco. Yeah, that would be huge. I think that would be a bigger achievement for my parents to see than the special itself, maybe," he said.

Sheng was born in Taiwan, but he's lived most of his life in the United States.

"My parents immigrated to the states when I was like 2 or 3," Sheng told WPR's "BETA." "So it's not like I really understood what was going on. I mean, I think the culture shock just might be being a human being on this earth and also just being a child of immigrants in America."

He has great insight into what makes Americans tick and, more importantly, what makes them laugh, and he’s been doing that with his stand-up for 20 years.

In that time he has developed his own, authentic voice, which he called the goal of the craft.

"Do comedy that is so original to you and so unique to yourself that no one else can copy or steal your jokes. And so that you are on stage performing and sharing what is true to your heart and having the most fun doing it."

Wang said he’s getting close to his authentic voice but recognizes that at least for now he’s always changing, evolving and learning.

"And I think that'll change as I change," he said.

Wang said that when he was starting out, he was a huge fan of the late, great comedian, Mitch Hedberg, whose deadpan delivery and wit captured audiences.

"So many comics adopted his sound and his feel and his vibe," Wang explained. "And when you're starting out, it's very common for people, artists or performers or writers to emulate the folks that inspire them. But at some point, you want to come into your own, find your voice and your unique way of doing it."

Wang said people have commented on his physical comedy — the use of his body to tell a joke. Wang said it’s interesting to hear that, because he never thought of himself that way.

"I think because it's on TV, people can see it," he said. "That element is more pronounced because I feel like my physicality is pretty minimal and sparingly used."

Wang’s special premiered on Netflix in early September. Fellow comedian Ali Wong directed and produced the hour-long special, but the two go back much further.

"We both started comedy in San Francisco, around the same time, and we've been kind of in the struggle together for a long time now. And so I was just grateful to work with her," Wang said.

Calling Wong a "homie," Wang said she helped him get over worrying about making the special, well, special.

When comedians have a special opportunity to make a special, Wang said, "they suddenly want to change what they're doing and make it something different."

Wong told him not to worry about doing anything different and just to make his jokes as tight as possible so that they can be the best version of themselves. That was also Wong's approach with visuals.

"We weren't trying to be super experimental. We wanted to shoot a very traditional looking special, just a beautiful red curtain, some lights and a stage and not do anything too radical."

As for the future, Wang has no big plans. Not at the moment, anyway.

"I think my main goal is to continue writing jokes and try to figure out what another hour will look like," he said. "That's really it. Just be healthy, be a good person, work on the craft and try to live life."