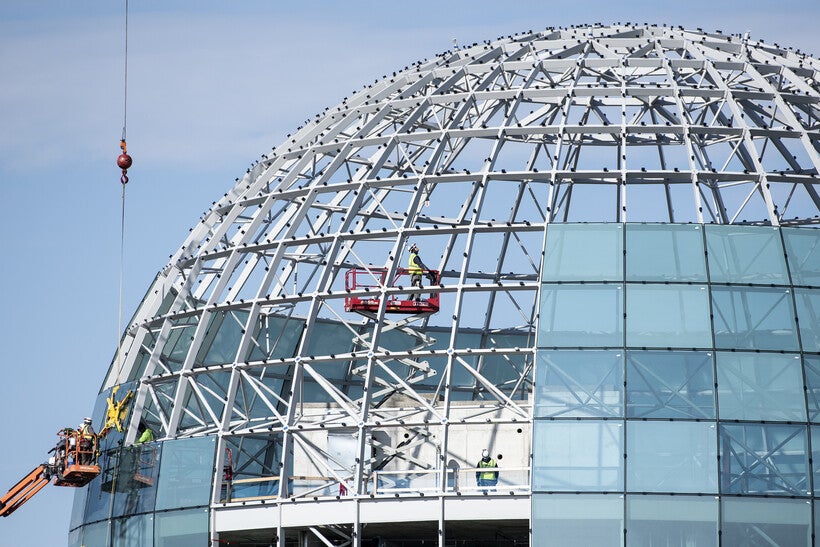 Foxconn Technology Group has reached a new deal, with reduced tax incentives, for its scaled back project in Racine County, Gov. Tony Evers and the company announced Monday.

The Wisconsin Economic Development Corp. is scheduled to approve the new deal at its meeting Tuesday. Further details on the agreement were not immediately released.

The state and Foxconn have been in negotiations for more than a year.

Wisconsin has denied the technology manufacturing giant any consideration of tax credits because there's no activity in Mount Pleasant resembling any of the detailed production included in the original $3 billion contract with the state.

In a statement, Evers said it has been his goal to "find an agreement that works for Wisconsin taxpayers while providing the support Foxconn needs to be successful here in our state."

"I’m incredibly grateful for all the folks at the WEDC and Foxconn for their help working to find a solution that works for everyone, and I look forward to the amendment being approved by the WEDC Board of Directors," Evers said.

Assembly Minority Leader Gordon Hintz, D-Oshkosh, is a member of the WEDC board. He said he has seen the details of the deal, but they won't be released publicly until Tuesday. Hintz said he is encouraged by the agreement, but does have questions he hopes will be answered during the Tuesday meeting.

"Any contract would be much different than what was done in 2017," Hintz said. "Knowing where Gov. Evers and the team at WEDC was coming from in terms of closing the open-endedness of putting taxpayers on the hook for something that was unachievable. I think this achieves the goal of protection for taxpayers and meaningful job creation for the state."

In a statement, Jay Lee, Foxconn board vice chair, said the company began formal negotiations with the state in response to "unforeseen economic conditions and a desire to lower taxpayer liability in exchange for the flexibility to pursue business opportunities (that) meet market demand."

The original deal with the Taiwanese company was made in 2017 by former Gov. Scott Walker and based on Foxconn’s promise to build a massive $10 billion flat screen panel manufacturing facility in Mount Pleasant. Former President Donald Trump described the project as the "eighth wonder of the world."

At the local and regional levels, Mount Pleasant and Racine County created a tax-increment financing district in 2017 to pay for a $764 million investment to support the project. The public investment was later increased to $911 million.

A joint statement released by Mount Pleasant and Racine County said they were "pleased the state and Foxconn have reached an agreement and look forward to continued progress on the campus in Racine County."

Representatives from both municipalities didn't respond to questions about whether the new deal could mean changes to the local tax breaks Foxconn was getting.

Foxconn has scaled back the original project several times. At this point, Foxconn executives say they could begin manufacturing electric vehicles for California-based start-up Fisker Inc. in Mount Pleasant. A formal deal has not been inked.

Since 2017, Foxconn has also failed to follow through on several promises made across the state, including so-called innovation centers, a $100 million investment at the University of Wisconsin-Madison and partnerships with other emerging industries.

Michael Farren, a researcher with George Mason University's Mercatus Center, who has been studying government subsidies and has focused on Wisconsin's deal with Foxconn, said even an amended deal is unlikely to benefit the state.

Farren and his research partners first released a study on Foxconn in 2019, finding government subsidies could reduce economic activity in southeastern Wisconsin.

"It’s easy for political challengers to criticize the deals made by current office holders, as Evers did during his gubernatorial campaign," Farren said. "But once elected it’s hard for those same politicians to avoid the siren song of using subsidies to claim credit for job creation. It would be hubris to expect the next deal with Foxconn to be any better."

Farren has not reviewed the new deal.