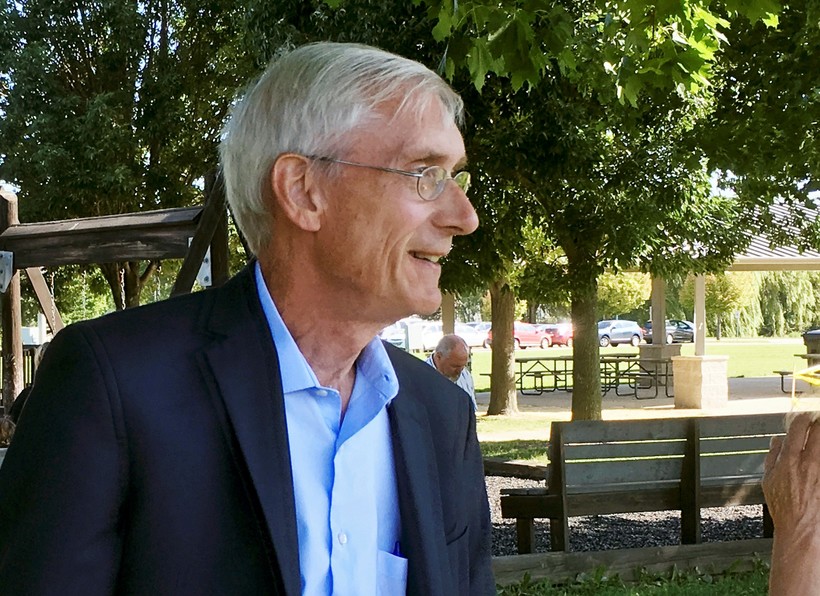 Democrat's Radio Ad Is The Most Direct Attack Yet Against Governor's $3B Foxconn Deal
By Shawn Johnson
Share:

One of the Democratic candidates for governor is running a radio ad attacking what he's calling "the Donald Trump, Scott Walker $3 billion deal for Foxconn."

"Sounds good for Foxconn, but what's in it for the rest of us?" says Tony Evers in the minute-long radio spot unveiled by his campaign Monday. "Just think if we invested that money in our schools instead."

Other Democratic candidates for governor have also criticized the massive incentives package to bring a Foxconn manufacturing plant to the state, which passed the Wisconsin Assembly earlier this month and is awaiting action in the state Senate.

But the ad by Evers, who is Wisconsin's superintendent of the state Department of Public Instruction, marks the most aggressive attack yet by a Democrat against a deal Walker and his campaign have touted as a "once-in-a-century opportunity" and an example of the governor delivering results.

"Have you heard the saying, 'If it's too good to be true, it probably is?'" asks Evers as he opens the ad. "Well the Donald Trump, Scott Walker $3 billion deal for Foxconn might sound good until you look at the fine print."

The Evers ad also attacks the estimated 25 years it would take for state government to "break even" with Foxconn, the exemptions the company would receive from environmental permits, and the lack of any ironclad guarantee that the jobs generated would go to Wisconsin residents.

Asked about Evers' ad during a stop in Milwaukee, Walker dismissed the idea that spending more state money on Foxconn would hurt schools, alluding to the budget he proposed earlier this year that would increase K-12 spending on public schools by $648 million.

"Some people think it's an either-or proposition," Walker said without mentioning Evers by name. "We can do both. Push for more family-supporting jobs at the same time we invest more into K-12 education than ever before."

Other Democrats who have formally announced they're running for governor include Milwaukee businessman Andy Gronik, and Eau Claire state Rep. Dana Wachs. Both Gronik and Wachs initially said positive things about the Foxconn announcement, but they've since said they oppose the deal because of what the state is giving away to land the company.