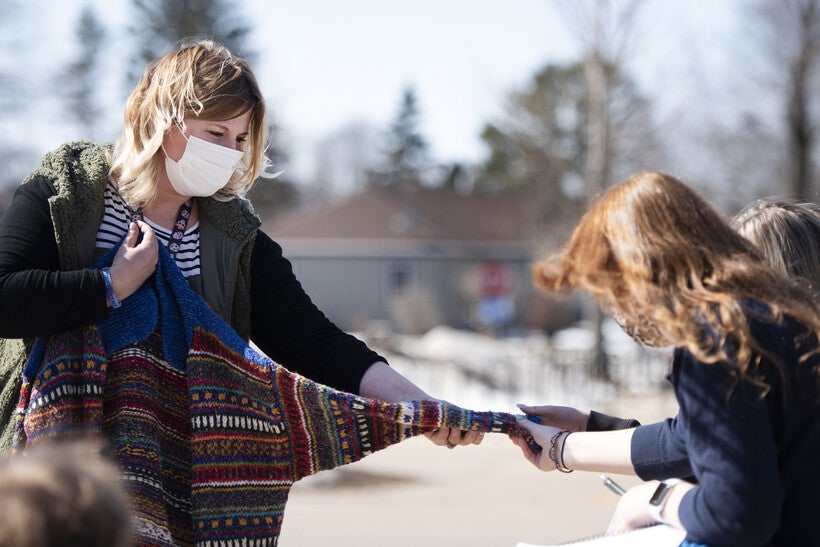 Even For Those Teaching In Person, This School Year Is A Long Way From 'Normal'

Learning Cohorts, Distanced Desks And Masks Are Just A Few Of The Differences COVID-19 Has Brought To Schools
By Madeline Fox
Share:

The majority of Wisconsin schools started the year with at least some students learning in person, and more have brought students back into classrooms as COVID-19 cases have slowed from their November peak and teachers have started getting vaccinated. Still, teachers are quick to note that in-person school is not "back to normal."

Breanne Kanak teaches art to all grades at the Wabeno School District, a northeastern Wisconsin district of about 400 students. The district has been teaching students in person since the start of the school year — though about 20 percent have stayed virtual.

Even for those in person, though, classes look different. As Kanak travels between elementary school classrooms pushing her art cart full of supplies, she said she frequently points students toward her "Emperor’s New Groove" pin that reads "No touchy!"

In her middle school classroom, she’s separated out each of the tables, which are usually pushed together into groups, so that students can distance from each other. Her room has plastic dividers meant to keep the students from breathing on each other, though she said those haven’t helped much.

On Wednesdays the district goes all-virtual, and Kanak uses that time to plan.

"I’m planning for the next four days ... getting all the supplies ready. If they’re shared supplies, I have to meter out when I’m going to have them, and which kids are going to use them, and how much I trust them to use them the right way," she said. "I do individual supplies for each project so I can switch out what’s on the cart, because there will always be the touchy kids who want to go in and grab stuff."

Even though most of her students are in person, she said she spends about half her time on virtual learning, making video versions of all her elementary school lessons to post on YouTube, and then connecting separately with her virtual high schoolers. 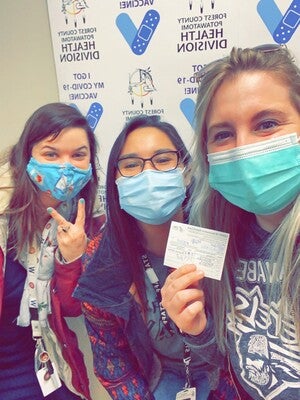 "When I’m recording videos for kids that are (grades) K through three, I have a different personality than my kids who are (grades) four through six," she said. "Of course, high schoolers think that they’re the coolest thing since sliced bread, so I have to be cool and chill with them, and can’t be too enthusiastic, otherwise they’ll be like, 'You’re a dork."

It’s a lot of work that she said leaves her depleted at the end of the day. At home, she said she’s a lot quieter than she used to be, since she’s burning a lot of that outgoing energy trying to be expressive through a mask or a computer screen.

In Green Bay, students have just started going back to school buildings. They had a week of cohort learning — half the students in person and half virtual one day, then switching who was in person the next — then spring break, and are all-virtual this week as an extra precaution in case families picked up COVID-19 during their vacation. They’ll be back to cohorts for the next two weeks, and then to all students in person four days a week beginning April 12.

Seventh grade and English-language learners teacher Sarah Pamperin said it was an adjustment, figuring out how to get all the students on Zoom without a distracting echo inside the classroom. All her in-person students still log on to the virtual classroom, mute themselves and then partner with a virtual learner during group work.

"They were actually really thoughtful, I think, the kids who were in class, of making sure the kids that were at home knew what was going on and felt included," she said. "If they said something here in class, they would say it with the microphone on so that everyone could hear it, not just the kids in the classroom."

She said she keeps boxes with "would you rather?" and "who’s in the room?" game-style questions to keep kids occupied if she needs to spend a few minutes working out technical kinks.

"They’ve all had technology issues over the last nine months, so they get it," she said. 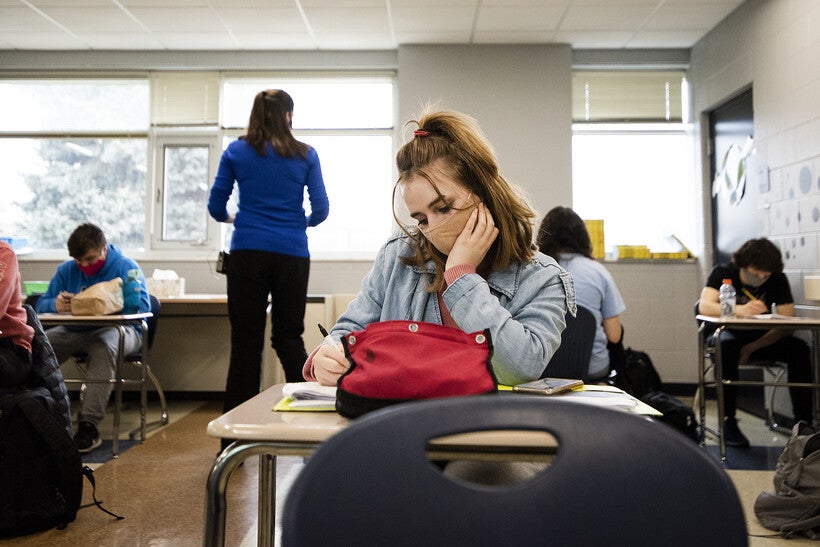 She warned her students up front that in-person learning wouldn’t look like it had last fall and winter, and that coming back into the classroom could be disappointing. She said she was surprised by how well they took that in stride, and have adapted to pandemic safety protocols.

"I think they still were able to have their social time, which I think a lot of them were really missing," she said. "It was just really hard feeling like we were incomplete, like we were missing half the class all the time."

During the week of cohort in-person learning, she said some students showed up who hadn’t logged on to virtual classes all year.

"We made so much headway with them in those two days, but then they went back to virtual and disappeared again," she said.

One of the concerns that came up repeatedly during a reopening debate at the Milwaukee Public Schools board earlier this week was that in-person classes wouldn’t look much different than virtual learning, but would present added risks.

That virtually-in-person model has been the case for Pamperin’s Green Bay students — though she said it’s an improvement, both for her students, who get to socialize more, and for her teaching style.

"I’m a better teacher when kids are in person," she said. "I have a lot more energy because I think a lot of teachers feed off the energy that their kids bring. I just feel like myself again."

'For The Good Of The Group'

Melissa Baier de Garcia, a high school Spanish teacher in Janesville, has had in-person students all year. Like Pamperin, her students were divided into two cohorts, which kept class sizes to 14 students or fewer. She moved all her classroom desks 6 feet apart and marked the spots on the floor with tape, so she and her students can push them back into place if they shift during the day.

"They’ll put up with whatever constraints they have to deal with — that’s mask wearing, that’s me walking around with hand sanitizer, it’s cleaning their desks — these minor inconveniences, they know that it’s for the good of the group, and they see the larger picture and the value of being here," she said. 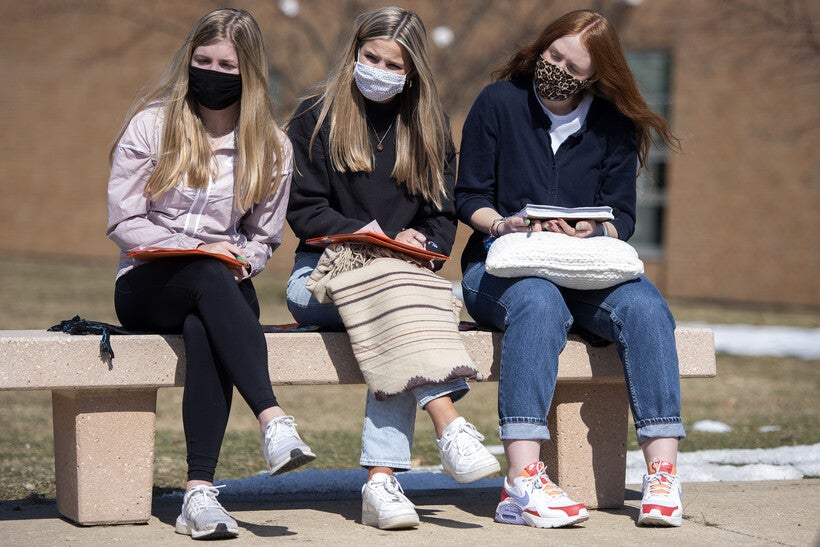 As a language teacher, she said, it’s important to spend as much time speaking and working in Spanish as possible. That’s tricky when she only has students a couple of days a week.

"Seeing me like every other day, and the assignments I give them at home, it can’t replace that 47 minutes I would have had with them last year, every day," she said.

At the same time, the smaller class sizes make it easier to get through lessons more quickly, and give more individual feedback to her students.

"My students are writing this essay in class, and I was able to walk around and individually speak to every student and read all their sentences, where before I might just have to skim, trying to get through 30 students or 32 students in 47 minutes," she said. "Having the smaller classes, I feel like we’re really not that far behind, because we are able to get through the material and move on just because of the nature of the smaller group."

Baier de Garcia has had numerous students who contracted COVID-19, she said, noting that many of them had parents or family members working in health care who were exposed to the virus.

"For some of them, they said that was the sickest they’d ever been in their entire life," she said.

Pamperin, too, said she had a lot of students contract COVID-19 well before they started coming back to school. Many of their families work in Brown County’s meatpacking plants, which drove one of Wisconsin’s early spikes. Pamperin herself got COVID-19 several months ago.

In Wabeno, Kanak said entire classes or grade levels quarantined multiple times, especially earlier in the pandemic. She’s had students get sick, and has also seen it take a toll on the community, especially local tribal members, who lost many of their elders to COVID-19.

It’s also exacted a mental toll on their students.

"I don’t think they realized how hard it was hitting them until they saw how many kids were virtual, especially at the high school level," she said. "That part of it has been hard, to see kids that are separated from their friends, and the people that are their touchstone people, and how they adjust to it, or not."

Pamperin’s voice broke when she described one conversation with a student: "I had one kid say something like, 'You haven’t hugged me yet,' and I’m like, 'Oh honey, I can’t — I love you, but I can’t,'"

"Those are hard moments," she said, "because like I can’t show the love that I usually give them."