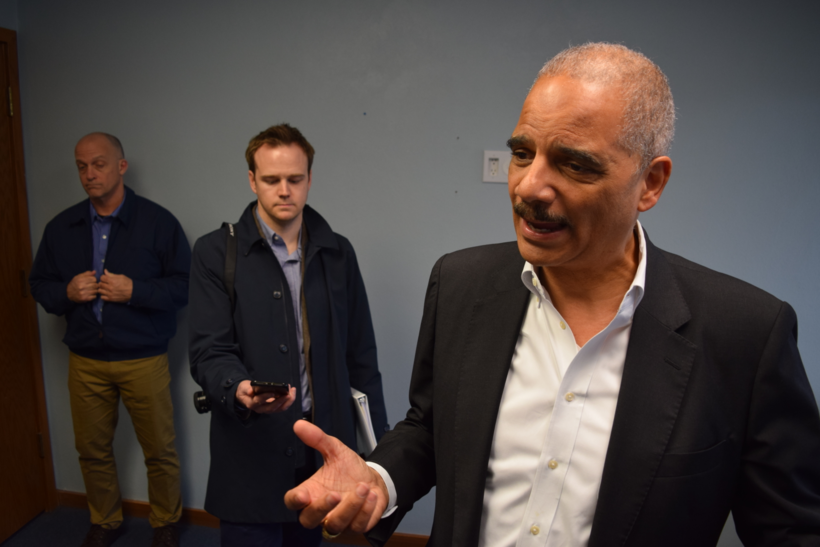 Group Run By Former US Attorney General Has Pledged To Spend $350K In Race
By Shawn Johnson
Share:

Former U.S. Attorney General Eric Holder visited Madison on Thursday to campaign for state Supreme Court candidate Lisa Neubauer, telling an audience of Democratic organizers that they'll win if they get progressives to the polls.

Holder, who led the U.S. Department of Justice under President Barack Obama, now runs the National Democratic Redistricting Committee. An affiliate of the group has pledged to spend $350,000 on behalf of Neubauer, who is currently a judge on the state court of appeals.

Holder has kept a steady presence in Wisconsin the past two years, visiting the state in 2018 to campaign for state Supreme Court Justice Rebecca Dallet and Gov. Tony Evers. Holder also had a hand in taking former Gov. Scott Walker to court to force him to call two special elections in vacant legislative districts.

Hagedorn was Walker's chief legal counsel for several years before Walker nominated him to a judgeship.

Both the state Democratic Party and the state Republican Party are also involved in the court race.

"Holder continuously put(s) partisan politics over the rule of law as Attorney General," the Republican Party of Wisconsin tweeted Thursday. "Despite her claims of being 'fair and impartial,' (Neubauer) has proven to have these same priorities in mind for the Supreme Court."

Speaking to reporters in Madison, Holder brushed those criticisms aside.

"It's not as if Republicans aren't doing the same thing," Holder said. "I'm just dealing with the reality of the situation. I'm proud to be here, and I'm proud to support Lisa."

Neubauer told the Milwaukee Journal Sentinel she did not want Holder's support and she would recuse herself from cases involving his organization if they come before the state Supreme Court.

"In some ways that's reflective of why I support her," Holder told reporters.

Editor's note: This story has been corrected to state Eric Holder was in Wisconsin on Thursday.