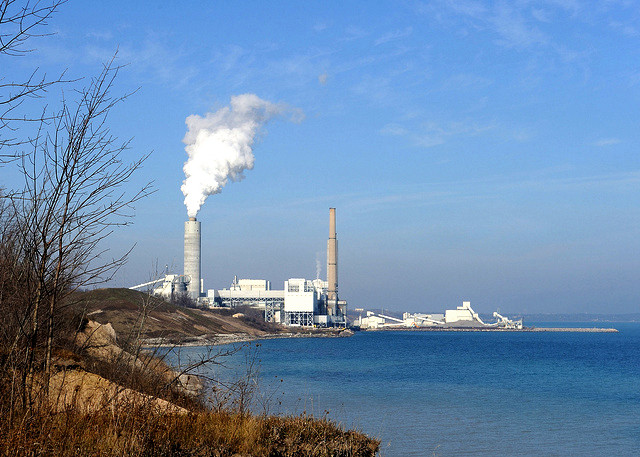 Clean Wisconsin Contends 1 In 5 Wells In Southeastern Wisconsin Have Been Contaminated With Molybdenum
By Chuck Quirmbach
Share:

A new study from a Wisconsin environmental group has found that when the ash from coal-burning power plants is used in places like construction projects, some harmful chemicals can wind up in drinking water.

Coal has been burned at the We Energies coal-fired power plant in Oak Creek in southeastern Wisconsin plant for more than 50 years, and decades ago some of the ash created was buried in pits not far from local groundwater.

Ann Michna lives in a house in the village of Caledonia about one mile south of the plant. Despite living so close to Lake Michigan, the Michnas’ house uses water from a well. That well has high levels of boron — one of the potentially harmful chemicals in coal ash. Michna said that she won't drink the tap water, and won't let her animals or visitors do so either.

Ann Michna’s family — which includes her husband Frank Michna, their children, and pets — all drink bottled water. Frank, who's part of a family that has lived in Caledonia for 160 years, said he blames We Energies coal ash for spoiling his tap water and causing health problems. He said the company should be held accountable.

“They tried to cover it up and say, ‘Well we’re doing the right thing now.’ But you didn’t in the past, and you need to pay for that,” he said.

We Energies said it’s been following tougher laws on coal ash disposal since those took effect more than 30 years ago. The company also says a Wisconsin study a couple years ago found that the Oak Creek Power Plant ash could not be definitively tied to higher levels of chemicals like boron and molybdenum in local groundwater.

Recently, however, the environmental group Clean Wisconsin issued a report that contends that more than 1 in 5 wells across Racine, Kenosha, Waukesha and Milwaukee counties are contaminated with molybdenum at amounts above the state health advisory level. Clean Wisconsin's Tyson Cook said the problem is that  construction firms have used the ash as fill material under roads, schools and other buildings.

“The closer the homes and buildings were to coal ash reuse sites, the higher the levels of molybdenum contamination they had on average,” said Cook.

Cook urges the Wisconsin Department of Natural Resources to make several changes in its regulations and authorize more studies on coal ash contamination of drinking water. The DNR's Ann Coakley said that more study is possible, but said that she finds fault with Clean Wisconsin's report.

“At this time we really do not concur that there is a clear correlation between the elevated molybdenum in groundwater and the beneficial use of bottom ash from coal-fired power plants,” said Coakley. “We also know that there’s evidence that molybdenum is a naturally occurring metal in Wisconsin soil and rock formation — and that was only brushed upon in their report.”

The Clean Wisconsin report comes about a month before the U.S. Environmental Protection Agency is scheduled to issue federal coal ash rules. Environmentalists say the problems they believe exist in southeastern counties could also exist near other coal-fired power plants in the state and U.S. But We Energies spokeswoman Cathy Schulze said her company is fine with the current Wisconsin regulations.

“Well, we oppose the designation of coal ash as a hazardous waste,” she said. “We believe that the current WDNR rules concerning coal ash landfills and beneficial use rules are appropriate regulations.”

Schulze said that if coal ash wasn't re-used in construction, there may be more and bigger coal ash landfills. But environmentalists say that already, too many people like the Michnas in Caledonia believe they need to drink bottled water.